Wrapping Up 2020: R5-P8 from Star Wars: The Black Series Phase III by Hasbro 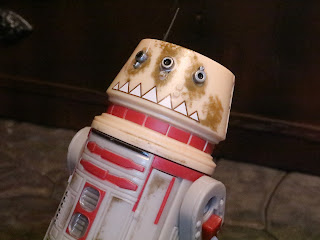 Yes, it's officially 2021 but I've still got a dozen or so figures that I picked up in December or received for Christmas that I need to review so let's get started with wrapping up 2020 by taking a look at R5-P8. R5-P8 is part of the Target exclusive Galaxy's Edge Trading Outpost subset of The Black Series and is intended as the droid companion of Hondo Ohnaka, another figure releases in the Galaxy's Edge subset. I haven't gotten my hands on Hondo yet but I'm about to just bite the bullet and order one because I doubt we'll see him again. Anyways, R5-P8 did appear in a few episodes of The Clone Wars but he's also part of the ride Millennium Falcon: Smuggler's Run, which is what this version of the astromech droid is based on. Let's take a quick look at R5-P8 after the break... 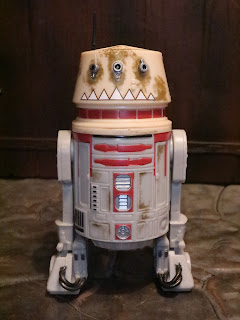 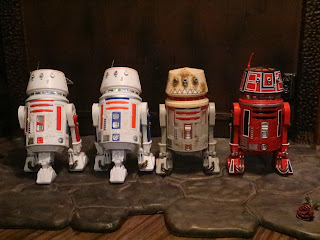 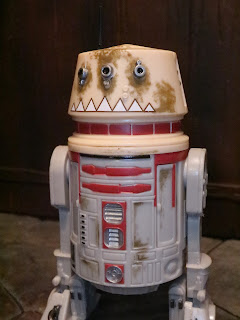 * We've seen this droid body multiple times and while it's been used over and over it's still a very good sculpt. The paint applications are what differentiate the different droids and while red highlights isn't unusual on an R5 unit the teeth-like paint details on the dome are. It definitely makes R5-P8 looks... fierce, I guess? I like it but I'm not sure if it's intimidating or endearing. Originally part of the Ohnaka Gang, the version o R5-P8 in The Clone Wars sported a blaster mounted on his dome but that's not present here. 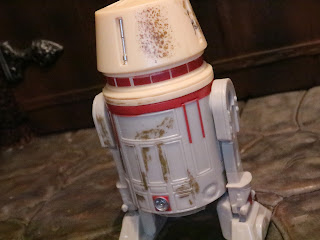 * R5-P8 is covered in random bits of dirt and dust. Whether this is from Batuu or just from years of neglect by Hondo is unknown. Actually, the dome looks kind of rusty which was present in The Clone Wars, so I'd lean on the neglect side. 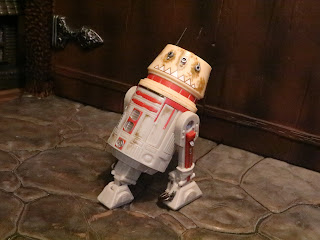 *  Since he shares the same body as every other astromech droid in the line, R5-P8 also features a retractable third leg. Rotate his head and the leg descends (rotate his head the other way and it goes back up into his body). It works well and nicely gives him a few different display options. 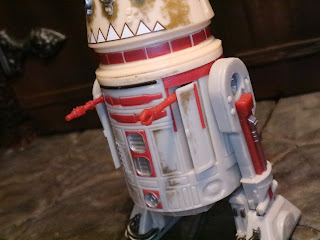 *  Again, since he shares the same body as the original R2-D2, RP8D4 features the two hinged panels on the front of the body that open up. Inside is a hinged claw arm on the left and a data port/ universal computer interface arm on the right. He also has the removable side panels so you could add jets or other side panels from previous droids to customize your figure a bit. 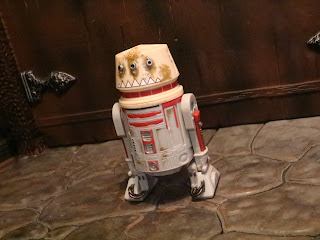 * So, this is pretty much like beating a dead horse at this point but the astromech droids in this line are actually too small. At this point I expect that R2-D2 might be the only droid to get a fix as it would be weird to have every other droid out of scale with the rest. Still, it's a negative. 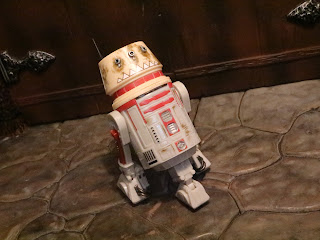 Like the rest of the R5 units I've reviewed, the droid itself is decent with nice paint applications and a good sculpt but the fact that we don't get any of the extra parts is a bit frustrating and makes this figure rather lackluster. How cool would it have been to at least give R5-P8 the blaster attachment like he sported in The Clone Wars? Then you could have either a Clone Wars era version or a Galaxy's Edge version? Alas, he's kind of lackluster and a victim of the $5 Hasbro exclusive tax. I'm giving R5-P8 an Eh and a 1/2. Completists will want him but most folks can pass him by.