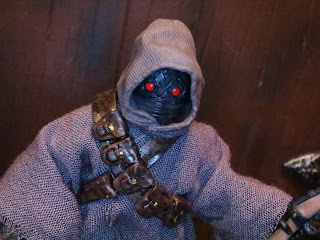 Despite the number of movies we've had lately, The Mandalorian really feels like the first Star Wars thing since The Force Awakens to really make an impact on pop culture and it's a real shame that Hasbro didn't seem to be prepared for it. I haven't even been able to track down the Mandalorian himself yet! Hasbro really offered about the minimum of what they could for The Mandalorian, which feels like another instance of Hasbro not having the opportunity to see much of the show in advance and thus having to stick to limited publicity stills and such to craft the toyline. For the Black Series we only have four figures: Cara Dune, who is excellent, The Mandalorian, who is impossible to find and outdated by the second episode, IG-11, who is a repaint with a new bandolier, and the Offworld Jawa, who is a repaint of the 40th Anniversary Jawa with a new cloak. Does that seem to be a lineup that gives the impression Hasbro had enough time or the confidence to craft a full lineup for The Mandalorian? Today I'm checking out the Offworld Jawa, one of the transplants from Tatooine who now dwells on Arvala-7. The Offworld Jawas appeared in Episode 2: The Child (one of my favorites of the season) and were part of one of the best action sequences on the show. Let's check out the Offworld Jawa after the break... 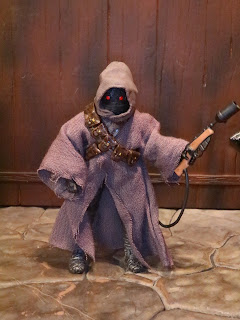 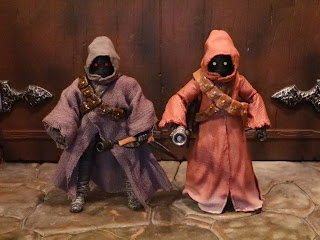 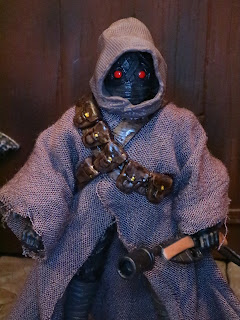 *The bandolier is even nicer on this figure than on the standard Jawa. It's the same bandolier (still not removable) but with a better and more realistic paintjob this time around. 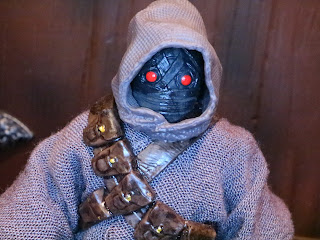 * Also like with the standard Jawa, the headsculpt is excellent. The hood is is a separate piece attached to the head, meaning it both adds depth to the figure's appearance as well as allows for better head movement. The interior looks like it's covered in strips of black cloth (this seems film accurate) and features the unusual red eyes of the Offworld Jawas. 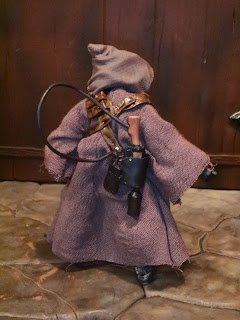 * Here's a look at how the robe looks hanging down from the back. I think it looks really fantastic, particularly when posed. It does have some fraying on the edges but I believe that is entirely intentional to give this guy a worn, rugged appearance. 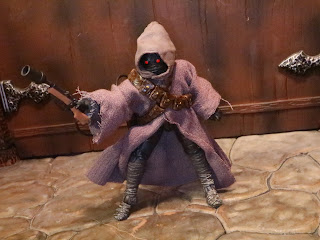 * While his arms are still a bit limited, the cloth robe now allows for full lower body articulation, making this guy a lot for more fun to play with than his Tatooine brethren. 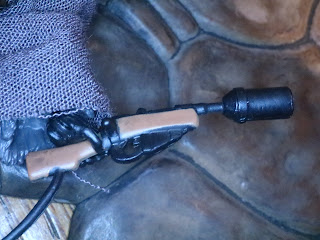 * Hasbro didn't change the weapons up much, so they're still based on the Tatooine Jawa weapons: This ion rifle looks like the one a Jawa uses to shoot R2-D2 in A New Hope. The sculpt is nice and it features a variety of paint applications to call attention to all of the details on it. It is attached to a cord that is attached to a battery pack on the Jawa's bandolier, meaning it is not removable. More on that in a moment. 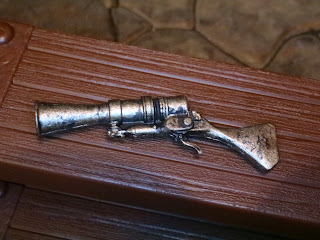 * The second ion blaster is the model I always think of first (probably because the POTF2 version included one like it) and it's always been my favorite. The paintwork is nice; it looks even more distressed and rugged than the blaster included with the standard Jawa. 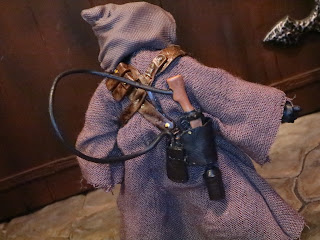 * Just like the previous release, the back of the bandolier has a battery pack for the attached ionization blaster and a holster to store it in. The holster looks decent, but the fit of the blaster in there is really, really tight. I'm kind of nervous to stick it in and pop it back out considering that the barrel of the ion blaster is a rubbery.

* The non-removable battery pack/ blaster also is just awkward with a cord that gets in the way. 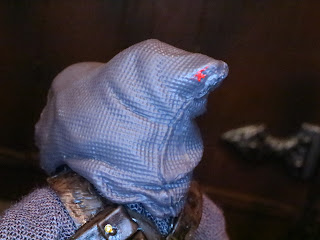 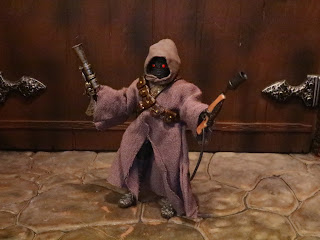 Thanks to the addition of the cloth robe, the Offworld Jawa is definitely the better of the two Jawa releases in The Black Series thus far. The cloth robe just feels better and it allows for better articulation which is greatly appreciated. The Jawa is still a small figure, though, and including the egg from the second chapter of The Mandalorian would have been nice. It's doubtful Hasbro knew that much about it, though. This guy's a Good and a 1/2 figure and while he's a glorified repaint, he's a better glorified repaint than his predecessor.


If Jawas are your thing make sure to check out my review of the 40th Anniversary Collection Jawa
and the Micro Machines Jabba/ Mos Eisley Spaceport Transforming Action Set which includes a Jawa riding a Ronto.