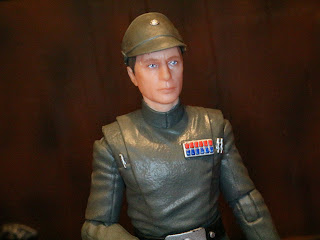 While this is the first Christmas season in a few years that we don't have a Star Wars movie to look forward to, that doesn't mean that Hasbro is skimping on the toys. 2018 has probably been the best year ever for the Black Series since the line debuted in 2012 thanks to the robust character selection and the newly debuted face printing technology. While Hasbro certainly has delivered a fairly robust Solo line this year, they've also done a fantastic job of filling out the cast of the Original Trilogy. In that respect it's kind of nice to have a large gap between The Last Jedi and Episode IX as it gives Hasbro more time to focus on releases from previous films. There have been a lot of exclusives this year (it's really quite crazy) and one of them is the shared online exclusive I'm reviewing today: Admiral Piett. Appearing in both The Empire Strikes Back and The Return of the Jedi, Admiral Firmus Piett is the commander of the Executor, replacing the late Admiral Ozzel. Other than Grand Moff Tarkin, Admiral Piett is easily the most quotable of the Imperial officers so enjoy having Piett opine on bounty hunters, talk about older codes, or simply respond to Darth Vader. There's no end to the fun you'll have with Admiral Piett! Let's check this one out after the break... 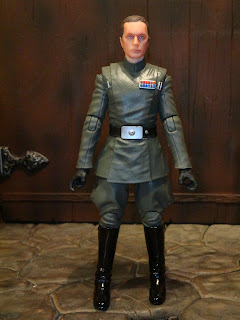 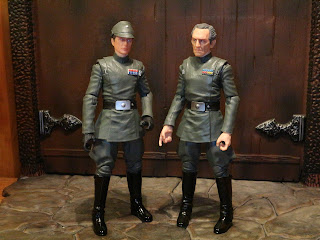 
* Here's a quick look at Admiral Piett next to Grand Moff Tarkin. Most of the Imperial officers use pieces from Tarkin and Piett is no exception. While the torsos have been reworked (to account for the code cylinders and plaque) the arms, legs, and waists seem to be the same. 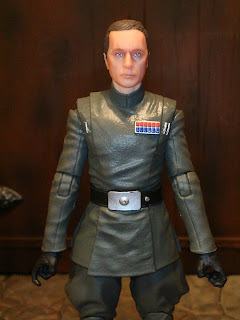 * Admiral Firmus Piett is a shark looking figure. He's clad in the standard Imperial officer's uniform with rank plaque, code cylinders, and belt breaking up the grey. He's also wearing gloves to complete the look. While most Star Wars Black Series figures are completely unique sculpts, Hasbro had wisely been using the Imperial officer sculpts to crank out more figures in a shorter time. I, for one, am in favor of that. 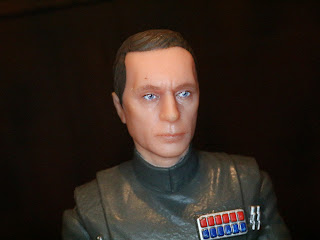 * The headsculpt looks exactly like actor Kenneth Colley and is definitely a great example of the brilliance of Hasbro's work using the face printing technology. The level of detail on the sculpt, particularly around the eyes, is exceptional. 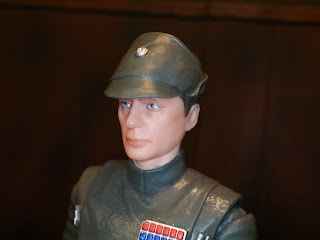 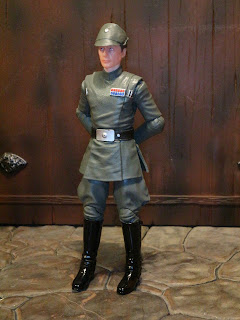 * The articulation is excellent. While Firmus Piett mostly just stands around talking through viewscreens  or checking out codes, it's nice to know he can join the action if he needs to. Piett is sturdy and well made, so have fun and go crazy with him. 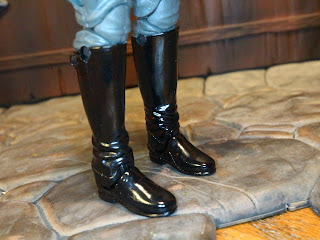 * These officer's boots are shiny and intimidating. The Empire might be absolutely evil but they sure are snappy dressers. 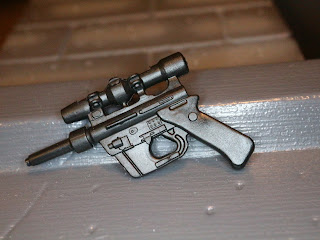 * Also like General Veers, Admiral Piett includes a DL-21 blaster pistol without the fancy muzzle. It looks great and seems to be the weapon Hasbro is giving to most of the Imperial officers. It's a great blaster design and it is tremendously well sculpted. 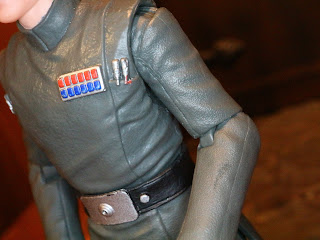 
* If you look closely, you can see some paint slop on Piett's code cylinders and on his left arm. He still looks pretty swell overall but the work isn't as clean as I would have hoped. 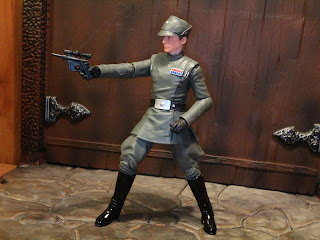 Admiral Piett is a Good and a 1/2 figure and another solid entry in the Black Series. He's very well made but he doesn't have the cool extras like Tarkin's Interrogation Droid or General Veer's extra armor. He's also a few bucks more expensive since he is a online exclusive, so his price varies a bit. I'm still thrilled to have him and I'm loving having an expanding Empire, but he isn't as thrilling as some of the other releases, though. Still, Original Trilogy fans probably just can't resist this guy, right?

I do believe this is the first action figure of Admiral Firmus Piett I've reviewed on this site. For more reviews from Star Wars: The Black Series, check out the following: