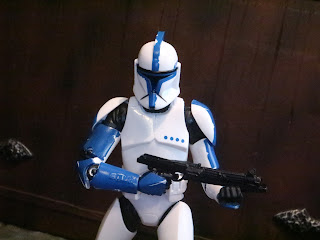 For a few years Walgreens was a happening place to find action figures. They seemed to have a decent stock of stuff and were always getting cool new exclusives that were fairly easy to find along with lots of seasonal goodies. Over the last year or so Walgreens has become pretty stagnant. They still get stuff but they seem to get one or two items at a time. They also hold on to older items for years (the Walgreens closest to me still has a Finn figure from 2015 and Cassian Andor from 2016.  Anyways, Walgreens got a new Star Wars: The Black Series exclusive at the end of 2020, the Phase I Clone Trooper Lieutenant, and I didn't see him at any of the Walgreens stores near me. Factor in that with it currently being not a good idea to go out and hunt for figures at multiple stores and I decided to just snag one off Ebay. Oddly enough, I basically got this guy for retail. That's bizarre, huh? Anyways, the Clone Trooper Lieutenants commanded platoons of 36 troopers and they first appeared in Episode II: Attack of the Clones. Let's take a look at the Phase I Clone Trooper Lieutenant after the break... 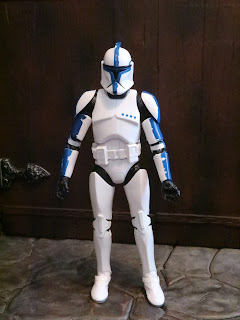 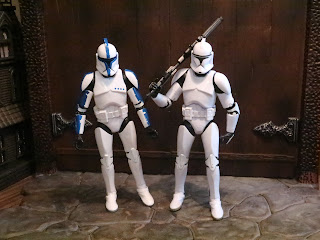 * The Phase I Clone Trooper Lieutenant (left) doesn't use the new sculpt introduced in The Black Series Phase IV but, instead, uses the sculpt from the first Clone Trooper back in Phase I. It's kind of disappointing that Hasbro had the new body sculpts around and didn't utilize them here, isn't it? 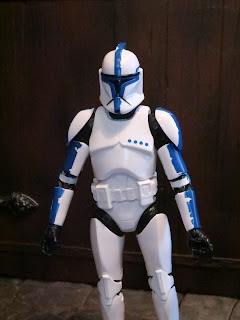 * The body is one we've seen multiple times but this time the Clone Trooper armor is adorned with the blue highlights of the Clone Trooper Lieutenants. The earlier clones used a standard ranking system, although later on they adopted different color schemes based on their different division and theaters of operation. Hasbro's armor sculpting has always been solid in the Black Series, so this guy still looks good despite this being a 6-7 year old mold at this point. 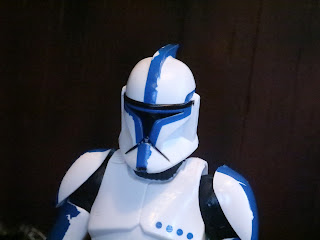 * The helmet shares the same blue highlights as the armor. The paint highlights look like they've been weathered a bit by battle and it does make the figure a bit more interesting, though I could understand some collectors wanting a plain, clean Clone Trooper Lieutenant. 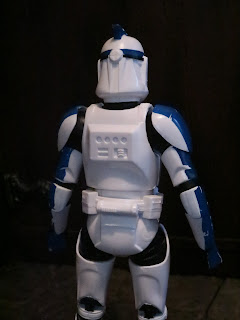 * The back of the armor is nothing new but all of the detail you'd expect to find is here, including the explosive device on the back of his belt. 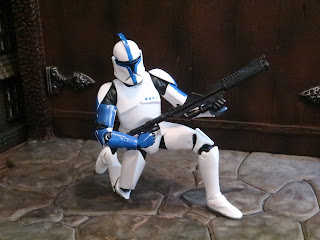 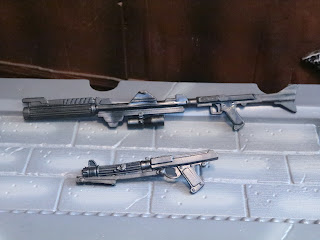 * The Clone Trooper Lieutenant comes with the same two blasters almost every other previous Clone has come with: The DC-15A and the DC-15S. The DC-15A and DC-15S are the same as the previous molds and still looks just fine. 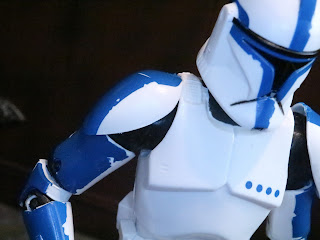 * The older Clone Troopers have shoulder pads  that bump against the chest, meaning the articulation is very inhibited. Considering Hasbro has been fixing these on newer sculpted figures its more disappointing that these still exist. 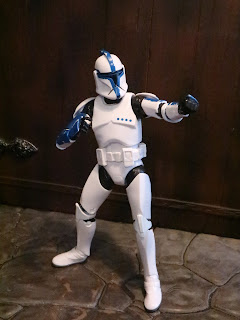 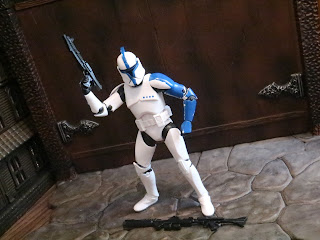 At one point the Black Series Phase I Clone Trooper sculpt was one of the most impressive in the line with unsurpassed articulation. It's now 6-7 years old and it has been easily surpassed by the new sculpt of the Clone Trooper. It's really a shame Hasbro didn't use the newer body for the Phase I Clone Trooper Lieutenant. That would have made for an excellent figure. This guy's not terrible or anything but he's definitely dated. He's a Good and a 1/2 figure and if you see him you'll probably want to grab him, but he's more to fill out the Phase I Clone Trooper roster than being terribly exciting on his own.