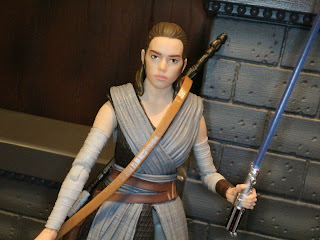 While Hasbro has yet to release a 6 inch version of Rey in the outfit she wears at the end of The Force Awakens (don't worry, it's coming soon!), we already have an action figure of Rey based on at least one of her appearances in The Last Jedi: Rey in her Jedi Training outfit. Rey is an excellent figure but she definitely still shows off Hasbro's primary weaknesses with this line due to a headsculpt that is a bit off. While they do an incredible job with characters without living actor/actress counterparts and non-humans, they seem to have a tough time capturing likenesses. Still, Rey also shows off many of the strengths in this line: Nice accessories, functional holsters, and unexpected costume details. Let's take a closer look at the (presumably) major hero of the Sequel Trilogy after the break... 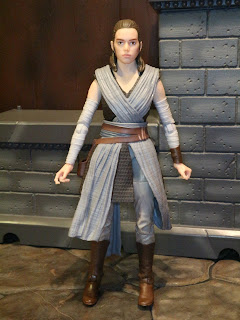 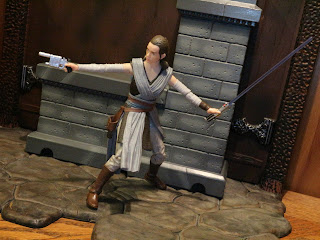 * Rey's articulation is really good. The Black Series figures are essentially built like the female Marvel Legends figures meaning that they can move pretty well. Not as well as a Marvel Legends figure, but close. Rey is a durable, well articulated action figure that is really fun to play with. Having three different accessories to utilize also helps to inspire your imagination in giving her some cool poses. 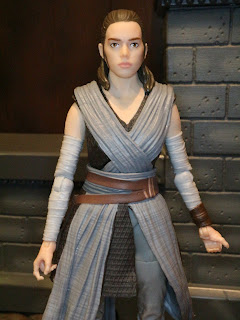 * I like this costume. It has some similarities to Rey's standard TFA costume with the crossed fabric strips held together by a belt and the arm wraps, but the black tunic underneath is quite different. The colors are too. I like the bluish-gray fabric. Is this just what Rey has laying around extra or is this something that pays homage to Luke's Jedi order? 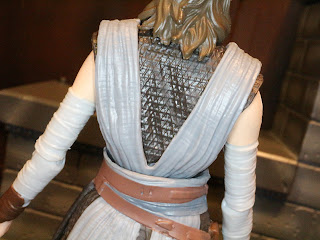 * The texture on the tunic Rey is sporting underneath her "robes" is really cool. I like the material. I'm also liking the noticeable textures on the fabric strips that give it a woven look. It's cool that she kind of has a style while still getting a new outfit. 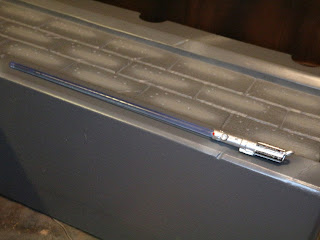 * Of course Hasbro had to include the Skywalker lightsaber. You know, the lightsaber that Anakin built that Obi-Wan took and gave to Luke who lost it on Bespin and somehow made it's way to Maz Kanata who gave it to Finn who used it for a bit but was later wielded by Rey who took it and gave it back to Luke....so far, anyways. Plenty of figures have already been released with this lightsaber, so you know what you're getting here. 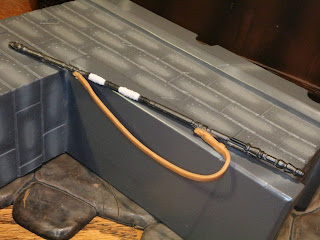 * Rey also comes with her staff. It's not perfect, but it seems to have a bit sharper of a sculpt than the Jakku verson of Rey had. I think the strap is more effectively placed, too, so that Rey can wear it across her shoulders. 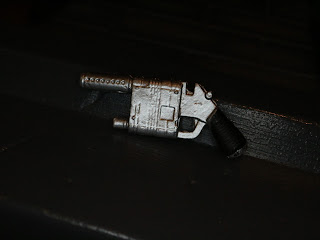 * The accessory included with this release that I was most excited about is the NN-14 blaster pistol that Han Solo gave to Rey on Takodana. This is an incredible design and Hasbro nailed it. The weathering on it is pretty slick, too. I actually bought the die-cast metal Rey figure on clearance to give my Hasbro Jakku Rey this pistol (and a backpack) but I like this one much better. 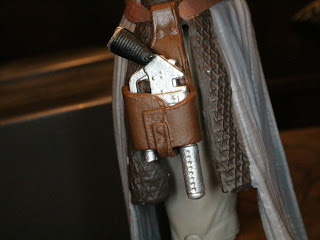 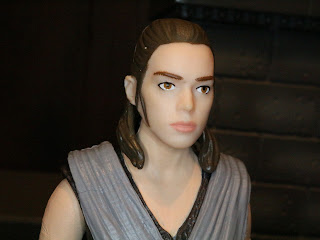 * This isn't a bad looking headsculpt at all; it just doesn't look like Daisy Ridley. I can see "Rey" here, or maybe a really good Rey cosplayer, but I'm not seeing Daisy Ridley. Considering how prominent of a character she is, I hope Hasbro gets a bit closer to the mark with her likeness for the upcoming Resistance Rey figure. 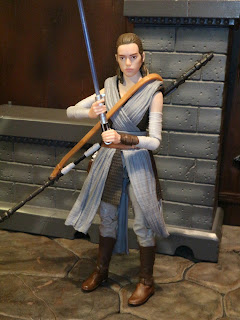 While it seems like action figures of Rey and Kylo Ren have flooded toy shelves for the past two years, picking up these new The Last Jedi versions of the characters really feels very fresh. I love Rey's new outfit. The detail work on this really shows that Hasbro has been making some great improvements with this line. While the headsculpt isn't a perfect likeness, it's still a nice headsculpt. With plenty of accessories and great articulation, Rey is a really fun action figure. She's a Great and a 1/2 Black Series figure! Of course, there is one more Black Series Rey figure that was released on Force Friday wasn't there? Check back soon for another great review...

I've only reviewed a couple of Rey figures, including Hasbro's Black Series Rey (Jakku) & BB-8 and the K-Mart exclusive Rey (Starkiller Base). I've also checked out the Micro Machines Speeder Chase set that includes a micro Rey on her Speeder.

If you're looking for more Black Series figures from Phase III, check out the following: