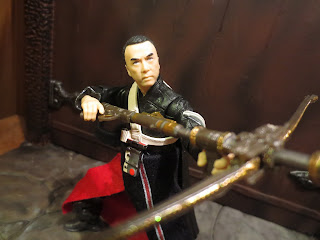 I received the Funko POP! Chirrut Imwe for Christmas but I absolutely still needed this Black Series version of the Guardian of the Whills, too! Chirrut comes packed in the newest series of figures along with Baze Malbus and four repacks. Four! Hasbro, what in the world are you doing? Fortunately, Chirrut and Baze are shipping in solid cases (meaning 8 Chirruts or Bazes) in one case, so hopefully e-tailers won't get hit up with lots of unsold product and can offer these guys at reasonable prices. Chirrut is the first Black Series figure I've picked up in 2017, a year that I'm hoping is very good for this line; not only should we get a 40th anniversary series but we will also get figures from Episode VIII: The Last Jedi! Let's not get ahead of ourselves, though, as it's time to check out Chirrut Imwe. More details after the break... 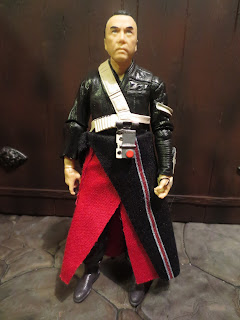 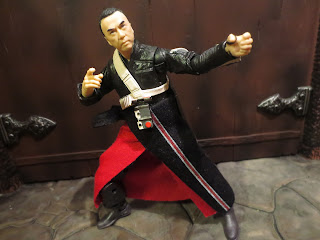 * The articulation scheme for the Black Series hasn't changed much at all since the first series, but it still does the trick. Chirrut can very convincingly interact with both of his accessories as well as take a number of various stances. He's not what you might call "super-articulated" but I doubt you'll have any problem finding a pose you like. The actual cloth robe also helps to keep his leg articulation from being at all hindered. 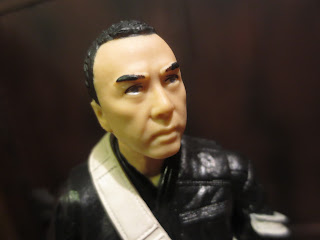 * The likeness to Donnie Yen isn't bad at all. The face sculpt has a lot of detail in it, although it might make Chirrut look a tad bit older than he looks in the film. The eyes are pretty well done, though. It's tough to see in a picture but they definitely look pale blue, showing Chirrut's blindness. 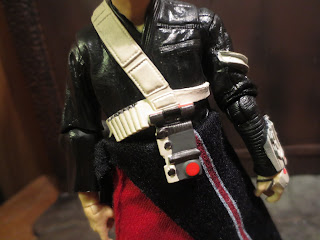 * Chirrut has a somewhat complex bandolier carrying his echo-box transmitter over top of his standard black robes. The echo box features a nice amount of detail and also has a pretty clean paint job. I like all of this being a separate piece, as it adds to the fairly complex look of the figure. 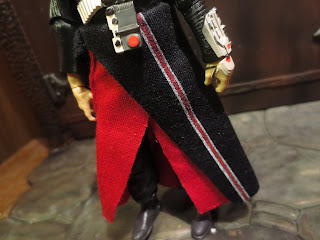 * Hasbro opted to make Chirrut Imwe's lower robes from an actual fabric material. I think this was absolutely the way to go here as while there are still some problems, the ability to actually pose the figure below the waist is well worth the downsides. The red and white stripe on the front is also really nicely crafted. 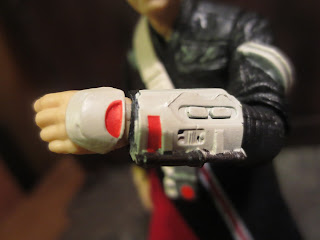 * This device on Chiurrut's right arm is called an impeller gauntlet and it helps to stabilize the lightbow in some way. The impeller gauntlet is attached to both Chirrut's left wrist and his left hand, meaning that the articulation is preserved. It's a pretty cool sculpt and is definitely one of those neat extra details you might not realize the character is sporting at first. 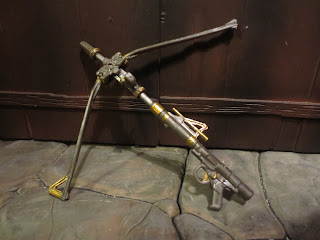 * Chirrut's lightbow is an incredible accessory, quite possibly the coolest we've seen in this line in a while. The sculpt is very detailed, the paint work is neat and clean, and the two arms that feature the polarizers actually open up via hinges. There's a secondary handle on the front of the lightbow that allowed Chirrut to hold this perfectly. 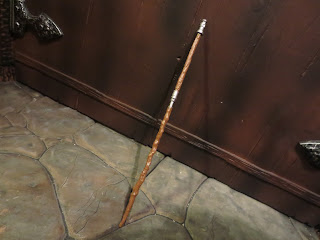 * Chirrut's second accessory is his walking stick. It mostly looks like a simple wooden staff but it does feature a metal handle and metal end. Nothing too fancy, but it seems very film accurate. 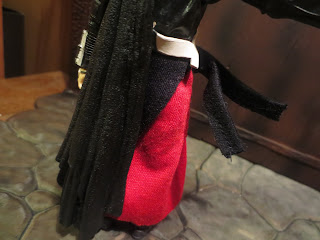 * While I do think that going with a cloth robe was the right choice, I'm a little surprised that the two straps pictured here have such a difficult laying right. They want to pop up as if they're blowing in the wind. Full disclosure: There is no wind in my study where I took this picture. 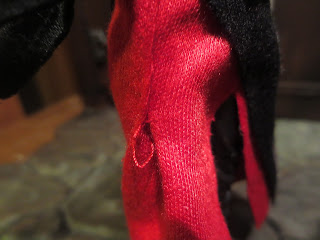 * Overall Chirrut's robe feels very high quality, but there is a loose seam or something on the red part of the robe. 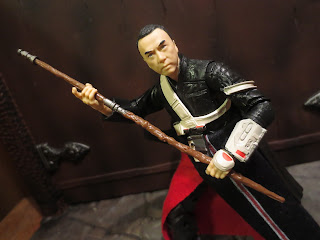 Using cloth material on a 1/12 scale figure always seems like a bit of a gamble but, while it did cause a few problems, it seems like the right choice was made here. Chirrut is one of the strongest figures to come out of the Rogue One roster of characters. For a character who most likely will not ever receive another figure, it's important that Hasbro did him well the first time and gave him both of the accessories he interacts with in the film. This is a pretty definitive version of Chirrut Imwe, and that's a good thing. He's a Great and a 1/2 addition to the line.