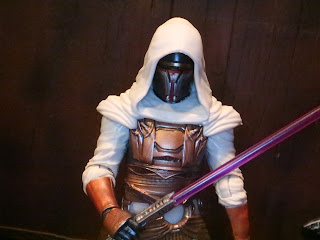 GameStop just released two new Star Wars: The Black Series figures under a new subset title called "Gaming Greats." One was the Heavy Battle Droid from Star Wars: Battle Front II (I reviewed it Saturday) and the other is Jedi Knight Revan from Star Wars: Galaxy of Heroes. Revan has long been a popular character so it's understandable why GameStop and Hasbro would want to offer up a second version of him for the market. Unfortunately, Jedi Knight Revan suffers from GameStop's new price hike: If you preordered him he was $24.99, but in stores now he's marked as $29.99 (though GameStop's online store has him on sale at $24.99). This version of Revan is largely a repaint of the 2016 release, though the repaint really does change the look of the figure. Let's check out Jedi Knight Revan after the break and see how he turned out... 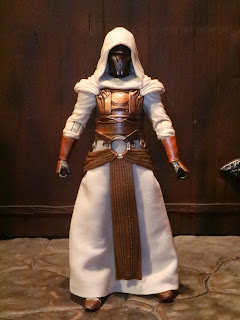 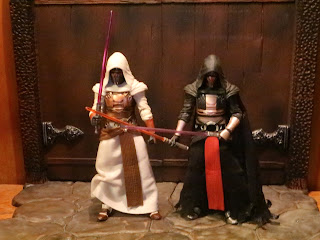 *On the left is Jedi Knight Revan while on the right is the previously released Darth Revan. Both figures use the same molds and come with the same purple lightsaber (Jedi Revan only has one lightsaber) but the robes are different. Jedi Revan doesn't have a cape and his robe isn't ripped and torn like Darth Revan's. Articulation and sculpt wise, they have all the same positives and negatives, so this is going to be a review with a lot of reused text from the previous reviews. Deal with it! 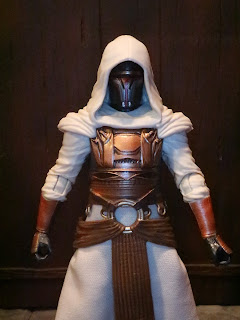 
* Revan's sculpt is quite impressive. The paintwork is sharp and there is quite a bit of interesting detail on this guy. The chest armor actually looks better on Jedi Knight Revan since it's bronze colored with a nice wash to bring out all of the details. I really think Jedi Knight Revan might be the more interesting looking figure. He kind of reminds me of one of the Jedi Temple Guards from The Clone Wars. 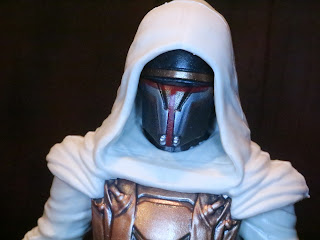 * It was tough to make out all of the details on Revan's helmet on the evil version of the figure since both the helmet and the hood were so dark, but it's actually easier here. The helmet looks very cool with a lot of painted details very neatly applied. 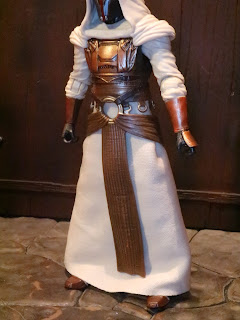 * Rather than a battered and torn cape and robe, Jedi Knight Revan has a very neatly tailored khaki robe that matches the rest of his outfit. It's nicely tailored and looks great in this scale. 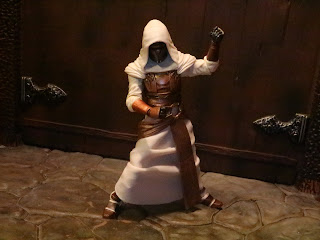 * Overall, Revan has some really nice articulation. Even with his waist robes his leg motion isn't hindered too much. All of the joints below the neck work perfectly and allow you to out this guy in some pretty wicked cool poses. He also feels very solid and sturdy, which seems to be par for the course with this line. 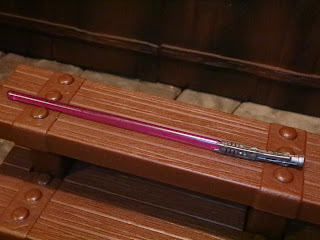 *  This version of Revan only includes his purple lightsaber.  This is not only a cool looking blade but the hilt is incredible. It's very unique and has some teeny, tiny paint details. 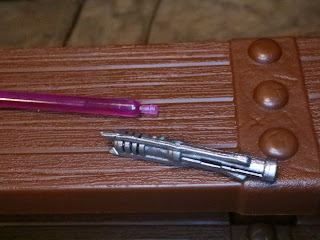 * The lightsaber blade is removable, like most others in the line, but the pegs feel so flimsy that I don't recommend that you do it. Seriously, I wish everyone just came with lightsaber with a blade and a separate hilt piece. 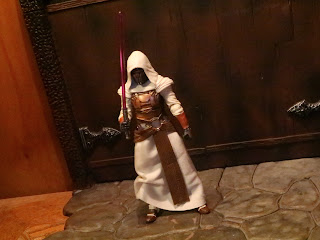 Revan is a popular character, so I imagine the only thing stopping his fans from buying the figure is being able to track one down. He's quite a cool figure although the price is a bit disappointing, especially considering that you're getting less stuff with this release (only one lightsaber, no cape). He's a Good figure overall. Not as good as the actual newer sculpts that Hasbro is putting out, but there's nothing exactly wrong with him. He's just not as impressive as his price tag would lead you to believe.Use your GameStop coupon or one of the sales to bring him down a bit, though, and you'll be happier.

If you're a fan of Revan, check out my review of the Black Series Darth Revan as well.