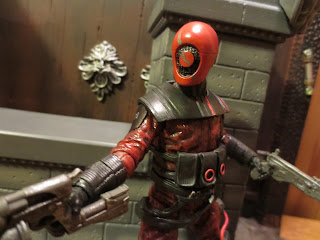 Every time a new Star Wars movie comes out there's always at least one or two figures released in advance that collectors gravitate to simply because of how cool the character's appearance is despite knowing little to anything about them. For Episode 1, the world collectively went notes over Darth Maul. For Episode 2, I remember being incredibly intrigued by the action figures for Luminara Unduli, Jango Fett, and Zam Wesell. For Episode III, I was all about Tion Medon. Some of those characters turned out to be pretty significant. Others were pretty minor. Today I'm looking at a character from Star Wars: The Black Series who could either be a major player in The Force Awakens or just a background character: The Guavian Enforcer. First mentioned in the book Smuggler's Run, the Guavian Death Gang has a perfect Star Wars name. I can totally hear some random character talking about the unscrupulous nature of the Guavian Death Gang or mentioning in passing a run in with the Guavians. This figure seems to represent one of the gang's enforcers, so perhaps this is just a nameless, faceless member of the gang. The guy certainly has some impressive armor, however, and thus has already earned a spot in the action figure line. Ready for a closer look at the Guavian Enforcer? Then join me after the break... 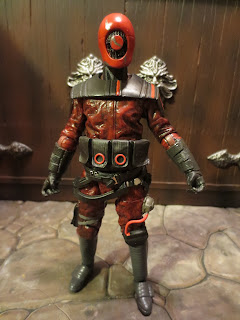 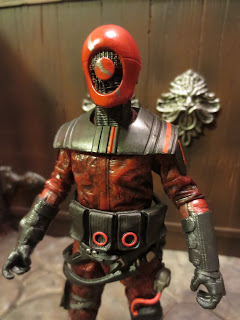 
* I really do love the look of this figure! The uniform of the Guavian Enforcer definitely brings to mind some of the various background characters which appeared in the Original Trilogy in places such as Mos Eisley or Jabba's Palace. It's basic and looks like there could be a simple humanoid underneath the outfit but the various bits of armor give the Guavian Enforcer a bit more of an intentional look. This guy is more soldier than space explorer. 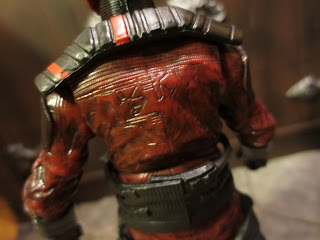 * There's plenty of minute details on this figure that are eye-catching once you notice them. Check out the actual jumpsuit of the figure and you'll notice an interesting pattern: It looks almost like circuitry or something. Is this some kind of special "smart" material or something? I find this really interesting! 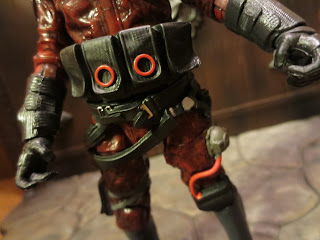 * The Guavian Enforcer has a tactical belt around his waist and mid-section. It's covered with various pouches and some sort of small gadget on his left side. There's also an interesting 2-piece device strapped to his left hip and knee that is attached by a red wire. I wonder what all this stuff does? 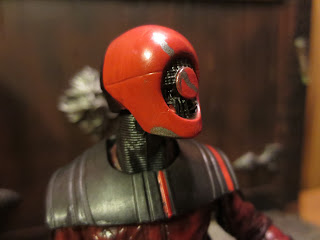 * The head is the most interesting part of the sculpt. Is this a helmet or a droid head? I think I'm leaning toward this being a form fitting helmet of some kind (kind of like Jason Todd's Red Hood helmet) but there definitely seems to be some interesting tech installed within. It's also a bit battle worn with some places where the red paint has been scraped off. 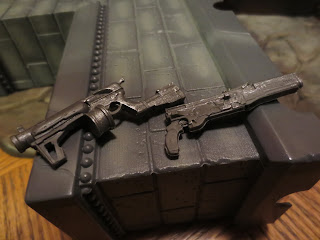 * I love the two blasters that the Guavian Enforcer comes with. While it's driving me crazy that I don't know the official names of these two weapons yet, I'm curious to see them in action. The long blaster pistol on the right appears to have two barrels (an over/under setup) while the weapon on the left appears to use a drum magazine of some sort. Both look awesome and fit well in the Guavian Enforcer's hands. 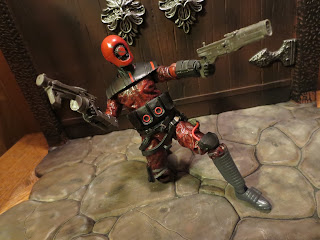 *I have two problems with this figure. First, the knee joints are made from a rubbery plastic that I thought Hasbro was moving away from. Second, while the Guavian Enforcer has the same articulation as nearly every other figure in this line, it's definitely a bit more limited in places. The elbows definitely don't allow for two handed poses with any of the included blasters nor does the mid-torso joint have much of a range of motion. 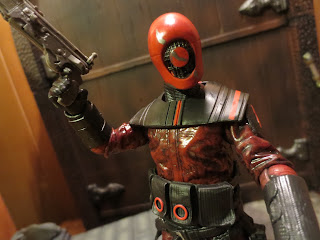 This guy is incredible! I really, really cannot wait to see these guys onscreen. If they're characters with a bit of screen time, I hope they're awesome. If they're background players, I can only imagine all of the cool stories that will be written about them in the future. If you're looking for a figure of a character that we have almost no idea about at this point in time, check out the Guavian Enforcer. He's a Great and a 1/2 figure and another reason why I'm so excited for the release of The Force Awakens!