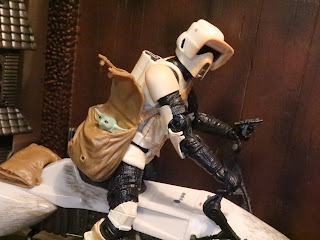 It's time for another Star Wars: The Black Series review! As I'm spending January wrapping up reviews of the stuff that showed up near the end of December today I'll be checking out a set inspired by The Mandalorian: Speeder Bike, Scout Trooper, & The Child. Based on Chapter 8 of Season 1, this set features one of the two Scout Troopers with his speeder bike and Grogu in a satchel. It was an Amazon exclusive and my preorder surprised me, landing on my doorstep on Christmas Eve! Hasbro really seemed to have been blinded by the popularity of The Mandalorian (though Lucasfilm may have kept too tight of a lid on things) and so we're just now getting a decent array of product from season 1. This set features a lot of reuse since it's largely a repaint of the Biker Scout and Speeder Bike that was released back in 2014 although there are some new pieces that help elevate this set a good bit. Considering this Scout Trooper helped kill Kuiil and punched Grogu/ Baby Yoday/ the Child, he might be the most hated Star Wars character of all time! Who wouldn't want to have a go at this guy, huh? Let's take a look at the Speeder Bike, Scout Trooper, & The Child after the break... 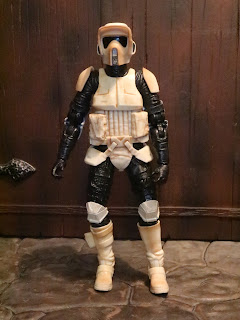 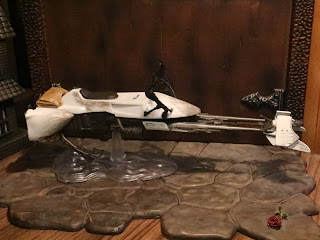 Includes: "Hover" base and foot pedals. 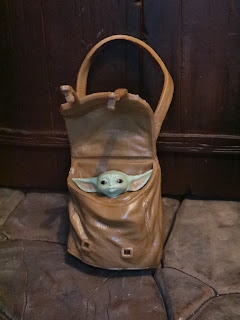 Height: The satchel is 1 3/8ths inches tall with the flap closed. 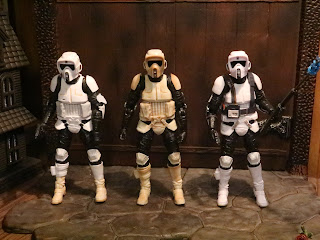 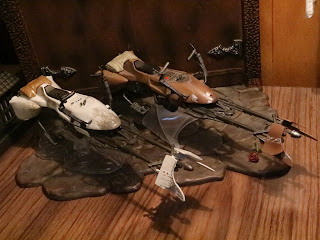 * The Speeder Bike from this set (left) is also just a repaint of the 2014 Speeder Bike (on the right) with the exception of a different stand. The new Speeder Bike's stand is actually reused from Enfys Nest's Speeder Bike. 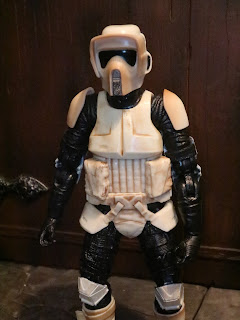 * This is the standard Scout Trooper and he's still a pretty solid sculpt. While some of the human figures in the Black Series haven't aged as well, the armored figures still look quite nice. The coolest part about this guy is that he's covered with dust and grime of Nevarro. It definitely helps him stand out from the previous Biker Scouts though he still looks OK as part of a group, too. 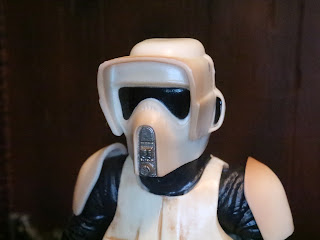 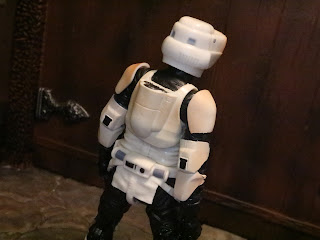 * The back of the Scout Trooper has lots of little gadgets and such. He's not as armored as most other troopers but he's still got some equipment it would see. 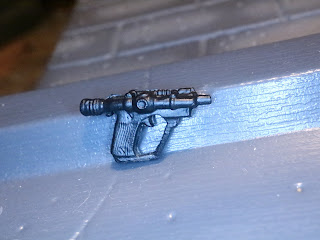 * The Scout Trooper also comes with his little EC-17 hold-out blaster. It's quite small but the figure holds it well as his hand is sculpted with a slit between his middle and ring fingers for the trigger guard. 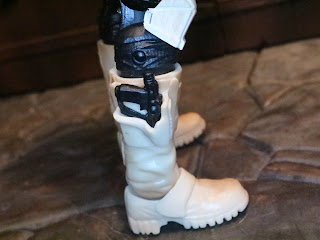 * When not using the EC-17 it stores easily in the holster in his boot. It stays in far better than you would think! 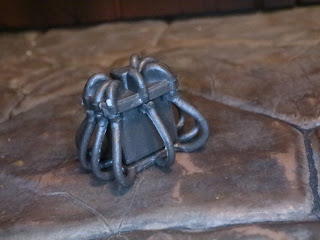 * One of the new pieces this set comes with is the piece of debris that the Scout Troopers shoot at but fail to hit in Chapter 8. It's just a simple piece but it's kind of a cool inclusion and it's pretty funny to have it placed near some Stormtroopers. They'll get the joke but they won't be happy about it. 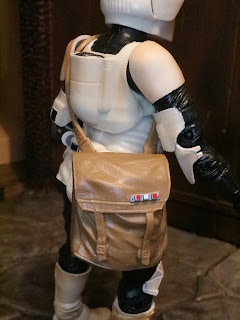 * Another new piece is the satchel which the child is kept inside. This is plastic piece with a softer plastic strap that allows it to be carries around the Scout Trooper's body. It's really quite nice looking wit lots of wrinkles and folds and some good detail. 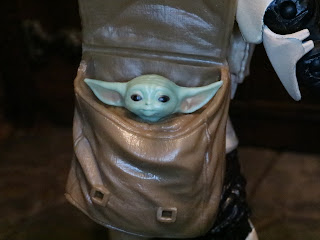 * The straps are also functional! Unhook them and you can see Grogu inside! He's so cute! He's really just an accessory, though his head is ball jointed, but since everyone loves Baby Yoda he still gets billing on the box. 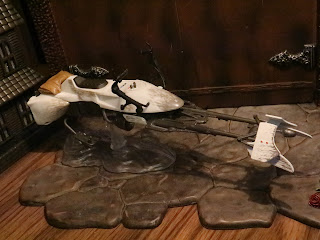 * The Speeder Bike originally came out in Phase 2, packaged with a regular Scout Trooper, and this is the exact same model. The paint scheme is different, though, as this one is more of an off-white/ light gray than the brown ones that zip around on Endor. 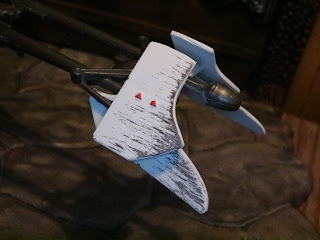 * There are a lot of nice paint details that show the wear and tear this speeder has sustained over the years. Most of them are on the body and they show where the paint has been peeled off or damaged. 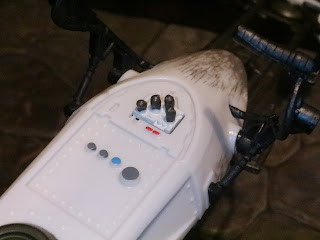 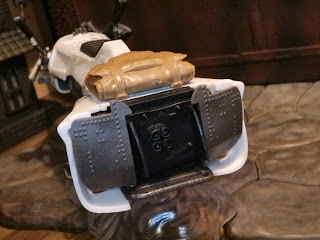 * The back of the Speeder Bike has the little flaps and one of the storage pouches strapped to the back. It's a solid piece but it looks pretty cool. 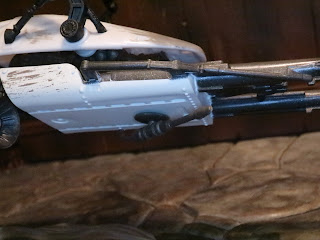 * Underneath the body is a blaster that can rotate. When I was younger I always thought the blaster was mounted on the steering vane at the front. I don't think I realized it wasn't until Kenner's POTF2 Speeder Bike. 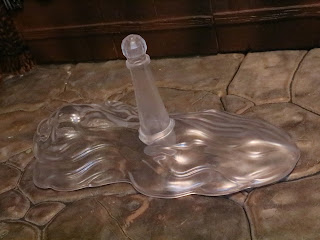 * The stand is reused from Enfy Nest's Swoop Bike. The stand included with the original Speeder Bike is more versatile but this one does look nicer on display thanks to the "motion blur" look of the base. 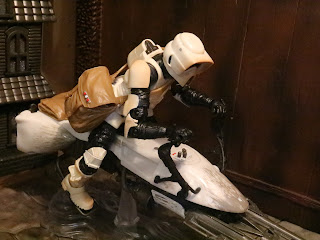 * The Scout Trooper was designed to ride this bike with ease and he looks fantastic holding those handles and zooming across Navarro! 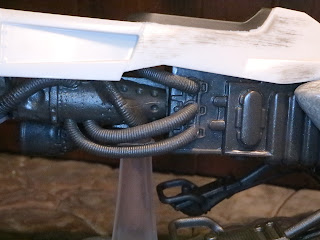 * The sculpt on all of the engine and technical components is great but there's no paint detail on them. The Phase II Speeder Bike had some great dry-brush effects and such on the mechanical components so this is a bit of a letdown. 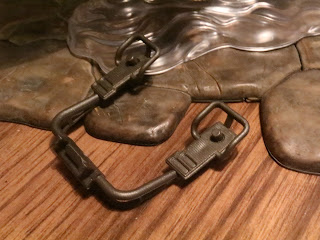 * The foot pedals tend to come off on this one when you're trying to put the Scout Trooper's feet on the pedals. It's not crazy but a little frustrating. 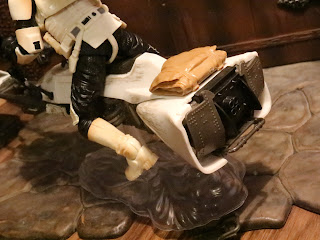 * Isn't it kind of weird that the handlebars and rear flaps on this Speeder Bike don't move? The vintage Kenner Speeder Bike had those features back in 1983 so it's odd Hasbro didn't add to the Black Series in 2014 when this was released. 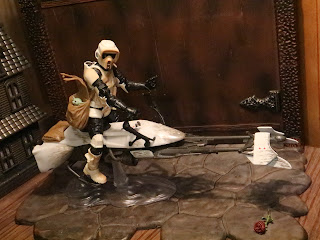 Overall, I really like this set. Is it a repaint for the most part? Yeah, but that's accurate to the source material and the new paint job looks quite nice on this. It's also quite cool that Hasbro threw in some new stuff like Grogu in the satchel and the piece of junk that the Scout Troopers keep missing during target practice. This one seems to have an exclusive tax tacked on as well but considering that you're getting a good figure, a small vehicle, and some cool accessories, it's not too bad. I'm giving the set a Great rating! It seems like this stock may have been under produced, too, as I haven't seen these back in stock and the prices are getting kind of high which is unfortunate.

If you dream of zipping around on a Speeder Bike of your own then check out the Hasbro Micro Machines Endor Forest Battle set and the Funko POP! Scout Trooper with Speeder Bike #234

For more of Grogu/ the Child/ Baby Yoda, check out the Black Series Phase III The Child and the Phase IV Din Djarin (The Mandalorian) & the Child.