This is the Way: Boba Fett (Carbonized) from Star Wars: The Black Series Phase III by Hasbro 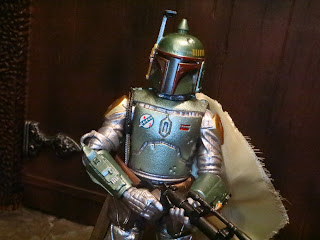 Last year on Triple Force Friday 2019 Hasbro debuted a number of "Carbonized" exclusive variant figures which largely became quite popular among collectors. I didn't pick any up as my Star Wars: The Black Series collection tends to mostly be "in universe" figures but when I stumbled upon the recently released Carbonized Boba Fett I couldn't resist. I'm typically always down for Boba Fett and he's a figure that looks pretty impressive with the Carbonized Graphite ink process Hasbro is advertising here. While there is a new Return of the Jedi styled Boba Fett coming out next year in the Black Series Phase IV collection this Boba Fett is 97% a repaint of the Boba Fett figure originally released in 2013 as both an SDCC exclusive and as part of the Black Series Phase I collection. This version of Fett is a Hasbro Fan Channel exclusive, meaning you'll find him available through e-tailers and stores like GameStop, which is where I picked him up. We'll check him out after the break but first I want to draw attention to the heading for this review series. Since the second season of The Mandalorian is in full swing I wanted to pay tribute to it so, for the duration of the season, all of my Star Wars reviews will have the "This is the Way" heading. I've done similar events for all of the Sequel Trilogy and spin-off films as well as for other movies such as Justice League. It's just a fun way to tie all of the reviews together to celebrate a big event. Anyways, on to Boba Fett (Carbonized)... 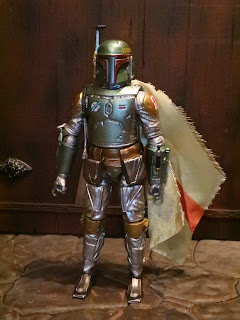 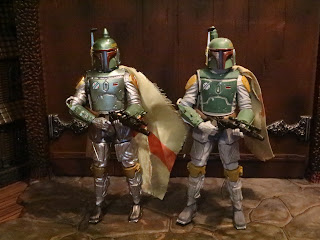 Comparison:
* The Carbonized Boba Fett is on the left while the standard Boba Fett from 2013 is on the right. Build-wise and accessory wise they are the exact same figure with different paint jobs. The only physically different pieces are the capes. The Carbonized Fett's cape is longer and made from a shinier, more satin like material than the rougher cape of the original figure. 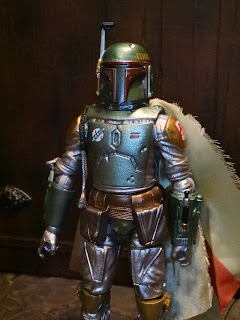 The Positives:
* Boba Fett looks really cool with the Carbonized paintjob. This has always been a strong sculpt and even though it's now seven years old it's still quite impressive. Hasbro has always done nice work on the armored and alien characters in this line. The Carbonized paint gives the impression of the figure being metallic as it has a shiny gloss to it. Like I said above, I typically want my Black Series figures to be all "in universe" characters but Boba Fett looks so nice that I made an exception. This is his costume from The Empire Strikes Back, by the way, so the upcoming Return of the Jedi Boba Fett is going to be giving us something new, which is fantastic. 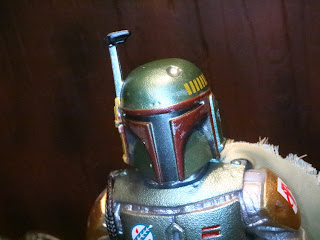 * The helmet is fantastic and the Carbonized paint really makes the green look fantastic. The range finder isn't functional (how cool was it to see Cobb Vanth use that in The Mandalorian?) but the proportions are excellent with a lot of detail in the sculpt. The various dents and paint scuffs add a lot of character. 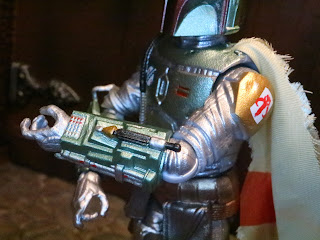 * Boba Fett has a lot of nice detail, particularly his weaponized gauntlets and the mythosaur logo on his shoulder. The paint details are super clean on these, too. 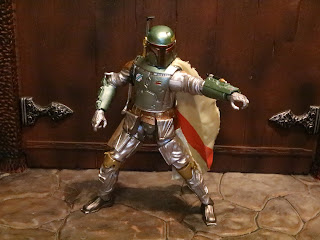 * While he's an older figure overall Boba Fett still has pretty decent articulation. The joints don't have the range of motion or the smoothness of newer figures but he's still a durable, fun figure and you should be able to get some great poses out of him. 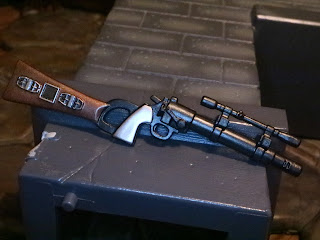 * Boba Fett's BlasTech EE-3 carbine rifle is the same as the rifle included with the earlier figures but the paint job is a bit sharper here, particularly on the stock. It's a nice looking blaster that really captures the prop used in ESB. 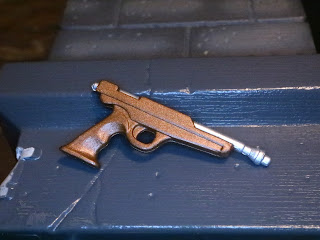 * Boba Fett's Sacros K-11 disintegrator also has a really nice finish to complement the paintjob. This is a sleek little pistol!
* Of course, Boba Fett also has a working holster for The Disintegrator on his right hip. 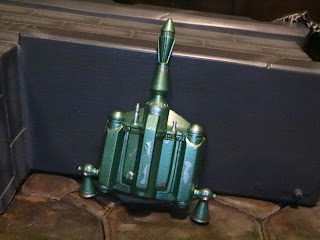 * Last up is Boba Fett's Z-6 jetpack. It's also much shinier, given the Carbonized paint scheme, but with fewer colors, which is true to the jetpack from ESB. It fits perfectly on Fett's back where it plugs in and has two little teeth to help keep it in place. 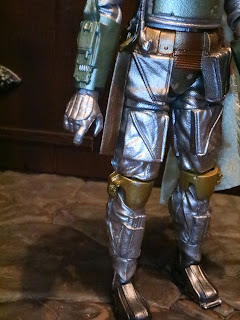 The Negatives:
* While the intention of the figure is to show off the Carbonized graphite paint, it is a bit disappointing that there are so many paint applications missing. The items sticking out of the leg pouches on Boba Fett's jumpsuit and his right gauntlet have fewer details than on the original figure. Especially given the premium pricing of this figure that seems like quite an oversight. 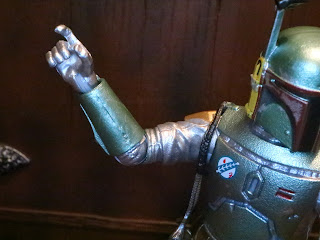 * I know the sculpt is 7 years old now but I'm still disappointed by the elbow articulation. It takes a lot of work to get Boba Fett to hold his rifle with both hands as he has limited elbow motion. 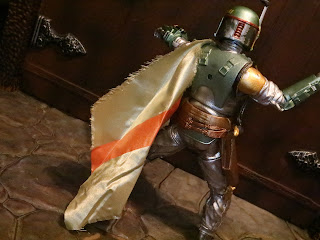 * It's interesting that Hasbro used a shinier material for Boba Fett's cape to match the carbonized paintwork and while I like the effort, the cape seems way too long. Like, "Boba Fett is in danger of tripping on it" long. That's kind of weird, right? 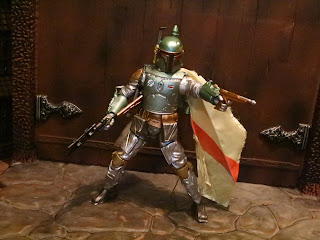 This is the first of the Carbonized figures I've picked up and while it looks quite cool, it's not a variant I'm really looking forward to more of. Boba Fett isn't a bad figure but considering he's now from the first year of the line some of the articulation is definitely outdated now. The overly long cape and the missing paint applications are also kind of weird. Add those in with the premium pricing and some of the luster is taken off of the figure. He's still a Good and a 1/2 figure but definitely not a highlight for the year or anything.