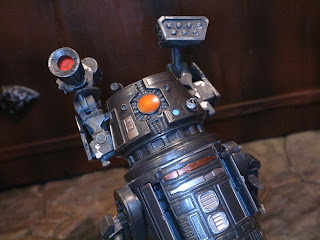 The newest series of Star Wars: The Black Series figures have started showing up and today I'm checking out the first figure from the series I managed to get my hands on: BT-1 (Beetee). A BT-1 assassin droid disguised as an astromech droid, BT-1 is half of the infamous and murderous droid duo alongside his killer counterpart 0-0-0. Originally appearing in the third issue of Marvel's Darth Vader comic series, BT-1 now appears fairly regularly in the pages of Marvel's Doctor Aphra comic. I was pretty excited last year when Hasbro announced Doctor Aphra, BT-1, and 0-0-0 as these are the first figures based on books or comics from the New Canon. Hasbro used to release a lot of Expanded Universe/ Legends stuff back in the day, and still does on occasion, so it's nice to see the New Canon supported as well. The various Marvel series have been very, very good with some strong character designs. I picked up BT-1 on my lunch break at a GameStop near my office and, apparently, they were only getting in 1 per store. Weird, huh? GameStop is getting these in separately rather than as cases. Let's check out BT-1 after the break... 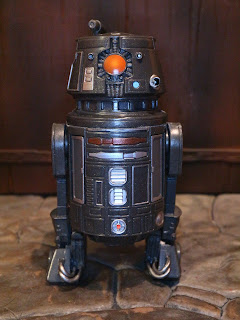 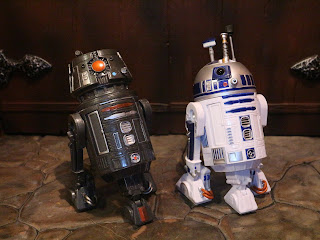 * When his weapons are hidden BT-1 looks like any other astromech from the dome down. That being said Hasbro simply reused the same sculpt they've been using since R2-D2 was released in the first series of Phase I figures back in 2013 (I bought that figure about a week or so after my daughter was born). For full details on the sculpt and such you may want to check back on that review or any of the other astromech sets that have been released. 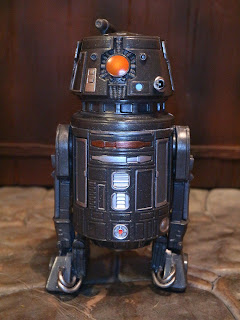 * I love the look of BT-1. You might think of other black astromech droids, such as R2-Q5, but he's actually a more grayish or gunmetal color. The paint applications are good and everything is very neat and clean. Of course, most of the appeal of BT-1 is when he has all of his weapon systems attached, but we'll get there in a moment. 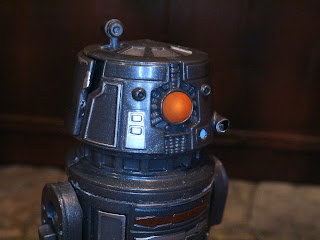 * The dome is completely new and unique to Beetee. I love the large orange "eye" as it manages to make him look so incredibly menacing. There are lots of cool little details on the dome including some sort of sensor-like device on top. There are two removable panels on the sides. When these come off, you can attach two of his various weapons to the dome. 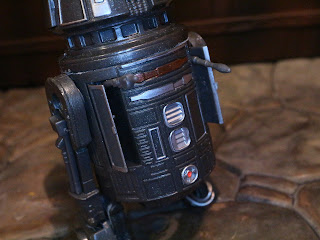 * Like every other R2 or R5 unit, BT-1 features two hinged panels on the front of the body that open up. Inside is a hinged claw arm on the left and a data port/ universal computer interface arm on the right. While they're part of the reused sculpt, these little features are still a lot of fun and give him even more crazy stuff popping out of his mechanical body. 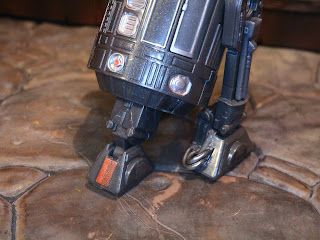 * BT-1 also features the same retractable third leg that the other astromechs have. It still works just fine although if they ever completely redo this sculpt I'd like for the leg just to slide in and out rather than to lower by swiveling the dome. 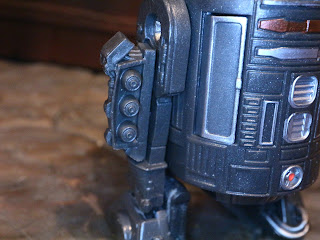 * When you remove the leg panels you can attach some of BT-1's armaments. First up, on his right leg, is what looks like a series of three concussion grenades. Presumably this is a grenade launcher of some sort? It plugs in easily and stays attached fairly well. 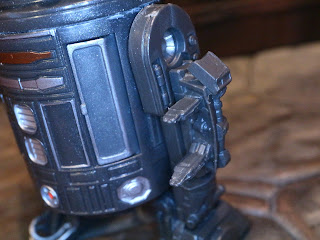 * On the left is what looks like some sort of electrical weapons, perhaps? Or maybe flamethrowers? Who knows? Just pretend it's something destructive and you'll be good. 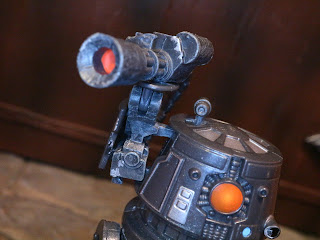 * On the top right of the dome is this very, very cool blaster cannon. Not only is it massive but it has a red paint application inside of the barrel and the made cannon itself can swivel while the base of the cannon has a hinge. There's also a belt of some sort of ammunition connected to the back of the cannon. Something else fun is that when you remove the panels from the side of BT-1's dome you can place them on the side of this weapon, as if the weapon simply popped out of his housing. 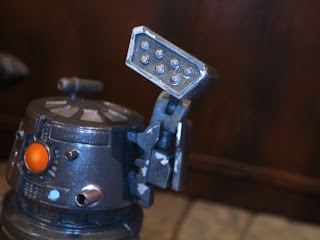 This looks like a missile launcher, perhaps filing a number of smaller missiles. It's also articulated (with a swivel/ hinge launcher and a hinged base) and it looks really cool. Remember how pissed everyone was back in the day because the POTF2 R5-D4 had a missile launcher and laser cannons on his legs? I wonder if BT-1 was inspired by that figure in any way? 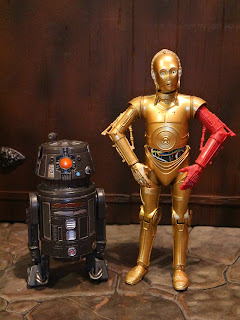 * The biggest problem with this figure is something that has plagued this figure since the first time it was used: It's too small! Astromechs are a bit larger than Hasbro has produced them in this line. At this point, barring an updated R2-D2, I'd kind of prefer they not change things up since they're all in scale. Still, it is a flaw worth pointing out. 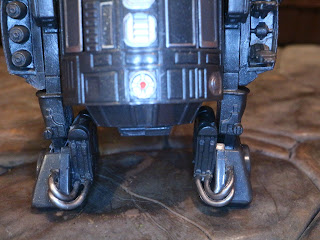 * This one might be hard to depict but BT-1 has legs that are fairly rubbery. This is unique to him over other astromechs and it's problematic because it: A. Makes his legs look a bit off and B. Makes his accessory snap in more loosely than on other droids. 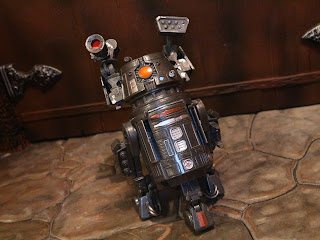 Despite the issues I mentioned above, BT-1 is a very exciting figure. He looks fantastic, has some fun accessories, and really gives us something that's pretty unique. It's cool to have the New Canon represented and I'm hoping we continue to see more of it in the Black Series. BT-1 is a Great and a 1/2 figure and while he might be a bit undersized, the amount of extras he comes with more than makes up for it. It was smart on Hasbro's part to ship him in the same series as Doctor Aphra and 0-0-0 as it automatically makes for a cool little display grouping on your shelf. Find him before he finds you!