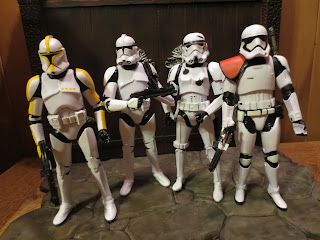 On Force Friday not only did we find a decent amount of new Star Wars product in stores (well, some folks did anyways) but we were also overwhelmed by preorders and announcements for a number of retailer exclusive figure, mostly for the Black Series. Today I'm looking at one of the most impressive of those retailer exclusive sets: The Amazon exclusive 4-pack of the Phase I Clone Trooper Commander, the Phase II Clone Trooper, the Imperial Stormtrooper, and the First Order Stormtrooper Officer. I have a weakness for the armored troopers in Star Wars: The Black Series and I've been picking all of them up over the past two years or so. We're building a nice little army of Clones and Stormtroopers at this point in time and this set adds in a new trooper type (the Phase II Clone Trooper), two new trooper rankings (the Clone Commander and the First Order Stormtrooper Officer), and a battle damaged paint variant of the general, garden variety Stormtrooper. I preordered this set back in early September and, while it was scheduled for December, it actually arrived really early in November. How often does that happen? Since this is a pretty large review and I've basically reviewed all four of these figures before, I've structured it a bit differently than my standard reviews. Click through for lots of pictures, lots of words, and lots of troopers! More after the break... 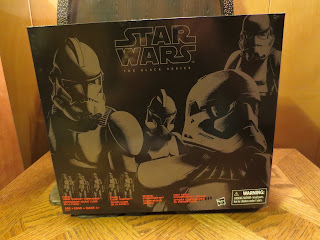 * I don't usually show off the packaging but since this is a pretty cool set I figures I'd show it off. The set arrives in a box that's about the same size as four of the standard Black Series boxes put together in a 2x2 formation. It has some nice art on the front showing off the four troopers packaged inside. The overall color scheme, while mostly black, does utilize the red color of the Phase III figures. Does the swapping of colors of the Black Series remind anyone else of the way the POTF figures morphed from Orange to Purple to Green cards? 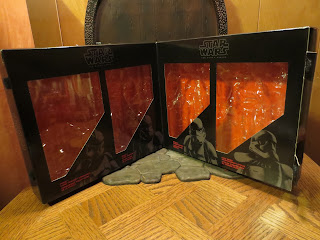 * The package has two Velcro flaps that swing open on the side to reveal all four troopers in separate windows. This is some very nice packaging and makes it much easier to store than a long box.  Probably easier to ship, too! For this review, rather than talk about the positives and the negatives in separate sections (as I usually do) I'm going to talk about each figure one at a time. I think that will cut down on confusion for me and you. 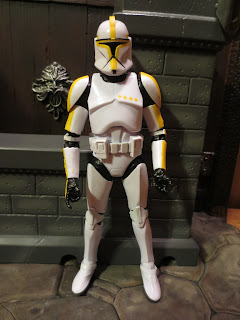 Non-Scalper Price for the Set: $80 dollars 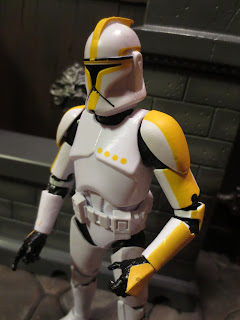 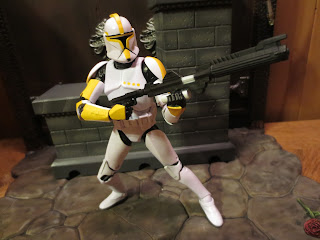 * I'm still not sure a better articulated, more solidly constructed figure has appeared in The Black Series than the Clone body. This is one of those action figures that you can sit around posing and reposing without any fear of breakage. These guys are truly some of the best toys out on the market right now, plain and simple. The articulation really lets you give this guy plenty of expression in his poses. The figures in this set also have much less rubbery knee and elbow joints than most of the regular releases. 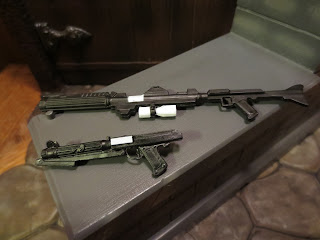 *Like all of the good clone troopers under his command, the Commander comes with DC-15A blaster (the longer rifle) and a DC-15S blaster (the shorter carbine). Not only do these feel like they're molded in a solid, sturdy plastic but they also have some paint apps on them. These look really nice and are excellent accessories to pose the Clone Commander with. 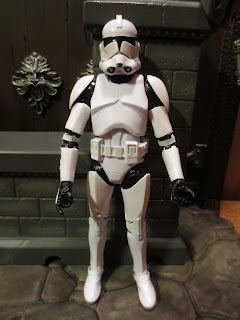 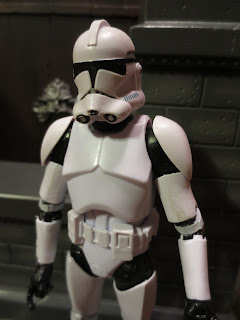 * While there might be some very, very minor production differences between the armor of the Phase 1 and Phase 2 base Clone Trooper armor, it doesn't seem to be anything that anyone gets hung up about. That's saying something for Star Wars costuming! The only real difference is the helmet and Hasbro did a nice job of capturing it here. This is the Clone Trooper helmet that appears in Revenge of the Sith and represents a transition from the standard Clone Trooper armor to the Stormtrooper armor. Now that we have this helmet (the only newly sculpted piece in the entire set) we are almost guaranteed plenty of new Clone Troopers! Since the armored troops are my favorite thing to collect in Star Wars Black, that's a good thing. 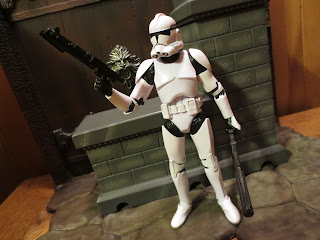 *This guy is articulated exactly the same as the Clone Trooper Commander above. He's durable, poseable, and tons of fun. The head has a bit less movement due to the wider bottom of the helmet, but that's not really anything that hinders the fun of this figure. 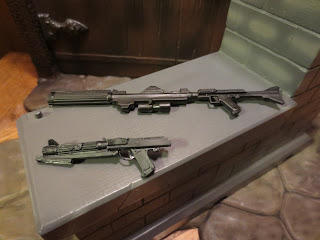 *The Phase II Clone Trooper comes with the same two weapons that all previous Clones have included (a DC-15A blaster and a DC-15S blaster) but they lack the additional paint applications that the weapons of the Commander, Sergeant and Captain include. This is disappointing as it seems like a downgrade, particularly when the Commander in this set features some paint apps on the weapons. 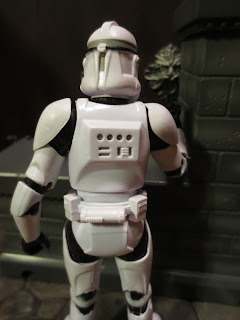 * Since this is the first time for the Phase II Clone Trooper head I wanted to show off the back of the helmet. Here it is! There are a number of paint applications on it the whole way around. 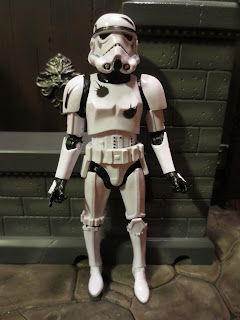 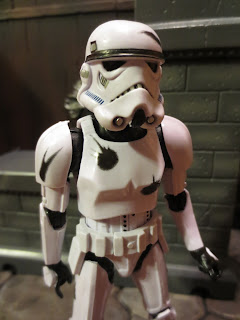 * This guy might be considered the dud of the set as he's no a new trooper type or variation but a battle damaged paint variant of an already figure, the basic Stormtrooper. The appearance of the figure has two things that set it apart from the first release. Firstly, it's a bit shinier than the earlier figure. I think it looks really good, so the shininess is a plus. Secondly, the immediately obvious difference is the blaster burns on the armor. The trooper has scorches on his right hip, right shoulder, helmet, and two on his chest. 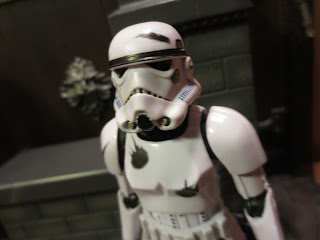 * Here's another angle on the battle damage. The scuffs and burns on the armor don't look too bad. I guess someone was using a pretty weak blaster against this guy, though, cause he has quite a few bits of scorched armor. I can't remember where I read it but someone commented that this is supposed to be the Stromtrooper who hit his head on the door frame in the Death Star! That's a pretty funny thought! 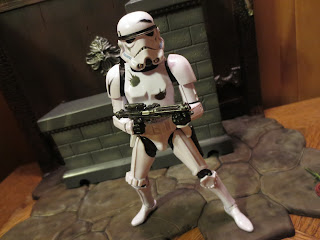 * I really liked the articulation on the basic Stormtrooper and I love this guy's even more because his joints are much more solid. Some of the figures in this line have suffered from rubbery joints on their double hinged knees and elbows, but not this guy! He's excellent! This guy is pure hand candy, plain and simple. 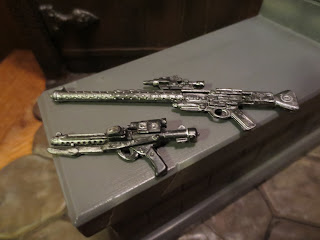 * Of course the Stromtrooper comes with the BlasTech E-11 blaster rifle, as that's the main gun you see these guys with. It's the same as the version that came with the Sandtrooper and the regular Stormtrooper and it fits nicely in the Stormtrooper's holster. The second weapon is the BlasTech DLT-20A, a longer rifle that I always associate with IG-88. I have yet to find evidence that it appeared in A New Hope or that a Stormtrooper ever carried it in the films. Still, it's a cool extra. I love the weathered look of these weapons as they have a great silver drybrush effect. 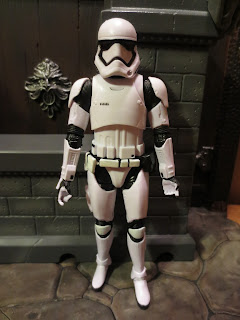 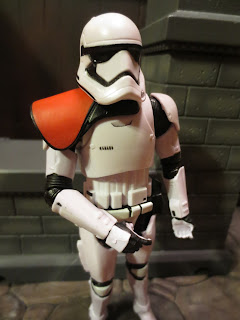 * This guy is really just the basic First Order Stromtrooper figure with an added pauldron (which first appeared on the Toys 'R Us exclusive First Order Snowtrooper Officer), so I'll steer you towards my review of that figure. This is a great sculpt although I did notice that he's noticeably shorter than the other troopers. Just a casual observation, though. The only problem I have with the sculpt is that with the pauldron on, the FO Stormtrooper looks a bit funny. It makes him look like he doesn't have a neck from certain angles. 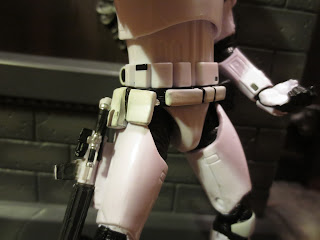 * Other than the lack of double hinged elbows, the only other negative I have with this figure is the pouches on the belt. The paint seem a bit off. I'm not sure if Hasbro is going for a different color here or not but whatever they did just doesn't look right. The pouches have a yellowish color to them which just looks off. 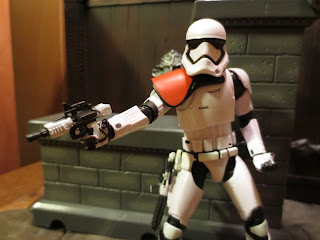 I'll just repeat what I said here in my First Order Stormtrooper review:

"Like most figures in the Black Series, the articulation is quite good. While he's missing the double hinged elbows of previous Stormtroopers, everything else is exceptional. There's a fantastic range of motion in the ankles, knees, mid torso join, and head. You'll have no trouble getting some fun, awesome looking poses." 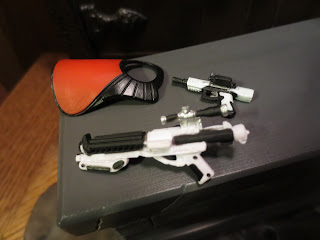 * The First Order Stromtrooper Officer comes with three accessories: The F-11D Blaster Rifle, a smaller blaster pistol, and a shoulder pauldron. These accessories have all been included with previous figures (the basic First Order Stromtrooper and the Firs Order Snowtrooper Officer) but they're completely appropriate here, too. The paint apps are still nice, either blaster can clip onto the right hip, and the head is actually easily removable here, meaning the pauldron comes off. 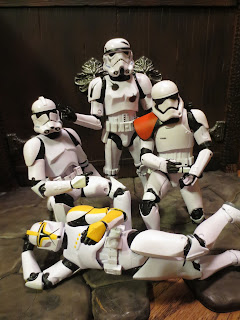 This set costs around $80 and, since it's sold by Amazon, you'll get free shipping. That's $20 bucks a figure which is the standard retail price on these figures. Considering these are exclusives, that's not a bad deal. Entertainment Earth has an exclusive 4 pack set coming out that's much less desirable than this one and costs $100 total. To me, this set is not only a decent buy but it's a fun set if you're enjoying collecting the troops in the Black Series. What's really cool here is that you get one troop from every currently known era of the Stormtrooper evolution. While there's hardly anything new here except for the Phase II Clone Trooper head and the paint work, this is still a well made set. Heck, the quality is even higher than on the single carded figures. I'm a big fan of this and feel pretty confident giving it a Great and a 1/2 rating. I wish something a little more interesting would have been included in place of the battle damaged Stormtrooper, but he's still a solid figure. Keep checking Amazon as this set has been going in and out of stock pretty frequently.


Do you love Stormtroopers and Clone Troopers? Well, I've reviewed quite a few on here from a number of different Star Wars lines:

And I've also reviewed plenty of them in the various phases of the Black Series: