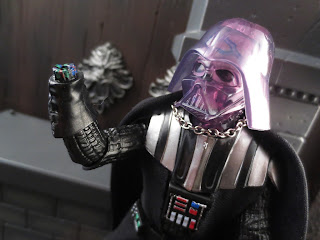 For a character that Hasbro has tended to release as often as they possibly can in other lines, it seems rather restrained that Darth Vader has only made two appearances in Star Wars: The Black Series so far. The original figure was released in 2014 and featured a removable helmet as it was based on Vader's appearance in Return of the Jedi. Today I'm looking at the second release of Vader in the Black Series, a Walgreens' exclusive which is again based on Vader's ROTJ costume: Emperor's Wrath Darth Vader. Trickling out near the end of 2015, this version of Vader is more than a repaint of the 2014 figure as it features a new removable right hand and a completely new headsculpt. Walgreens really has been doing a pretty good job with getting some cool exclusives lately (they're now one of my default places to hit up on toy runs) and Vader has hit in force in my area with each of my local stores getting about 8 figures each. That's not too bad. Since this figure is largely the same as a figure I've already reviewed in great detail I will be mostly focusing on the new elements. Feel free to check out that review to get the full picture. Ready to jump in for a look at this figure? Then join me after the break... 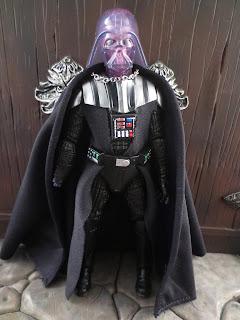 Height: 6 3/4 inches tall from his boots to the top of his dome. 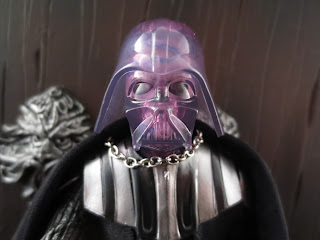 * The best, and most striking, thing about this figure is the new head. Not only is this a translucent purple Darth Vader helmet to represent him getting zapped by Emperor Palpatine's Force Lightning but it's also an entirely new and more accurate sculpt. If Hasbro ever chose to simply paint this headsculpt back (or if you did it yourself) this would be a great sculpt for a future Vader. 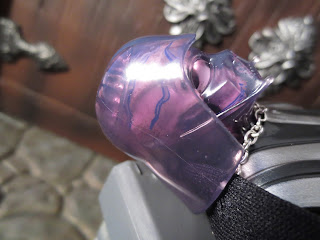 * Since the helmet is translucent you can see Anakin's skull underneath the helmet. This is extremely faithful to the film and looks pretty cool. It's tough to get a good shot of this but the paintwork underneath does a nice job of showing some Force lightning ripples along his skull. I'm really curious to see someone split this thing open and show off the interior skull sculpt. How weird will it be if Hasbro reuses this sculpt painted black as I mentioned above? We'll always know there's a little skull underneath Vader's helmet... 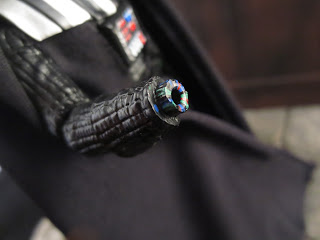 * To recreate Vader losing his right hand (again!), Vader's right hand easily slips out of the wrist socket. Not only is this a fun feature (which the original figure should really have had) but the forearm has some nicely painted little wires around it. This looks pretty cool. Mix this Vader body with the Anakin head from the first Vader and you have a really cool redeemed version of Anakin. 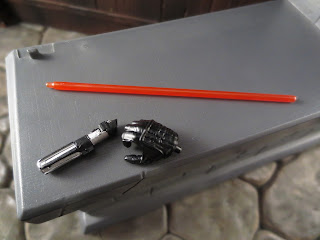 * Darth Vader comes with the same lightsaber that the 2014 figure included and it still features a removable blade. The other extra is Vader's mechanical right hand. It simply plugs into Vader's right forearm and fits snugly but is easily removable. 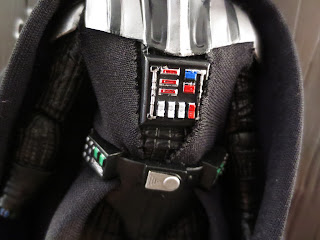 * I just wanted to mention that the paint work on this figure is incredible. It's even nicer and neater than the original figure. Hasbro is really doing a much better job with the paint applications on many of their figures (at least their 6 inch collectors lines) and the fact that a retail exclusive looks so good really shows the level of quality they've been achieving lately. 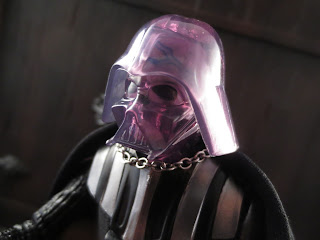 * Any negatives I have with this figure really have to do with some problems with the original figure, so check out that review.  For this figure exclusively, I do wish that Hasbro had included a cloud of Force lightning to fit over the torso or some strands of lightning that the Emperor could utilize as well. Otherwise, I think that this extremely scene specific variant is actually a better figure than the original Black Series Vader. 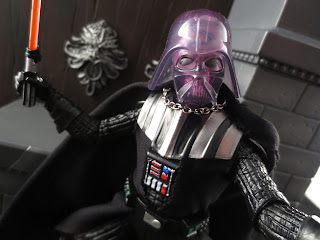 Initially I wasn't too interested in this variant but when I saw it in one of my local Walgreens stores, I decided to pick it up. It's actually a very nice store exclusive and surpasses the Phase II Vader in my eyes. Even though it's really scene specific, I love the better helmet and the very well executed right hand. While the original Vader only got a Good and a 1/2 from me, this guy gets a Great rating. It's tough to find true variants of Vader other than the minor armor differences between films but Hasbro's been using this one since the Power of the Jedi days and he does make a fun, novel exclusive.

Of course, I've reviewed a mess of other Star Wars: The Black Series figures, including: