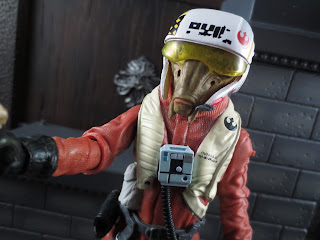 Today I'm reviewing one of the toughest figures to find in Star Wars: The Black Series Phase III. X-Wing Pilot Asty. Why Hasbro felt the need to call this guy "X-Wing Pilot Asty" is beyond me, particularly because this guy has a full name: Ello Asty. A member of the Abednedo species created for The Force Awakens, Asty's name, like those of each of his fellow Abednedos, pays homage to the Beastie Boys. Ello Asty sounds a lot like Hello Nasty, doesn't it? (There are other Abednedos in TFA, including one named Ilco Munica and a senator named Brasmon Kee.) Anyways, Mr. Asty here began popping up at the end of 2015 and has still proven to be pretty difficult to find. I finally found one online at a reasonable price (particularly since shipping was included) and added him to the collection. While Asty doesn't play a huge role in The Force Awakens, Hasbro did turn him into an incredible action figure. Ready for a look at this guy? Then join me after the break... 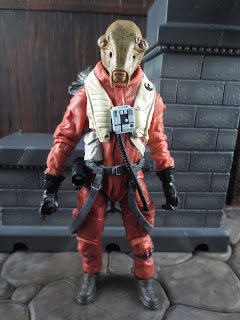 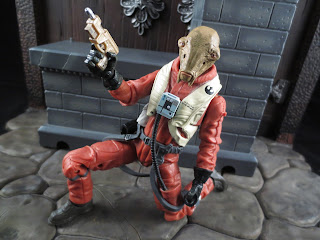 * Asty's articulation is very similar to Poe Dameron's, which was excellent, but Asty actually has a completely unique body sculpt from what I can tell. Even with all of the various straps and tubes attached to him you should have no problem putting Asty in lots of cool positions. He feels nice and sturdy, too, which is a positive trait that most figures in this line have. These are excellent toys. 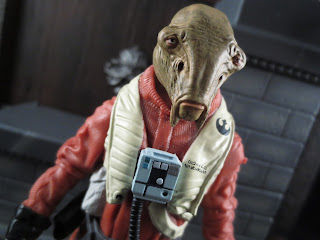 *The sculpt on Asty is incredible. The head sculpt is incredible and very perfectly captures the likeness of the character. The Abednedo have a really great design that feels very much like something we would have seen in the Original Trilogy (particularly ROTJ) and all of the details present really help to make this one of the most life-like Black Series figures. 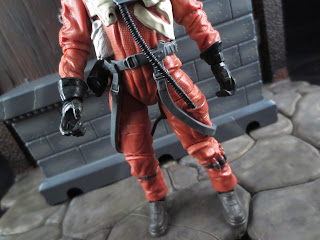 * I love the look of the Resistance pilots in The Force Awakens. The outfits are just really interesting because there's so much going on. The "Interstellar Orange" color to the flight suits looks incredible and the various doodads like life support unit and cord, the bandoliers of signal flares on the left shin, and the flight harnesses really make these figures feel very rugged and busy in a great way. They look like actual fighter pilots. 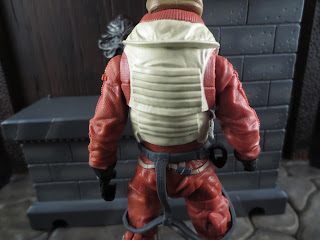 * While some of the Black Series figures have very flat, basic paint schemes, others receive some extremely detailed paint jobs which utilize techniques such as washes and dry brushing to give them a lived in look. Asty's outfit actually, particularly his off-white vest, actually looks like it's been through some stuff as it looks weathered and perhaps a bit dirty. 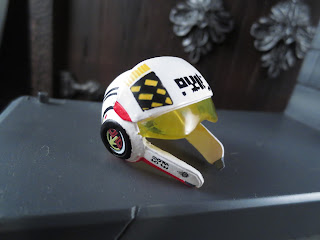 * Asty comes with a unique helmet to fit his uniquely shaped cranium. Not only is the paint work on this incredibly detailed and accurate but it has a cool little message spelled out in aurebesh on the right chin guard: It says "Born to Ill." Yup, another Beastie Boys reference. 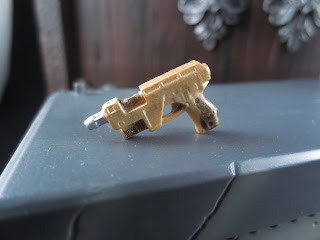 * The Glie-44 seems to be the default pistol for most of the Resistance, so it makes sense that Asty comes with one, too. It's a really nice looking piece. The paintwork on it really brings this pistol to life. In all honesty, it's probably one of the nicest looking blasters in the Black Series to date. 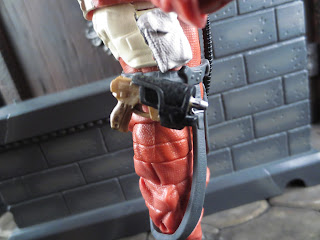 * Asty has a small holster for his blaster pistol, too. It's on his right hip and it's angled out a bit so that it's functional whether he's walking around or sitting in the pilot's seat. You know, in case he wants to pull of a drive by on some First Order punks. Straight out of Coruscant, haters!

Oh, and the pistol fits inside really securely, so no worries about it falling out. 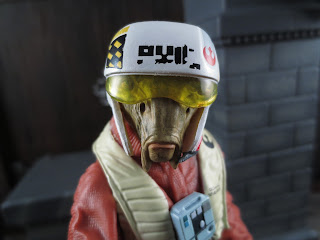 * The only technical negative I have with Asty is that there is a bit of paint bleed on between his flight vest and his flight suit.

*There's also the negative that Asty is a pretty minor character who bites the big Bantha burrito of death pretty shortly after being introduced. We have a TFA Ello Asty figure, but no Luke, Leia, or Maz Kanata. Makes sense... 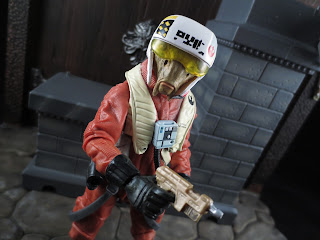 If you're looking for one of the best Black Series figures released in the The Force Awakens focused Phase III, look no further than Ello Asty. This guy is an incredible figure that shows what Hasbro is truly capable of when they give it their all. While he's a pretty minor character, that's never deterred Star Wars fans from wanting to add a particular character to their collection before. This guy gets an Epic rating from me! Maybe we'll someday get Snap Wexley, Jess Pava, and Nien Nub to complete the most recognizable Resistance pilots from the film.


If you're interested in Star Wars: The Black Series, check out all of the other figures I've reviewed in this series: