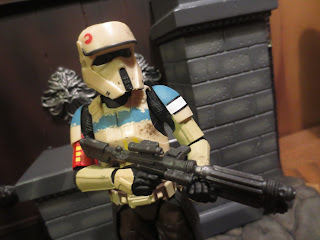 Holy smokes, was Rogue One incredible or what? I haven't reviewed anything since seeing it during the Thursday night early showing but, my gosh, I'm impressed. I really want to go see this one in theaters again and I've been spending the past week looking through the Visual Dictionary to look for all the cool stuff I want to keep an eye out for during the second showing. The battle on Scarif was absolutely fantastic and I imagine the Scarif Stormtroopers (officially called Shoretroopers) will quickly become a troop building favorite. While they didn't have a ton of screen time, they just looked absolutely incredible. I reviewed the standard Shoretrooper a couple of weeks ago, so here's a look at the Squad Leader. More Star Wars goodness after the break...

Warning!!! Minor spoilers after the break!!! 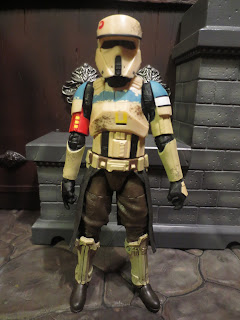 Non-Scalper Price: $17-$20 dollars (Wal-Mart has advertised some sales on these guys, as have a few other retailers) 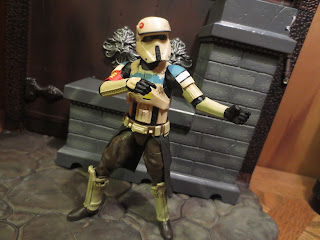 * Largely based on the body of the Hovertank Pilot, (and shared with the standard trooper) the Scarif Stormtrooper Squad Leader has the same excellent articulation that figure had. I absolutely love this guy, too, and I don't think a day has gone by since I received him in the mail that I didn't pick him up and spend a few minutes posing him. He just moves so well and looks incredible in firing positions. The kama doesn't hurt his articulation at all. 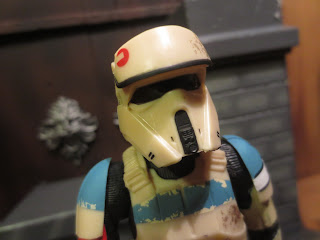 *  The helmets are really, really cool on the Scarif Stormtroopers. The heavily armored piece on the brow actually houses some cooling fans since the armor is designed for a tropical environment (plus it looks really cool). The paint is really cool, though, as there's actually a dirty wash on the helmet as well as a unique design on the top right. I wonder if that's supposed to be a representation of the Death Star? 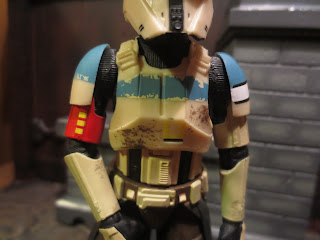 * Here's a look at the main torso. This is an incredible armor design with some killer paint apps. Hasbro doesn't always use subtle effects like these on their figures so it really stands out here. I'm also digging the red and yellow design on his right bicep as well as the blue stripe on the shoulder pads and across the chest. 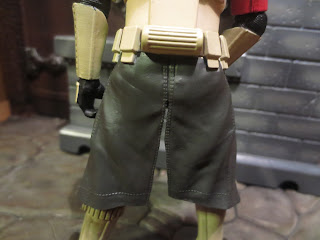 * Here's a closer look at the Squad Leader's kama. Along with the paintwork on his chest armor and his rifle, the kama is what really differentiates him from the standard trooper. The sculpt is actually impressive and, thanks to the cut in the plastic, it really doesn't hinder his articulation much at all. Not only does this just work well but it makes me all the more excited to get an ARC Trooper in the line at some point. 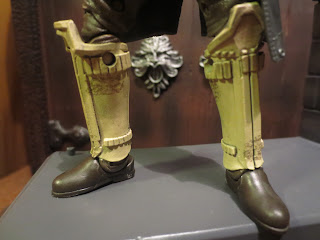 * The Scarif Stormtroopers are wearing some pretty slick boots. I love the details on them (the knee pads are also asymmetrical, just like a standard Stormtrooper's footwear) and the paint weathering continues down here. Hasbro really has done an amazing job with the paintwork here. It's a huge improvement over many other figures in the history of the line. 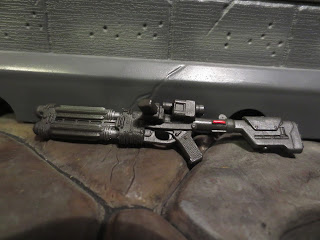 * Unlike the standard Scarif Stormtrooper, the Squad Leader comes with a unique weapon: The E-22 Blaster Rifle.  An upgrade from the standard E-11, the E-22 features reciprocating double barrels and a more solid stock. It also has a few paint apps including some silver dry brushing and a red tab or switch on the stock. This is just a cool weapon, quickly becoming one of my favorites. 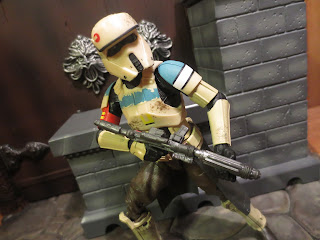 The Scarif Stormtrooper Squad Leader is another incredible figure in Hasbro's Star Wars: The Black Series line. I really like the design of this guy and, in a number of ways, I like this figure even better than the standard trooper. His blaster is really cool and his paint applications are a bit more varied. This guy is another Epic addition to the line. With this review, I think I've reviewed every Rogue One figure Hasbro has released in the Black Series line thus far except for the two newest, Chirrut Imwe and Baze Malbus. Let's hope that Hasbro soon announces a few Rogue One figures we desperately need such as Bodhi Rook, Mon Mothma, Saw Gererra, Galen Erso, Admiral Raddus, Jyn in the Ground Controller's disguise, and Grand Moff Tarkin.