This is the Way: Electrostaff Purge Trooper from Star Wars: The Black Series Phase III by Hasbro 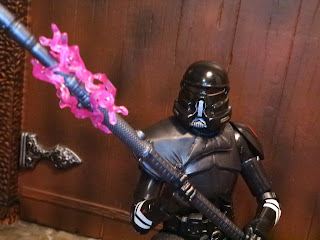 Hasbro has released a few troop builders from last year's Jedi: Fallen Order game in the GameStop exclusive Gaming Greats subset of the Black Series Phase III and today I'm taking a very brief look at another recent release: The Electrostaff Purge Trooper. Trained and equipped to hunt down any surviving Jedi, the Purge Troopers wear lightsaber resistant armor and carry weaponry designed for combat against a lightsaber. The Electrostaff Purge Troopers will absolutely test your melee combat skills in Jedi: Fallen Order as they strive to hunt down and destroy Cal Kestis. This figure is just a repaint of last year's Purge Stormtrooper (which was actually the Purge Trooper Commander) with a new weapon, so there's not a ton of new stuff to be said. Still, we'll give him a once over after the break... 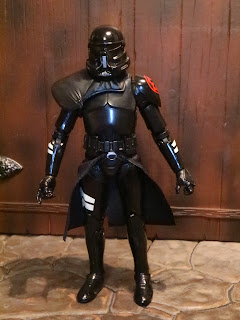 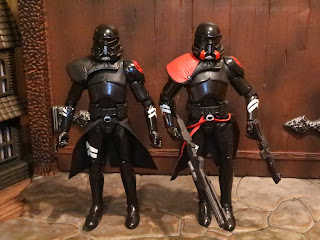 Comparison:
* On the left is the new Electrostaff Purge Trooper while last year's Purge Stormtrooper is on the right. Other than the colors of pauldrons and the lining of the kama, the two figures are exactly the same. 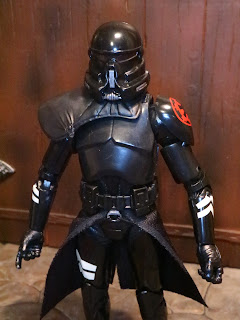 The Positives:
* Since this guy is largely the same as the previous figure he has most of the same positives as the previous release: Very cool, very intimidating black and red armor with a blood red Imperial cog on the shoulder, a black Clone Paratrooper helmet with a maroon visor, a soft goods kama, and the dated but still pretty acceptable articulation of the standard Clone Trooper figures. 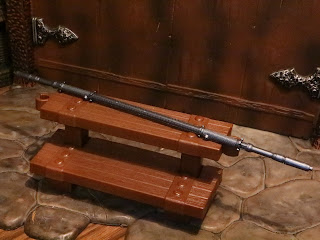 * His accessory is what differentiates him the most from the previous figure as he comes with a very long electrostaff. Is it too long? Maybe. It's pretty nice looking, though, with a lot of sculpted detail. This is a new accessory that we haven't seen with any other figures yet, so it's cool to see Hasbro giving something truly new to the Gaming Greats figures. 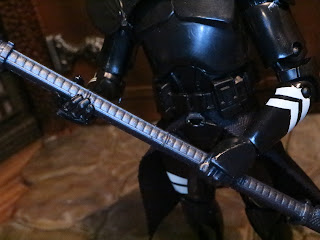 The Negatives:
* Here's where thing get less impressive. First, the electrostaff is definitely oversized. I'm not going to be a stickler for the length but the handle is so thick that this guy can barely get his hands on it to accurately wield it. It feels like it would be a better fit for one of the Hero Mashers figures. 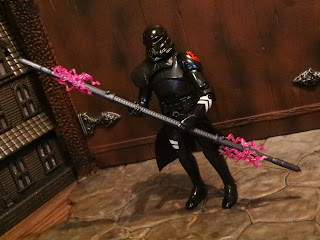 * The Electrostaff comes with two pinksh purple electricity effects that are meant to go on the ends of the weapon but they're so loose that they just kind of slip down the shaft, either landing on the figures wrists or falling the ground. Are these perhaps reused accessories from Marvel Legends? Does anyone recognize them?
* Since he reuses the body of the older Clone Trooper figures his articulation model is a bit outdated so some of his joints don't have the range of motion you'd expect, particularly the shoulders. The solid shoulder pads don't go up under the chest armor allowing for more motion like the newer figures. 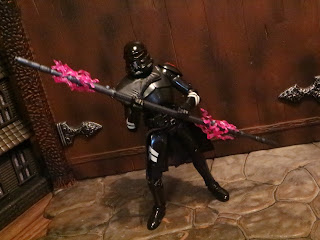 The Electrostaff Purge Trooper really isn't that impressive. He's a simple repaint whose biggest difference is his unique weapon but the electrostaff is pretty disappointing. The handle is oversized and can't be held very well nor do the energy effects on the ends stay put. Factor in the $5 exclusive tax (though I did get him when the Black Series figures were on sale) and there's not a lot to get excited about. The Gaming Greats Scout Trooper is a much better figure so if you're not dead set on picking up every Jedi: Fallen Order release then just go with that guy. This one's getting an Eh and a 1/2 from me.
If you're looking for more Purge Troopers then check out my review of the Black Series Purge Stormtrooper.
For more figures from Star Wars: The Black Series Phase III check out the following: