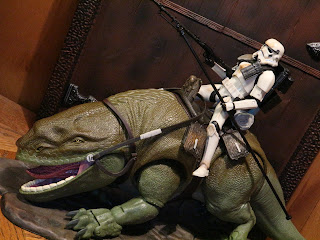 Sorry for the lack of reviews lately, folks! Due to some technical problems behind the scenes things have been a bit slow lately and I have a stack of toys piling up on my desk! Today I'm reviewing a really cool set that Hasbro released alongside the new Solo: A Star Wars Story product last month: The Dewback and Sandtrooper set! While it's not from the new film, I doubt you'll find many Star Wars collectors who will argue with the inclusion of a Dewback in the line. While the Dewback is completely new, the Sandtrooper is mostly just a repaint. Hasbro has released quite a few Sandtroopers in the Black Series thus far: The classic orange pauldron wearing Sandtrooper was released in the first series of Phase I figures back in 2013 while the enlisted Sandtrooper was released in Phase II and the Sandtrooper Sgt. was part of an Entertainment Earth exclusive Phase III 4-pack. Included with the Dewback is a mounted Sandtrooper, sometimes called the Desert Sands Detachment Sandtrooper) based on the Sandtrooper from the Power of the Force II Dewback and Sandtrooper set. He adds some value to the set, though, and its nice to have another Sandtrooper as they are just so darn cool. Ready for a closer look at these guys? Then join me after the break... 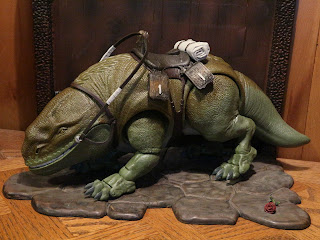 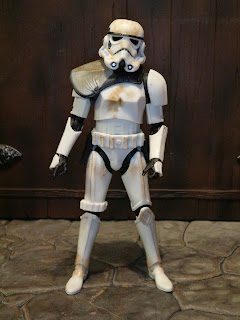 Non-Scalper Price for the Set: $60 dollars 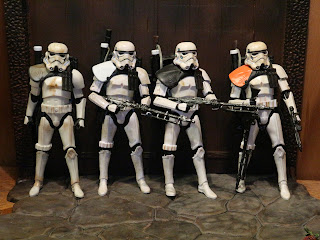 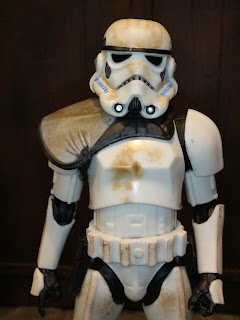 * The Sandtrooper looks great! This is still a killer sculpt and the weathering on the figure continues to elevate it above many other releases in the line. The grey pauldron sporting Sandtrooper is actually a Kenner/ Hasbro creation, based on the interpretation of this Sandtrooper's pauldron (it's actually white), but for those of us who grew up with that Sandtrooper and Dewback set from the Special Editions, this is a cool homage. Of course, the trooper has taken on the designation as being a "mounted" trooper, so it fills a cool spot in your 6 inch Imperial legions, doesn't it? 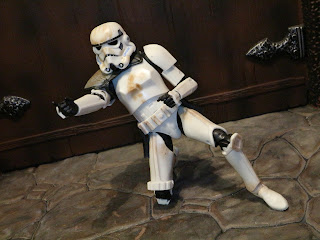 * This Sandtrooper keeps the awesome articulation on the Sandtrooper base body while avoiding the rubbery double hinged elbow and knee joints of some earlier releases. . This guy is solid, study, and tons of fun to play with. You'll have tons of fun putting this guy in cool poses while contemplating why Hasbro has removed the double hinged joints on most newer troops. 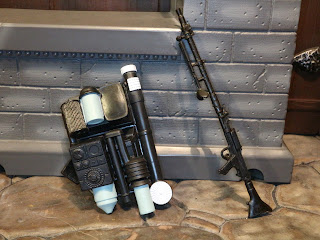 * This Sandtrooper comes with a few of the accessories that previous Sandtroopers included: The backpack, ammo pouch, and DLT-19 blaster rifle.  The accessories are sturdy, fit the figure well, and look pretty nice. 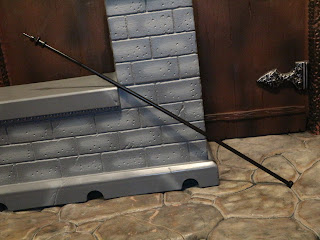 * The new accessory this troop comes with is the large lance used by the Dewback riders. It's a cool piece and something that I've always found to be quite memorable. Is it a prod of some kind? Helps the trooper retain balance? Is it for mounted combat? 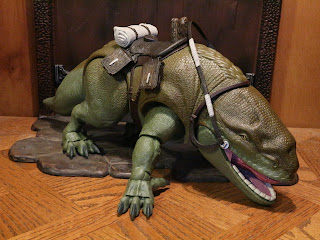 * Enough about the Sandtrooper, though: Let's talk about the Dewback! This guy is wicked cool and fully articulated! Seriously, his toes and legs are nicely articulated to improve his stance and he is loaded with joints to make him more playable! He's a cool looking figure that captures the perfect balance between the classic Dewback look and the look of the Dewback in the Special Edition of A New Hope. 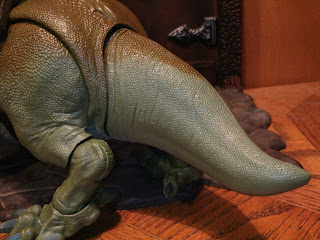 * The skin tone and texture on the Dewback is excellent. Hasbro releases some great product when they give it their all and it really feels like they have been bringing their A-game with the Black Series lately. 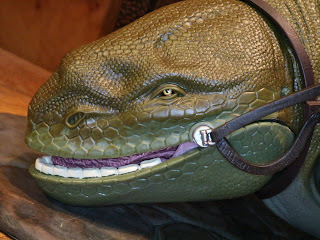 * This headsculpt is so amazing. I love it! The eyes, the scales, and even the teeth just make this seem like a living, breathing creature. 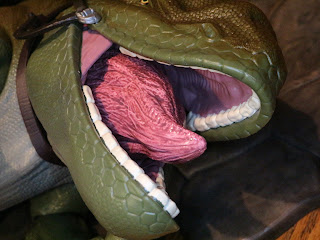 * The opening mouth is incredible. Not only does it allow you to give the Dewback an expression but the tongue is articulated, allowing for some fun. The inside of the Dewback's mouth is just really funny! There is so much detail here! 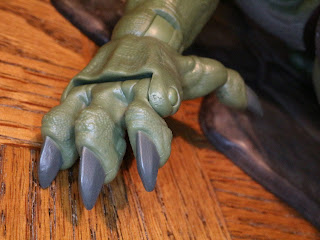 * I mentioned it earlier but I really like the articulated toes. They allow for great poses and help give the figure a sturdier stance on uneven ground. 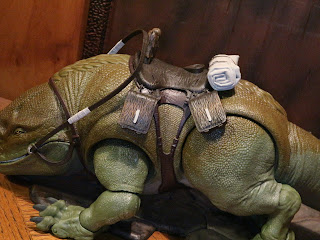 * Interestingly, the Dewback's saddle and reins are permanently attached. Personally, I like this choice (some folks won't) as it makes the figure easier to pose and play with. I really don't enjoy messing around with saddles and harnesses on toys, so this saves me a bunch of trouble. The actual saddle piece itself comes separate in the package and snaps into place. It feels like a once-time assembly, though, so be very careful if you try to remove it! 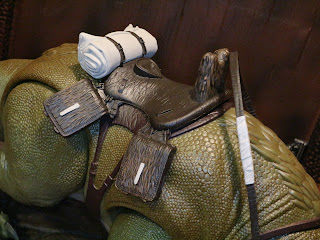 * The various saddlebags, the bedroll, and the reins look pretty nice. They have a leather-like paint job on them that makes them feel that much more authentic. Nerf leather? Maybe... 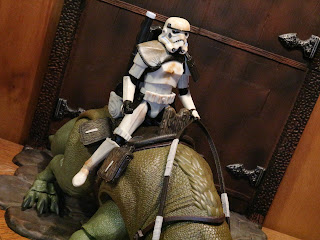 * The Sandtrooper very easily mounts the Sandtrooper thanks to the excellent articulation of the Black Series basic design. Gone are the days of Dewbacks with trap doors in their backs or Sandtroopers who walked like they had some severe chafing going on. 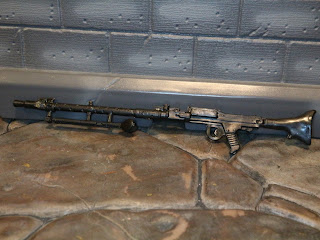 * The DLT-19 rifle doesn't have any paint applications. Typically these rifles have had some nice weathering, but this one looks kind of plain.

* We've now had four Sandtroopers released and we still don't have a RT-97C heavy blaster or the Mark IV Sentry Droid as accessories. What gives, Hasbro? 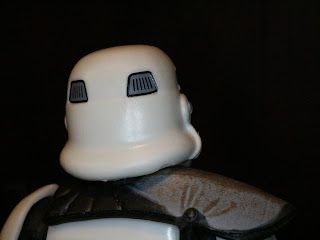 * Technically, the back of the Sandtrooper's helmet shouldn't have these vertical lines in them. It's a small nitpick, but it's one of the requirements for the 501st certification so I figure I'd mention it here. 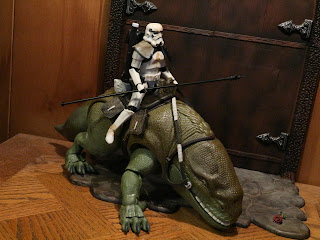 My critiques of this set are pretty minor overall and, for the price point, you're getting both a fairly solid Imperial troop and an incredible Dewback. This is both a very fun toy and a collectible that you could legitimately put on display in your home as a statue-like piece. It looks great and absolutely shows off the great stuff Hasbro can produce. It's a long ways off from the Dewbacks of our childhoods but it still manages to retain the fun and aura of mystery that these strange mounted beasts have always held. Confirmed Epic!