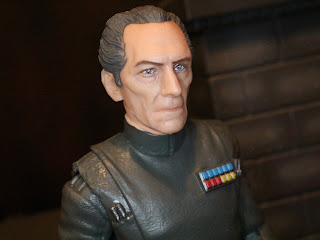 Whenever we get an Original Trilogy figure in the Black Series it just feels like a big deal. Grand Moff Tarkin's entry into the series feels like an even bigger deal. While Peter Cushing only starred in one film in the Original Trilogy (although he appears digitally in Rogue One!), his presence in A New Hope was so powerful that Wilhuff Tarkin has grown to become one of the most significant characters in the Star Wars galaxy. I remember when Tarkin was first introduced into Kenner's Power of the Force 2 line back in 1997. Having never been released in the vintage line, probably the most significant absence in that entire line, Tarkin's release then felt like a really big deal. I have to admit that I feel pretty excited about this release, too. Only a couple of figures in the Black Series thus far have taken advantage of what Hasbro calls face printing technology but now the technology is standard on all human figures and I can't say there is a character who takes better advantage of this new technology than Tarkin. If there is a human character in Star Wars whose face is his defining feature, it is Grand Moff Tarkin and his grim visage. Hasbro knocked this one out of the park so let's take a closer look at him after the break... 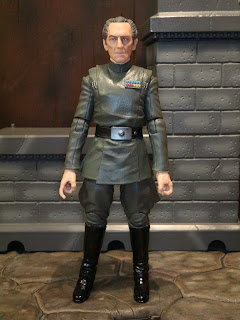 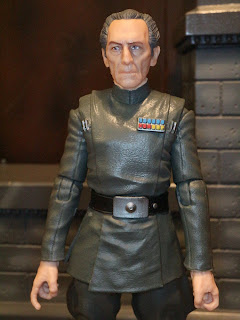 * Tarkin looks excellent in his slim and trim Imperial uniform. Tarkin designed this outfit when working with a tailor droid in James Luceno's book Tarkin and the idea is that it doesn't just fit him but "suits" him. Tarkin looks made for this outfit! One of the things about this figure that I believe Hasbro absolutely nailed is the color. Quick: What color is Tarkin's uniform? Did you say grey or green? Like Han's coat, The color of Tarkin's uniform is one of those things that varies in color depending on whether you're watching the film or looking at the original prop. Hasbro successfully blended the olive drab green of the actual costume with a grayish color of the film's appearance to craft a flawless looking uniform. 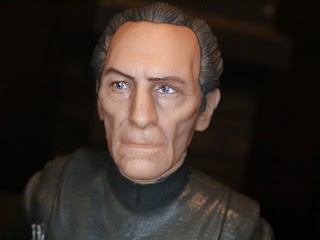 * The headsculpt and face printing technology is perfect. The eyes, facial features, and even the expression have an amazing, life-like quality that perfectly captures Cushing's gaunt features in the role. Incredible! 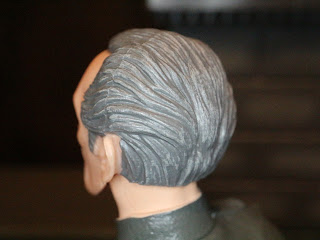 * Tarkin's hair is really nice as well. The mixture of paint colors and the excellent sculpting add another level of detail to the figure that we don't always see in sculpted hair. 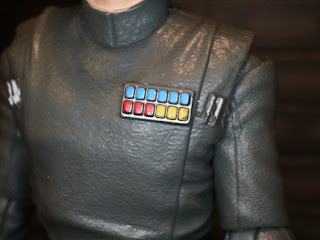 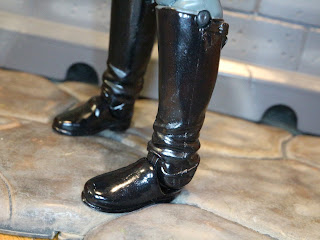 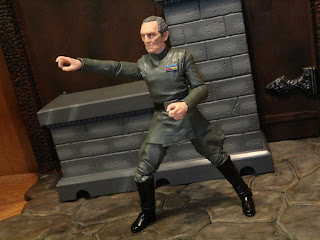 * While he's not typically a man of physical action (at least in A New Hope) Hasbro still gave Tarkin a full range of motion. If you want Tarkin to engage any rebels in hand to hand combat, go for it. The figure can handle it. Tarkin is also sporting a newly styled neck/head joint that features a barbell with balljoints at the neck and the head. 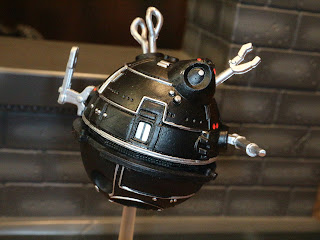 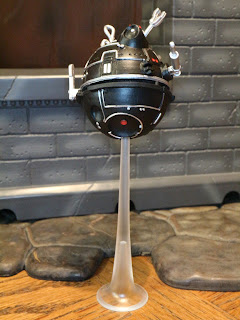 * Not only is the Interrogation Droid incredibly well crafted but it also comes with a translucent plastic stand that allows it to hover around. The stand attached to the bottom of the droid with a balljoint, so the droid can also be re-positioned when displaying it. 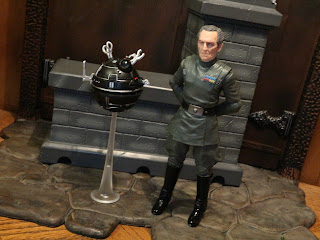 Tarkin is the first figure I've reviewed from the 2018 "not really a Force Friday" launch of the Solo products. He arrived in the mail Friday the 13th (the official street date) and while he isn't from the new film, he's going to be the figure to beat. Hasbro has really improved the Black Series line over the past year and 2018 seems to be offering up the best figures yet. Tarkin is an Epic figure with an incredible likeness, great detail, and a very cool droid companion. Expect him on my list of the best Black Series figures of 2018, no doubt.


If you're interested in another Grand Moff Wilhuff Tarkin review, check out the POP! Grand Moff Tarkin #159 from Funko.