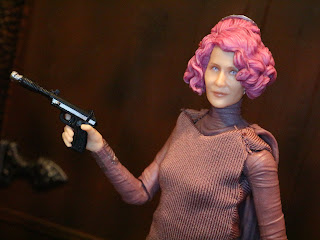 I'm really considering if I want to review this figure or now as Vice Admiral Amilyn Holdo is a bit of a lightning rod, isn't she? Hated by some, loved by others, Holdo is one of the most divisive characters from the most divisive Star Wars film ever. It took Hasbro over a year but they finally have delivered her in the Black Series line (though no Crait Luke Skywalker yet). Holdo is part of the most recent series of figures which includes an unusual mixture: A Battle Droid, Mace Windu, Padme Amidala, Han Solo as a Mudtrooper, and Vice Admiral Holdo. That's three Prequel figures, one Star Wars Story figure, one Sequel Trilogy figure, and no Original Trilogy figures. Holdo definitely stands out in any crowd so let's see how she turned out after the break... 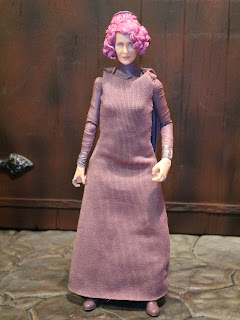 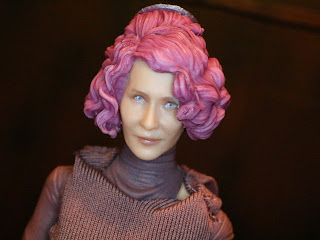 * Hasbro hasn't had any trouble with their likenesses lately and Amilyn Holdo is another success. She looks quite a lot like actress Laura Dern thanks to a solid sculpt and some excellent facial printing. The bright, colorful hair doesn't hurt, either. 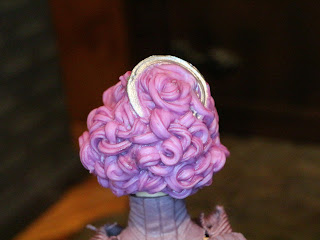 * The hair is good. Really, really good, actually. Check out the sculpting on it. The attention to detail is exceptional here as you can see each lock really well. 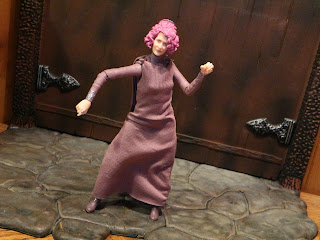 * While she has a soft goods robe all down her body the articulation isn't hindered much at all. Holdo is still solid, durable, and a well articulated figure that you can get plenty of poses out of. 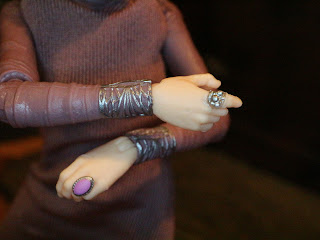 * Holdo's hands are adorned with decorative bracelets and some very swanky rings. Hasbro usually does a stellar job with details like this an Holdo is no exception. 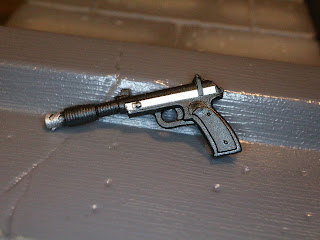 * When you need to stun your own mutinous crew make sure you reach for your Defender 5 sporting blaster. This is actually a really, really nice blaster design with some great paint applications to bring it to life. 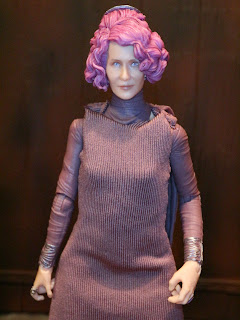 * Personally, I think Vice Admiral Holdo is a pretty nice dresser. She looks incredible in the film. That's not captured here too well, though. Compare this still from the film with the figure on the left. The Holdo on the left looks like she's wearing a purple potato sack while the real Holdo looks like she's ready for a showing of Squid Lake on Coruscant. I really wish Hasbro had gone with a sculpted figure, even if it meant some articulation cuts. Heck, she's even missing the cuts at the top of the dress due to the ill fitting fabric. 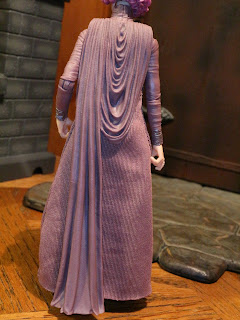 * The material just doesn't do the figure any favors. On the right you can see how good the sculpted parts of the dress look on the back. Unfortunately, oddly fitting fabric just doesn't mesh well with the sculpt. 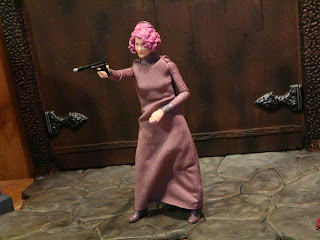 No matter how you feel about her (I like her although I think Admiral Ackbar should have been the one to take out Snoke's Star Destroyer),Vice Admiral Holdo should have been a stellar looking figure. She definitely has some nice qualities but the dress just doesn't do the figure any favors. Soft goods can work well but here they just don't have the ability to duplicate a uniquely designed outfit in this scale. She's a Good figure still, but not as nice as she could have been. I'm glad to have her but I wish Hasbro had just straight up sculpted the figure's dress.