Road to The Rise of Skywalker: Cara Dune from Star Wars: The Black Series Phase III by Hasbro 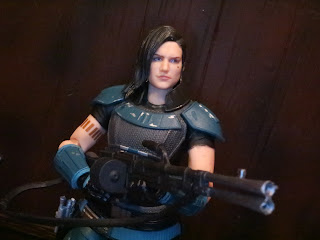 We've had two episodes of The Mandalorian so far and darn is it good. I'm loving it! Today I'm checking out Cara Dune, a new Black Series figure of a character from The Mandalorian who hasn't appeared in the show yet. Even waiting until after the second episode I still can't tell you anything about Cara Dune except that she's played by Gina Carano and she's a darn fine action figure. Seriously, she really is a highlight of the line with a great arsenal of weapons. Let's check out Cara Dune, a former Rebel trooper now turned mercenary, after the break... 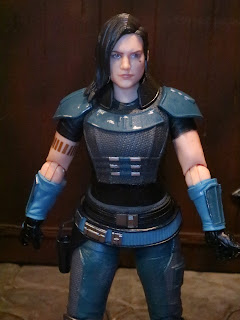 * Cara Dune has a look that definitely gives off a mercenary/ bounty hunter vibe. She's wearing various pieces of light armor with multiple textures and bits of damage. It's a great look. Her blue and black color scheme actually stands out a bit, too. Of all of the Black Series figures I own, only a few have a color scheme with blue being dominant, so that's another thing she's got going for her. 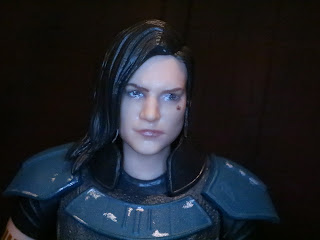 * At first I thought this was an incredible portrait. It still is, as it's very lifelike, but after comparing it to actress and former MMA fighter Gina Carano, it might be off just a bit. I think it's the expression, though. It's hard to compare with this expression chosen. The features look right, though, so we'll have to see how it looks once Cara Dune finally shows up in the Mandalorian. Probably A- to A work instead of an A+, which is still a positive in my book. 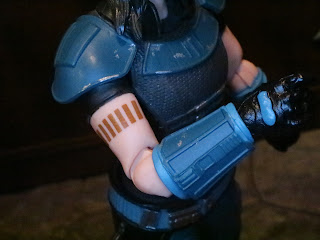 * Cara not only has a pretty cool tattoo on her right bicep but she also has really cool vambraces on her forearms. The wear and tear details are slick across the board. Seriously, there's a lot of great detail on the figure. 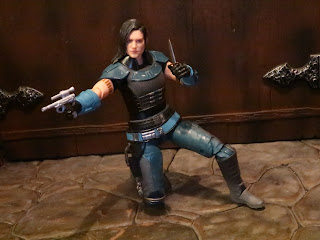 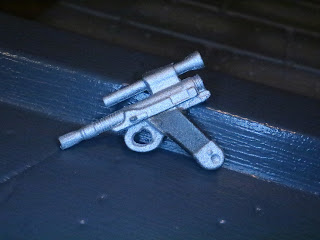 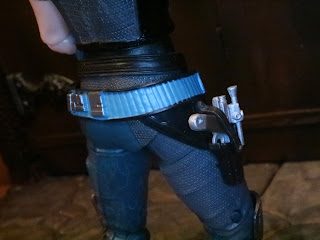 * Cara Dune has a cool belt with an attached holster. Her blaster slips right in and is held in place with a functioning strap. 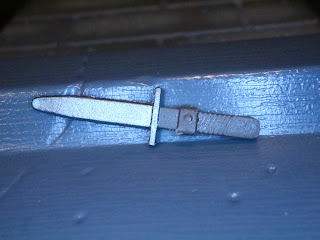 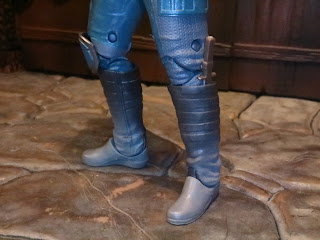 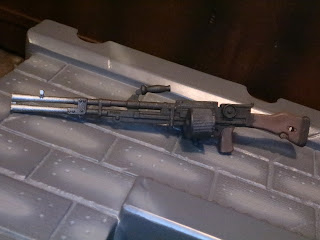 * Cara's last weapon is a pretty nasty looking heavy blaster. It reminds me of the RT-97C heavy blaster, but it's clearly a different model. The paint work is great on this and I love the drums on the bottom. It's a fantastic weapon that looks like it could cause some serious damage. 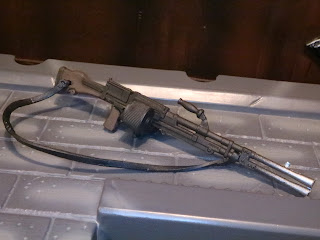 * Need for Cara to just tote this around? Then  use the sling! Yes, the rifle has a removable sling that is easy to put on and take off. It's a nice extra for sure. 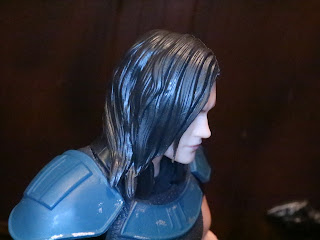 
* Cara's hair isn't poorly sculpted but it does look a bit flat. Sometimes sculpted hair looks crisp and detailed and sometimes it looks "melted." Here, it's starting to look a bit too "melted" for my taste. 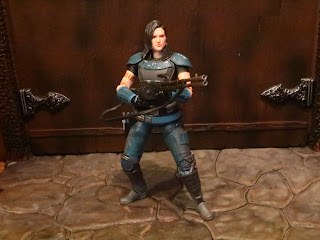 Cara is one of the figures from the second series that has hit since Triple Force Friday and she definitely is one of the most exciting yet. Incredible weapons (plus the ability to hold them), a solid likeness, great articulation, and a very detailed outfit make for another cool figure to add to the shelf. At this point Cara is the centerpiece of my The Mandalorian shelf as I haven't found the titular character yet. Cara Dune didn't pop up in episode 2 of the show, so hopefully we'll see her this Friday. I can't wait! She's an Epic figure and I'm excited to see this character in action on the show.