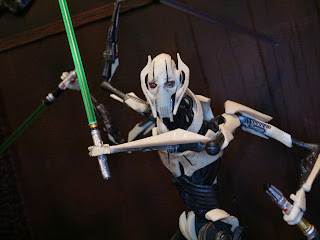 While Hasbro has offered some deluxe releases in the Black Series for some time, last year they started offering some oversized retailer exclusive figures as deluxe releases, such as the Target exclusive Gamorrean Guard and Moloch. General Grievous is the first mainstream release to be numbered in the deluxe series and he's been hitting lots of online retailers and even a few brick and mortar stores as well (I've seen reports of the figure at Best Buy and GameStop). Considering he's one of the main villains of the Prequel Trilogy and the Clone Wars, Grievous is another character whose absence from the line has been incredibly conspicuous. We've finally got him, though, and it's clear that Hasbro has put some real effort into this release. Let's check out the deluxe release of General Grievous after the break... 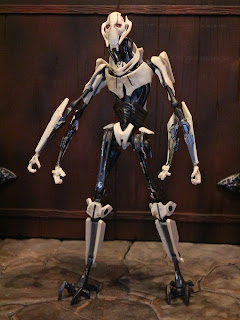 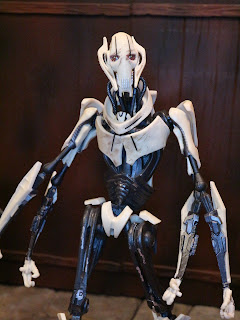 * Grievous looks incredible. While Hasbro certainly has lots of experience in crafting 1/18th scaled figures of General Gievous but this is their first go in the Black Series and I think they did a fantastic job. While he's (mostly) not an organic character, Grievous has a rather complex, intricate body design with his long, slender limbs and multiple plates of armor over his body. The sculpting and paintwork is pretty nice, too. I owned the Vintage Collection Grievous and this version takes the greatness of that figure and just makes it a bit larger! Large and in charge, baby. 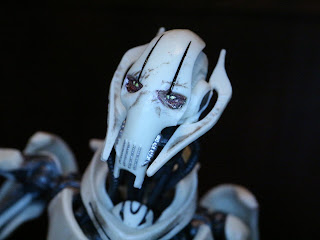 * The headsculpt is good. While the non-humanoid characters don't really utilize faceprinting in the same way as the humanoid figures, Grievious still looks to have the same level of care in his sculpt and paint applications. Those eyes are incredible! They look so realistic and piercing! 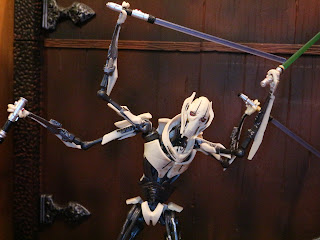 * Grievious' arms split in two, allowing for him to swing four lightsabers at once. Hasbro did a great job with the arms when they're split into two as each arm features multiple points of articulation and moves quite well. The articulation is tight and Grievous can wield all four of his lightsabers menacingly in any number of poses. 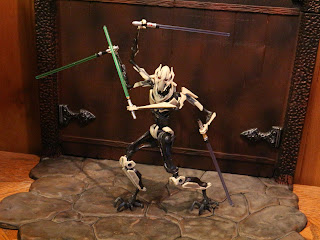 * General Grievous has great articulation over his full body, including true balljoints at his shoulders, hips, mid-torso, neck, and head. You can get him in so many poses! He can be a bit difficult to keep standing simply because of the spindly nature of his body but with a little work you'll be able to work him in any pose you'd like. 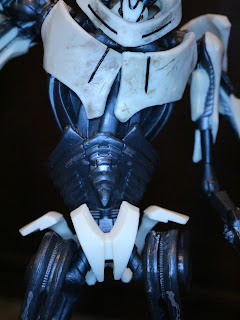 * There are lots of fine details on the body and lots of small paint hits to give the armored plates and the body some wear and tear. 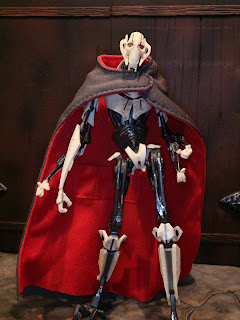 * General Grievous includes his cape, which I think looks pretty good. It's not perfect but there's nothing wrong with it and it seems to be of a very high quality. The colors are spot on and he looks so incredible wearing it! Now he needs some of his Magnaguards to chill with him! 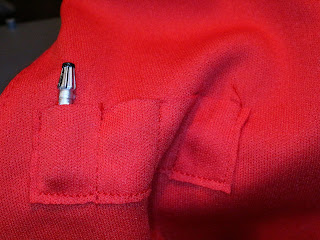 * Inside the cape are some very nice pockets (4 to be exact) where General Grievous can store his collection of captured Jedi lightsabers. They look really cool in here. 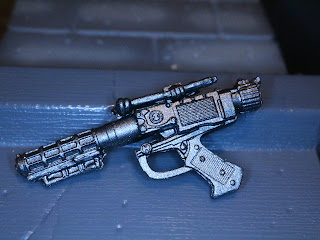 * Grevious includes his DT-57 "Annihilator" blaster pistol. Not only is this an incredibly cool sculpt but it also can be used by Obi-Wan to finish off General Grievious. 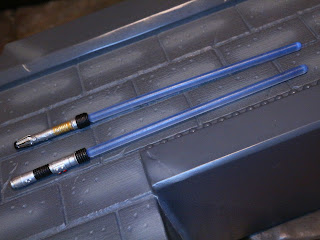 * Grievous includes four lightsabers, all having unique handles. Two are blue and they look nice. The handles fit very snugly in General Grievous's hands and feature excellent paintwork on the handles. 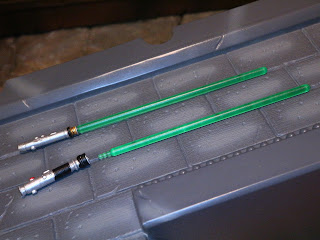 * And here are the two green lightsabers. Hasbro really improved the lightsaber blades here and they pop in and out much easier than on previous figures and feel much sturdier, too. 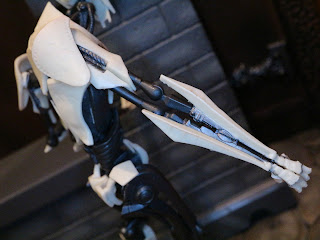 * Hasbro definitely put some thought into Grievious' arms as they do snap together and pull apart. Unfortunately, when they're together it is incredibly difficult to get the articulation to work properly and it is too easy to bend his limbs, putting some stress marks on the plastic. I definitely think Hasbro could have gone with interchangeable arms here as a better solution. 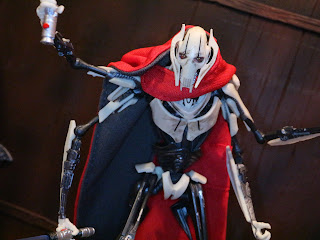 Despite my thoughts on how General Grievious could have been a bet better with interchangeable arms, he is still a top of the line figure. Getting him hand you can definitely tell that Hasbro put more time into the development and fabrication of the figure. Great accessories, excellent articulation, solid soft good, and some top drawer paintwork and sculpting make this another standout in the Black Series which, let's be honest, has definitely been full of standouts lately. Hasbro keeps doing better and better with this line and General Grievous has been done proud. Now...about Count Dooku....