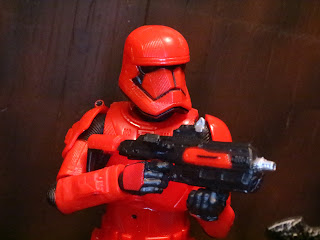 I'm still wrapping up the Star Wars: The Black Series releases I picked up in 2019 and I've only got five to go (six if I ever manage to find the Mandalorian). Let's check out the last figure from Hasbro's releases based on The Rise of Skywalker: The Sith Trooper! The Sith Troopers have an incredible appearance but, sadly, they didn't get much screen time in the film. The Sith Trooper was first releases last summer as a SDCC 2019 exclusive with five accessories. For the standard release three of those accessories have been cut (the larger repeating blaster, a claw of some sort, and a bladed weapon) but the two standard blasters are still here. As part of the Final Order, these troopers bring to mind the red bladed lightsabers of the Sith and the red robed Royal Guards of Emperor Palpatine. Let's check out these Sith Troopers after the break and see how they compare with the standard First Order troopers... 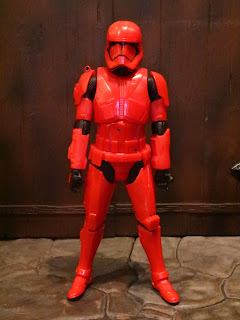 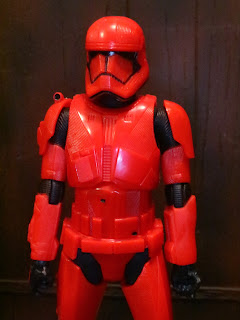 * The Sith Troopers aren't just First Order Stormtroopers painted red: They actually have a completely new sculpt that feature lots of new details all over the armor. The Sith Trooper armor is covered in anisotropic bands that apparently help to deflect the energy from blaster bolts. I really like the sensor mounted on the Sith Trooper's shoulder. It's just a cool little detail. 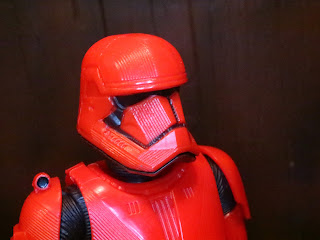 * The helmet is also really nice. I actually like these guys a lot more than the First Order Stormtroopers, which I've never been too fond off. I don't really care for the standard FO trooper helmets but these looks much, much better. 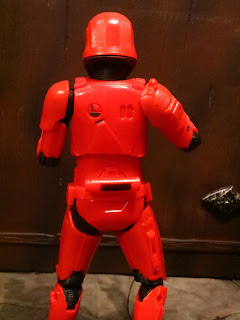 * The Sith troopers don't look too different from previous troopers from behind: They've got the standard details and explosive device on the back. The paintwork is really clean on this guy, though. While there isn't a ton of paint, what's here is very sharp and crisp. 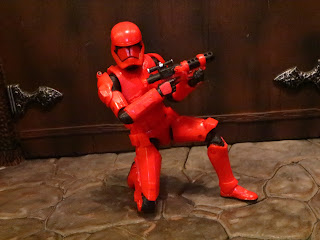 * The Sith Trooper is one of the most well articulated figures in the line. Seriously, his range of motion is excellent. He's also really durable. These are well built figures. 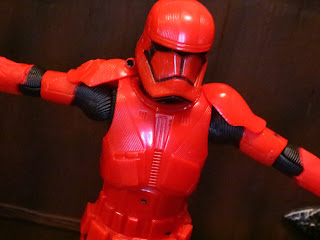 * The arm articulation is incredible. The Sith Trooper has the pectoral hinges that many figure are starting to use. Couple this with the fact that his shoulder pads are rubbery and flexible and you have an amazing range of motion here. 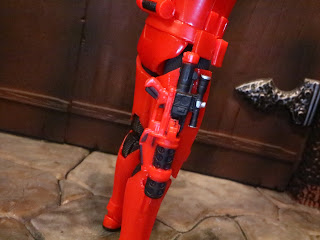 * Like the standard First Order Troopers, the Sith Trooper can store a blaster on his hip via a small slot that allows the weapons to plug into it. 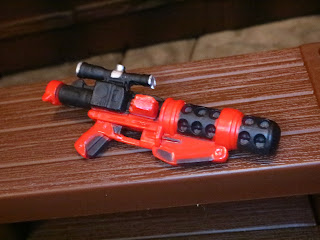 * The first blaster looks like a modified version of one of the First Order's F11s. It's got a great paint job. 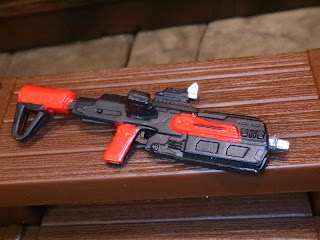 * The second blaster is my favorite: It's the new ST-W48 blaster. This version is currently in rifle mode (apparently, in universe the stock can come off) and it looks really, really cool. I love this blaster! 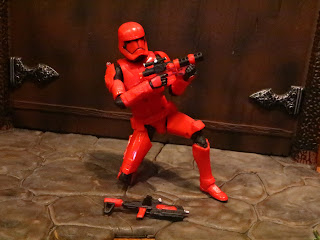 You may not be overly thrilled by the fact that the Sith Troopers didn't have a lot of screen time in The Rise of Skywalker, nor did they seem incredibly different from your garden variety First Order Stormtroopers but, as action figures, these are some of the best troopers released in the Black Series to date. Incredible accessories, a very slick paint job, great sculpting, and some of the best articulation on an armored figure to date definitely makes this guy a winner. This really is an Epic release by Hasbro. Seriously, they did some good work here. Pick this guy up if you've passed him by. He's a worthwhile action figure for sure.