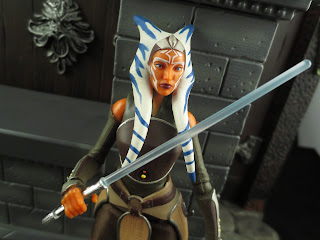 One of the things I absolutely love about Star Wars now is that it has so many different eras when the storyline takes place, each populated with a different cast (with some overlap of course! One of the areas and casts I'm currently finding the most interesting is that found in Rebels. While Ahsoka Tano was the star of Star Wars: Clone Wars, this figure is taken from her appearance in Rebels where she has returned to the fight older, wiser, and as the mysterious agent "Fulcrum" who assists the Lothal rebels. I just can't express enough how cool it is to have watched Ahsoka's story told over the six seasons of Clone Wars and now to watch it continue in another story that seems like it it could affect the events of the original film. Personally, I hope that Ahsoka appears in Rogue One (played by Ashley Eckstein, of course) and thus we get to see her storyline continue all the way to the events of the Original Trilogy. In this current series of The Black Series figures, Hasbro has released the first two figures from a Star Wars animated series. Uniquely, they've changed their appearance so that they still fit in with everyone else; almost as if they were film characters. It reminds me of how Hasbro integrated some of the earlier The Clone Wars figures into the main line back in the mid 2000 and later in the Vintage Collection. Ready for a closer look at the new Rebels era Ahsoka? Then join me after the break... 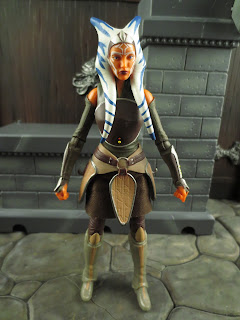 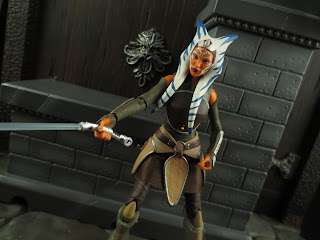 * Ahsoka is as nicely articulated as most other figures in the line. While her head doesn't move as much due to her montrals and lekku, her torso and arm articulation his incredible. She really can take on some excellent lightsaber dueling poses! She also feels quite sturdy, which is always a plus. 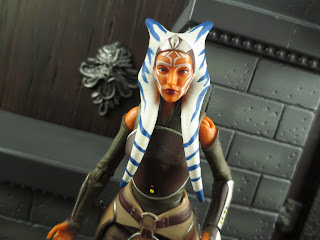 * Hasbro did an excellent job of Ahsoka. She's certainly one of the most visually interesting figures in the Black Series to date. Her outfit is rather complex and features a number of great design details and different paint applications. This is a fantastic Ahsoka outfit and I'm really glad that Hasbro went with this one. 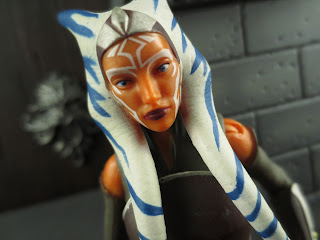 * The headsculpt is incredible. It's a great translation of Ahsoka's likeness into a more realistic form. If Ahsoka were to appear in a live action film such as Rogue One, this is probably what she would look like. The paint work is excellent and the detail on her montrals and lekku looks incredible. This is just such a gorgeous figure and is definitely on the higher end of everything Hasbro has released in the Star Wars universe. 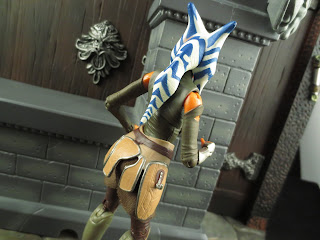 *  Here's a shot of Ahsoka from the back so you can see her rear Lekku and the back of her outfit. Again, the Lekku look fantastic and have excellent paintwork. 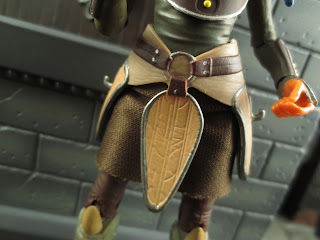 * While there are some problems with Ahsoka's hip movement (which I'll get to in a minute) I do really like how Hasbro handled her waist guards. They're made from a softer, more pliable plastic with some actual fabric in the middle. Not only does it look good but it gives her a bit more functionality than she would have had with just plastic alone. 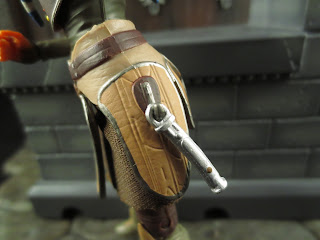 * On both sides of her thigh padding Ahsoka has two small hooks that can easily hold her lightsabers via the hooks on their hilts. These fit really well and look awesome when being toted around. 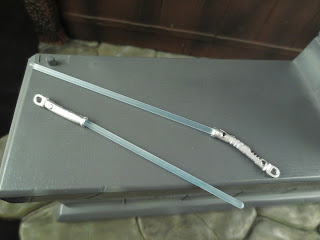 * Ahsoka comes with two lightsabers, both of which feature detachable blades. One saber features a curved hilt and a standard sized blade while the other is a shoto lightsaber, a shorter blade used in dueling with two lightsabers. While the blades look bluish in the pictures, they actually are quite translucent (the blue appearance seems to be coming from the grey background they're positioned on). Ahsoka's hands feature tight grips to hold both blades very firmly. 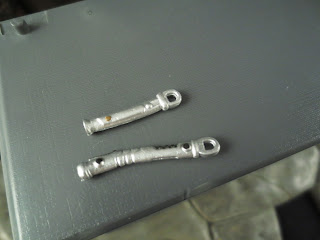 * Both of Ahsoka's lightsaber hilts are rather soft. Perhaps this was done to prevent them from being overly brittle? It's not too frustrating to insert and remove the lightsaber blades from the hilts but I really wish Hasbro just included one set of hilts and one set of ignited hilts with blades permanently attached. I'm not a big fan of the removable blades, myself. 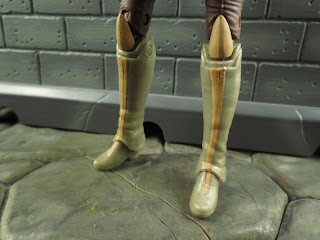 * When it comes to the figure itself, I only have one complaints: It is very difficult to get Ahsoka posed in a wider stance. I think that has to do with her waist piece, but it does make it difficult to find a cool standing pose for her that's more dynamic than just standing around. 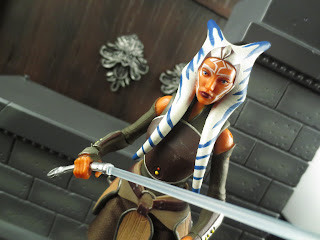 Ahsoka Tano is a pretty incredible figure. In all honesty, seeing her and Kana Jarrus from this series (who I'll be reviewing soon) actually makes the Rebel crew the "faction" from Star Wars that I'm the most excited about seeing complete. Not only do I just love this cast but I'm loving how Hasbro has recreated them so far. Though  I believe Ahsoka is a significant enough character in Star Wars lore to warrant multiple versions (her original and season 3 Clone Wars outfits would make great figures), it's a relief to know that Hasbro at least feels like she warranted one figure and that they did an incredible job with her. She's a Great and a 1/2 figure and is well worth picking up as quickly as possible. I fear that she's going to be a tough figure to find and is going to be almost invisible on store shelves.

I haven't reviewed any other figures of Ahsoka Tano yet but I have reviewed plenty more figures from the Black Series: