Road to Rogue One: Darth Revan from Star Wars: The Black Series Phase III by Hasbro 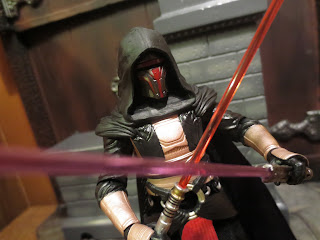 The most recent series of figures from Hasbro's Star Wars: The Black Series has been incredibly diverse in representing a decent number of different Star Wars properties; there are four figures from the films, a television series (Sabine Wren from Rebels), and a figure from a video game. The character from a video game is the subject of today's review, and it's Darth Revan from the Knights of the Old Republic series. While he's no longer canon (as of right now, anyways), Darth Revan did win a fan's choice poll sometime last year and thus gets a place in the line. Let's take a closer look at another Sith Lord, shall we? 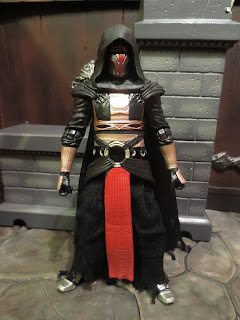 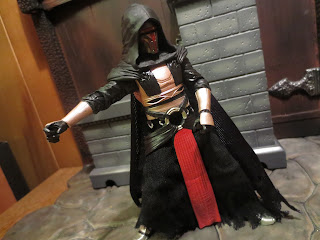 * Overall, Darth Revan has some really nice articulation. Even with his waist robes his leg motion isn't hindered in the slightest. All of the joints below the neck work perfectly and allow you to out this guy in some pretty wicked cool poses. He also feels very solid and sturdy, which seems to be par for the course with this line. 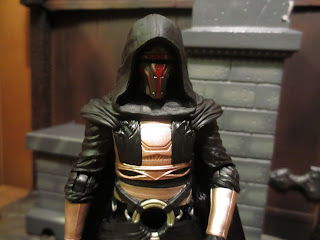 * Revan's sculpt is quite impressive. The paintwork is sharp and there is quite a bit of interesting detail on this guy. It's actually kind of tough to see his helmet due to the shadows cast by his hood, so grab your casual Star Wars fan friends and tell them this is Kylo Ren from the new Star Wars movie that's coming out. See if they'll buy it! 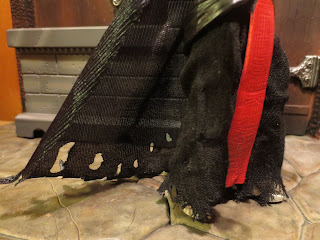 * While some pieces don't always look good in the 1/12th scale as fabric articles of clothing, capes and skirts typically do. Darth Revan's cape and robe not only look really cool, giving the figure a more dynamic appearance, but the have some tremendous wear and tear effects, too. The cape has various holes on the bottom while the lower hem of the robe is frayed. 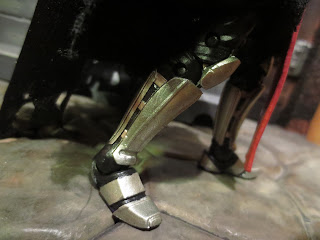 * Darth Revan has some really cool boots on underneath his robes. I'm a sucker for cool boots. Honestly, I'm just glad he's not naked under his robes like the Emperor.

Actually, that may not be true. There totally is a 1/18th scale Emperor figure that's pretty naked under his robes, though. I can't remember which one it is. Maybe the Clone Emperor. Still, hilarious but disturbing. 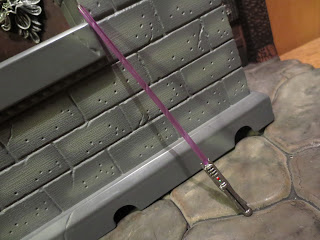 * While Revan used a few different lightsabers, his figure only includes two of them. The first is his purple lightsaber which he used upon first assuming the name Revan. This is not only a cool looking blade but the hilt is incredible. It's very unique and has some excellent paint work. 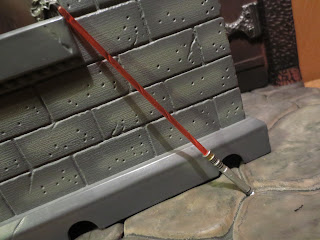 * Revan also comes with his obligatory red lightsaber. It also has a removable blade and a unique handle. I like the purple one better, but this one is still pretty cool. 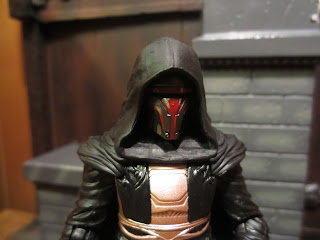 * My only complaint with this figure is the way Hasbro handled the headsculpt. I do think that, most of the time, sculpted hoods look better than fabric hoods in this scale. I do wish that the hood were either attached to the headsculpt or a separate piece, though, as there really is no way to get Revan to move his head. The hood holds the head quite firmly in place and the hood is permanently attached to the upper torso. 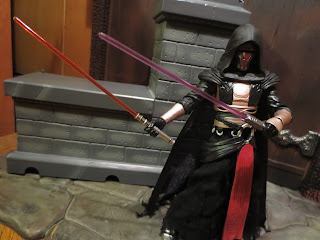 Is Revan the figure to beat for this series?  I haven't reviewed everyone yet, so I'll hold off for now, but he absolutely is a Great and a 1/2 figure. I just wish his hood had been handled a bit better. His lightsabers are both really cool while his cloth cape and robes are excellently weathered and frayed. He's quite impressive and definitely seems like he could be the hardest figure to find in the set. Not bad for someone who doesn't even exist in the official Star Wars canon currently. Maybe they'll work him in somewhere. The Old Republic era definitely is still rich ground for mining new tales.

This is the first figure of Darth Revan I've ever owned, so I don't have any more Revan reviews. I do have more reviews of Black Series: Phase III figures, though: