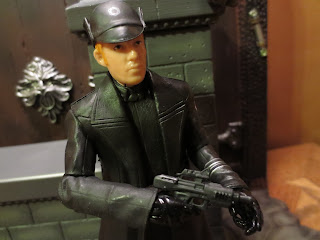 While he doesn't have the same on-screen flair as Grand Moff Tarkin (but honestly, who could match Peter Cushing), General Hux still serves as the face of the First Order. Played by actor Domhnall Gleeson, General Hux was first introduced in The Force Awakens publicity material thanks to the incredible shot of him standing and delivering a speech on Starkiller Base to inspire the armies of the First Order. Invoking imagery of Nazi Germany and the Third Reich has always been present in depictions of the Galactic Empire but the First Order takes things a bit further: If you've been reading the various new novels and tie-in companion books then you'll notice that the secret building up of the First Order from the ruins of the Empire is readily comparable to Germany's growth and militarization prior to World War II. With General Hux here, you're getting a very grim looking figure that is prepared to both lead your First Order troops and bicker with Kylo Ren. Hux is part of the fourth series of figures in Phase III of The Black Series and is hitting some store shelves right now. He was a Christmas gift from my parents! Ready for a closer look at General Hux? Then join me after the break... 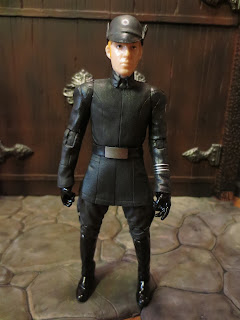 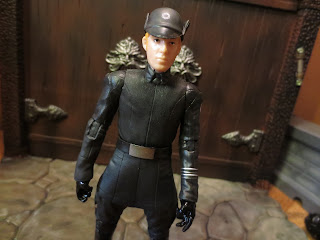 * You know what I love about this figure? For one, he actually looks pretty decent if you remove his jacket. The jacket is just a "shell" piece for the torso but the sleeves match the uniform fairly well. At a glance, it's tough to differentiate this from Hux's standard outfit. It's not often that a figure with a removable outfit piece like this looks OK but Hux bucks the trend. That's First Order efficiency for you! 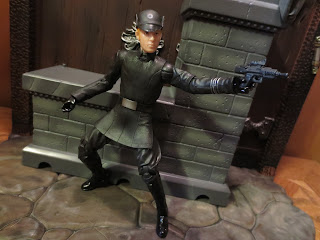 * What does an Imperial or First Order officer need to be able to do other than stand around and look smug? Not much, really, but that didn't keep Hasbro from giving Hux the same fairly solid articulation most other figures in the line have. His joints are sturdy and they have a great range of motion. There are cuts on the bottom of his shirt which help to ensure that his hip motion isn't impeded and a nicely hidden ball jointed waist preserves the aesthetic of his sleek officer's uniform while still allowing him some movement. 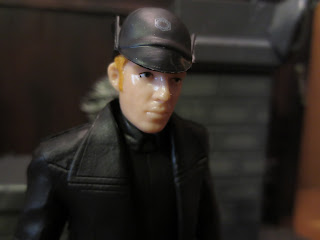 * At first I thought this figure looked a bit too generic but, as I held it up to some photos of General Hux, I changed my mind. It definitely looks looks like Hux in person. The uniform is great, too, and Hux's uniform is incredibly well sculpted. There's a ton of detail on his shirt and his black books actually look shiny and reflective. He's also rocking the flared-hip breaches. 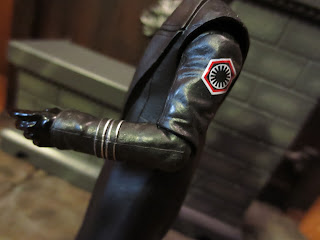 * While he's decked out in all black (and very, very dark gray) General Hux does have a number of different shades of black on his uniform that add a great deal to his appearance. He also has a cool series of silver stripes on the forearm of his left sleeve and the First Order insignia on his left shoulder pad. I wonder if he has a giant tattoo of that on his back somewhere. What Imperial or First Order officers do you think were rocking tramp stamps? Share your thoughts in the comments section below! 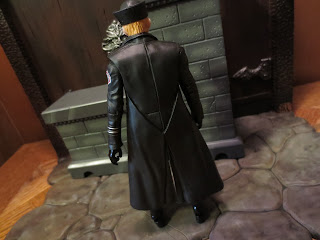 * I really like General Hux's coat. It's made of Gaberwool and has some decent sculpted detail to add to the sleek, authoritarian vibe that anyone wearing this greatcoat would have. As I mentioned above, it is pretty easy to remove and doesn't feel the least bit flimsy. It's rather intimidating, even for a 6 inch action figure. 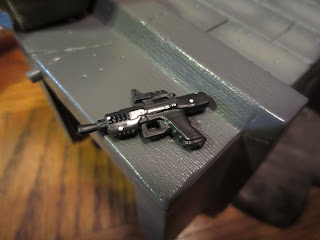 * General Hux only comes with one true accessory: His modified SE-44C blaster pistol. It's the same weapon that comes with the First Order Tie Fighter Pilots although the bolts on the front and back are painted. Apparently, in universe, the trigger is coded to only fire when it reads Hux's fingerprint. Of course, he's wearing gloves, so will it work? 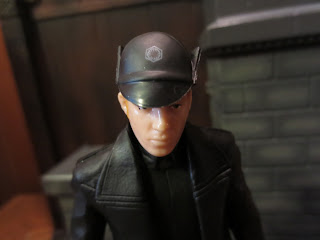 * I just know that it certainly cannot be First Order regulation to wear one's command cap askew. Unfortunately, my Hux is trying to add some swag into his demeanor and thus his cap wasn't glued on perfectly straight. I usually wouldn't care about just a little bit of crookedness on a figure but this is the First Order: Those nerf herders are sticklers for details. 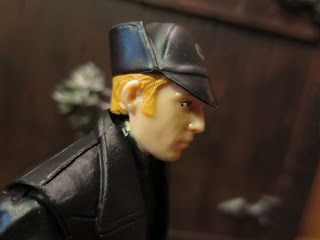 * Hux us supposed to be a ginger (actor Domhnall Gleeson played a Weasley, you know) but this hair really comes across as more blonde. I definitely think a darker color was in order. Fortunately, they did capture his sweet sideburns, always the hallmark of a good Imperial or First Order officer. 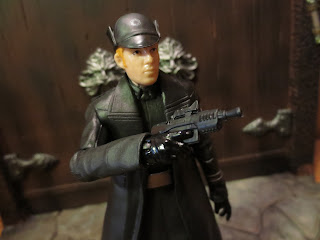 Hux is a pretty nice figure. He's not perfect (I'm still iffy on the headsculpt, I think, and a bit miffed by his crooked hat) but he's definitely a unique looking Star Wars Black figure. I'm glad to have him although he definitely makes me all the more eager to receive a Grand Moff Wilhuff Tarkin figure in The Black Series. Fans building a First Order army should have a field day with him and customizers should be able to mine him for parts in creating their own Imperial and First Order officers whom Hasbro might not make. This guy gets a Good and a 1/2 rating from me while Kylo Ren says that Hux makes him want to break three computer consoles and knock over a curio cabinet. Whatever the heck that means, right?