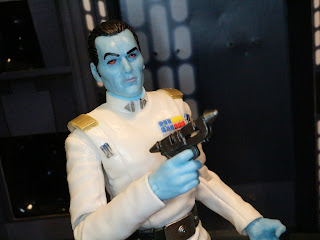 When Lucasfilm and Disney officially announced that the Expanded Universe was no longer considered to be canon, I'm pretty sure the first things that came to my mind were Mara Jade, Shadows of the Empire, Kyle Katarn, and Grand Admiral Thrawn. I didn't get into Star Wars into the early/mid 90s (I was probably 11 or 12) and the books and video games were all the rage among Star Wars fans. While I was never much of an Expanded Universe reader after the release of Episode 1, I absolutely kept up with it throughout the mid 1990s and thus there was never a time for me growing up when those early EU characters like Thrawn, Mara Jade, Kyle Katarn, Dash Rendar, and Prince Xizor differed from film characters in terms of how seriously treated them. I had posters, action figures, and Micro Machines of them; why would I view them differently? Fortunately, Lucasfilm has been taking some EU concepts and characters and weaving them back into the Star Wars canon. Grand Admiral Thrawn, now also known as Mitth'raw'nuruodo, is back in both a new novel by character creator Timothy Zahn and in season 3 of Rebels. Seeing Thrawn in the Black Series was a great surprise and my most anticipated figure of SDCC 2017. While Thrawn will be appearing on Force Friday in the standard Black Series line, this deluxe version of the character was an SDCC exclusive. I picked him up ASAP and I'm glad that I did as he is incredible. Let's take a look at this cool action figure after the break... 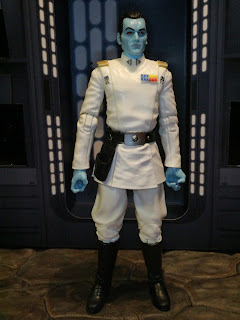 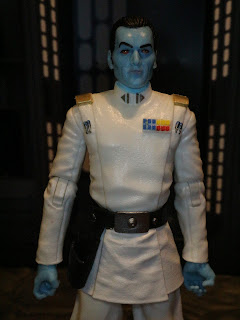 * Grand Admiral Thrawn looks perfect. I love his crisp, white uniform decorated with epaulets, rank insignia, and code cylinders. Thrawn has a very simple look but Hasbro nailed it perfectly. This is a solid figure of a well loved character, so it's nice to see how awesome he turned out. These figures based on characters appearing in Rebels have all turned out near perfect, haven't they? 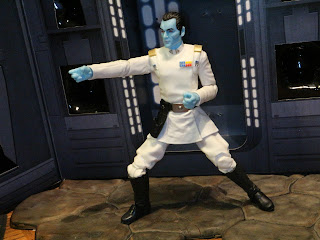 * While he's certainly not going to be doing any Spider-Man poses, Thrawn still has good articulation. There's nothing hindering his movement (the bottom of his tunic is made from a very pliable plastic) and he has a full range of motion at every joint. . 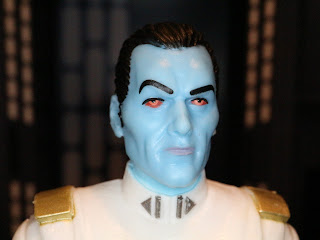 * I really like the headsculpt. My picture is definitely showing the sculpt much larger than is, so the eyebrows look a bit too heavy, but in person he looks great. I love the heavy brown lines, the piercing red eyes, and the slicked back black hair. 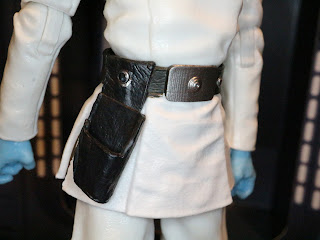 * Thrawn's belt not only looks like it's made from actual leather and adorned with an actual metal buckle (it's all plastic, though) but it holds his blaster pistol perfectly. 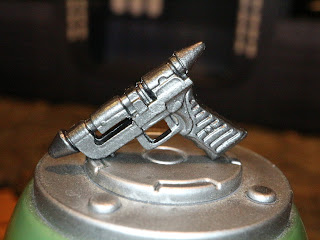 * Here's a close-up of Thrawn's unnamed blaster pistol. This thing is gorgeous and fits perfectly in Thrawn's hands and in his holster. I love the design of this pistol! 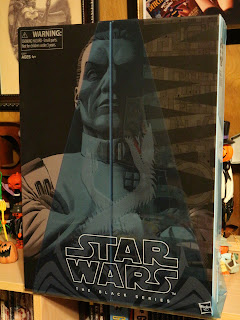 * I don't usually talk about packaging, but Thrawn's is pretty unique. It's quite large and features a translucent blue wrap that can fit over the black and white portrait of Thrawn, helping to give the Chiss his familiar blue color. It also folds open in the middle.... 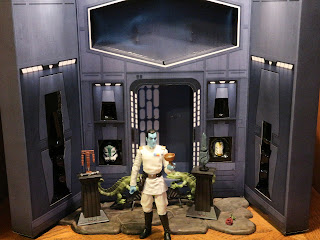 * And turns into Thrawn's office from Rebels! Is this package collector friendly? Well, you can open it up to look at the figure without destroying anything but to remove most of the items and Thrawn himself? You'll have to cut some plastic ties. Once you take everything out, you can replace everything easily except Thrawn and the Ysalamiri statue. Those two don't fit into a vacuformed tray. 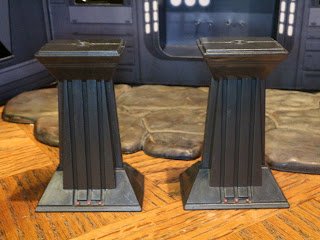 * Thrawn finds value in collecting the art and artifacts of those whom he must face in combat, so he has all kinds of cool random stuff lying around (kind of like the headquarters of Action Figure Barbecue!). To help display everything Thrawn comes with two pedestals for holding artifacts. They each have a hole in the top that two specific items can fit into. 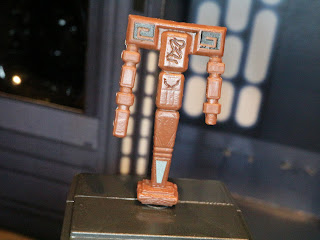 * The first is the Kalikori of the Syndulla family. A symbolic piece of family art for Twi'leks, the Syndulla family's Kalikori plays a role in season 3 of Rebels. It plugs into the base of one of Thrawn's pedestals and looks pretty impressive on display. There is some nice sculpting on the various parts of the heirloom. 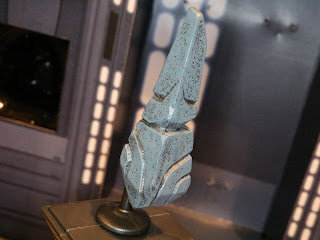 * The second item that plugs into a pedestal is the Haakskeekah Stone from the film The Dark Crystal. I have no idea why it's here but it certainly doesn't look out of place, does it? The sculpt and paintwork is quite impressive. 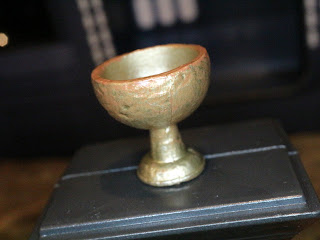 * Another cool accessory is the Holy Grail from Indiana Jones and the Last Crusade. I love this accessory! What a cool Easter egg (no pun intended)! The paintwork is quite impressive on this. What makes me even happier, though, is that as I was showing this to my daughter last month, she immediately recognized it as "the cup from Indiana Jones." Parenting points for me! 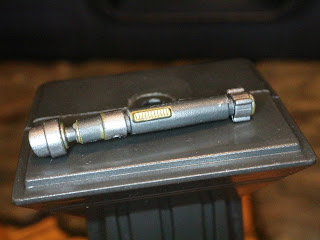 * Thrawn also comes with a lightsaber. I don't know that anyone has identified this particular lightsaber, so maybe it's just meant to be a generic lightsaber he picked up somewhere in his travels. 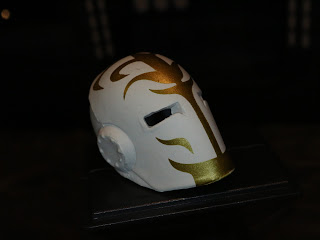 * I'm not going to try to rank these accessories in terms of coolness, but if I were this helmet from a Jedi Temple Guard would absolutely be near the top. Not only does it look amazing, but it can actually fit on the Kanan Jarrus figure to reenact some season 3 scenes. 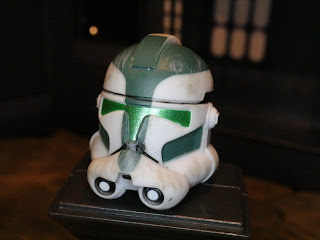 * Another interesting item Thrawn seems to be keeping around is Commander Gree's helmet. It's actually painted differently than the helmet on the Toys 'R Us exclusive Commander Gree figure, but it definitely look cool. 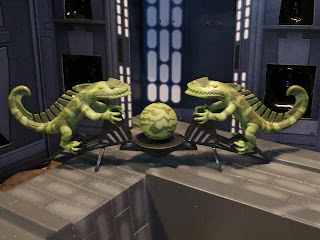 * Last, and certainly not least, is this giant statue of two Ysalamiri staring at each other. While the Ysalamiri were actual living creatures in the Expanded Universe, here they are just statues. It seems like the current canon doesn't want to introduce their Force nullifying powers (which makes sense) so maybe they're mythological beings now? 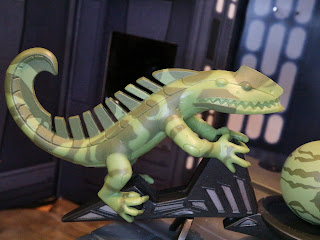 * Here's a close up of one of the Ysalamiri. It looks really impressive with some cool paintwork to give it a camouflaged appearance. 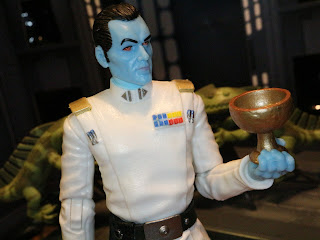 If you ask me which action figure release won SDCC, I think that it is Thrawn without a doubt. He's a nicely executed figure of a popular character we never thought we'd see in the Black Series who comes packaged with some very, very cool accessories. Thrawn's packaging, while not exactly truly "Collector Friendly," does also make for a cool way to display the figure. While Hasbro will be releasing Thrawn by himself (with only his blaster) as a standard figure on Force Friday II, I really think the cool accessories this guy comes with make him a must buy for Star Wars fans. There is some pretty impressive stuff here and it is doubtful we'll ever see Hasbro produce some of this stuff again.

This is the first Grand Admiral Thrawn collectible I've reviewed on Action Figure Barbecue. I have reviewed plenty of other Star Wars: The Black Series action figures from Phase III, however, including: