Road to Rogue One: Scarif Stormtrooper from Star Wars: The Black Series Phase III by Hasbro 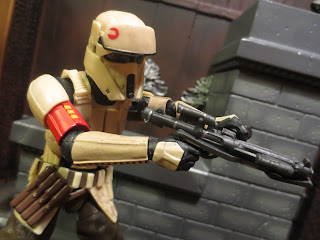 While the Imperial Death Troopers seem to be the early favorite in the race for coolest costumed characters, I'm actually digging the Scarif Stormtroopers even more. Also called Shoretroopers, the Scarif Stormtroopers patrol the tropical planet of Scarif, home to a number of top secret Imperial installations. I love their mixture of a more traditional military color scheme with some of the standard flare of Imperial Armor. While the Squad Leader is a regular release, this standard Scarif Stormtrooper is actually a Wal-Mart exclusive, like last year's Imperial Shock Trooper. These still haven't hit in mass yet, but they do seem easier to find than the Shock Troopers. Let's take a closer look at these beachfront troopers after the break... 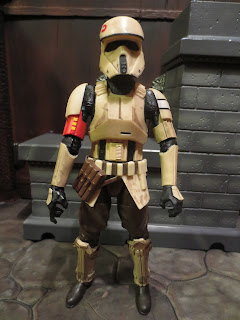 Non-Scalper Price: $17-$20 dollars (Wal-Mart has advertised some sales on these guys) 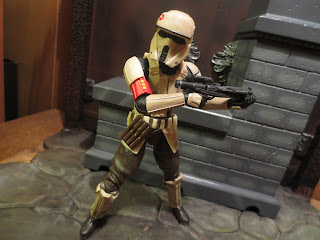 * Largely based on the body of the Hovertank Pilot, the Scarif Stormtrooper has the same excellent articulation that figure had. I absolutely love this guy and I don't think a day has gone by since I received him in the mail that I didn't pick him up and spend a few minutes posing him. He just moves so well! 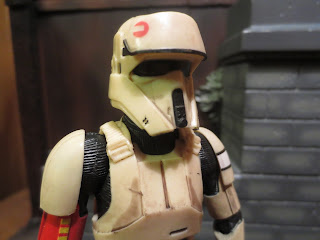 * The helmets are really, really cool on the Scarif Stormtroopers. I'm not sure what the heavily armored piece on the brow is (maybe some sort of blast shield?) but it looks really cool. Again, this seems to be a design theme with other troopers in this same environment, so maybe the film (or the visual dictionary) will explain what's going on here. The paint is really cool, though, as there's actually a dirty wash on the helmet. 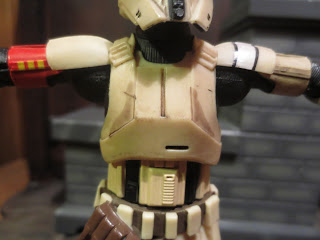 * Here's a look at the main torso. This is an incredible armor design with some killer paint apps. Hasbro doesn't always use subtle effects like these on their figures so it really stands out here. I'm also digging the red and yellow design on his right bicep. 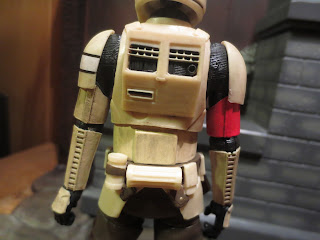 * Here's a look at the back of the armor. Take note of he incredible paint apps and dirty wash all over this guy. One of the best Black Series figures I've seen in regards to paint work. 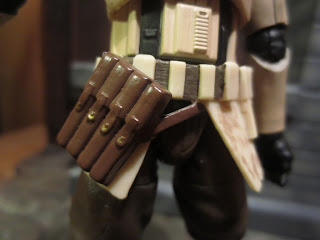 * The standard Scarif Stormtrooper is pretty similar to the Squad Leader (review coming soon!) with the main difference being that the standard trooper has some short flaps here and an ammo pack. It looks really cool and the don't hinder the hip articulation much at all. 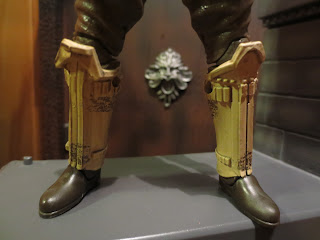 * The Scarif Stormtrooper is wearing some pretty slick boots. I love the details on them (the knee pads are also asymmetrical, just like a standard Stormtrooper's footwear) and the paint weathering continues down here. Hasbro really has done an amazing job with the paintwork here. It's a huge improvement over many other figures in the history of the line. 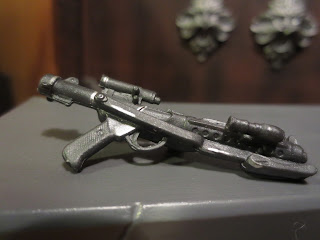 * The Scarif Stormtrooper comes with an E-11, but what's cool is that not only is this a new sculpt of the E-11 but it features some sort of sensor or target designator on the barrel. Lots of the Rogue One figures have these designators, so I'm wondering if this is a feature we'll see used in some way in the film. The paint apps are awesome on this, too, with lots of silver detail and wear and tear painted or dry brushed on. 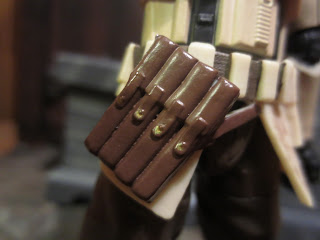 * The ammo pouch still looks really cool, but I kind of wish it had truly been a separate piece hanging off the belt rather than just a sculpted part of the flaps. It definitely would have made it feel a bit more lifelike. 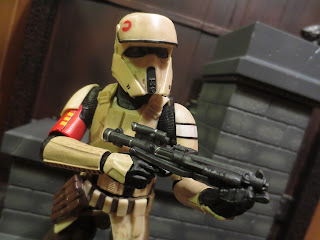 The Scarif Stormtrooper is just one of those figures that is insanely fun to play with and that looks awesome on display in any one of a number of poses. The paintwork is exceptional, the costume design and sculpting nearly flawless, and his blaster rifle is one of the best accessories in the line. Seriously, this guy is one of the best Black Series figures yet and an easy Epic figure. Good luck finding him, as everyone needs at least one of these guys chilling out on their shelves!