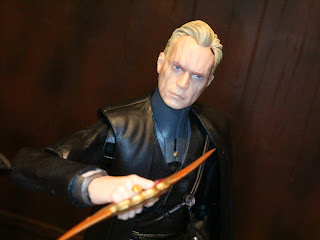 Today I'm checking out another figure from the newest series of Star Wars: The Black Series figures and this time it's the public face of the Crmson Dawn crime syndicate, Dryden Vos. Played by Paul Bettany after the original actor couldn't be present for the Ron Howard directed reshoots (Michael Kenneth Williams originally played the role with the intention of Vos being a motion captured character, possibly a Lasat), Vos provides Han Solo a charming yet menacing introduction to the true nature of the criminal underworld. Since Bettany joined the cast later it took longer for Hasbro to get us an action figure of him. Where's a decent Qi'ra now, huh Hasbro? Anyways, Dryden Vos is one of the two Solo characters in this series. Let's check him out after the break... 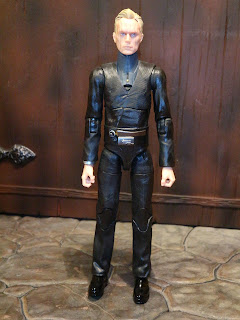 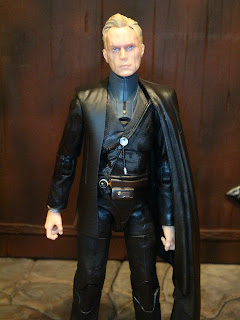 * Overall Hasbro continues to do a stellar job of offering realistic, authentic looking figures in this series. While on the surface Dryden Vos is a fairly regular looking guy dressed in black there's actually a lot going on here. His jacket/ coat combination does make him seem like a much more complex figure as does the various textures on his vest and trousers. He also has a few cool details on his chest such as the datapad that he wears attached to his midsection and the ornamented clasp of his cape. 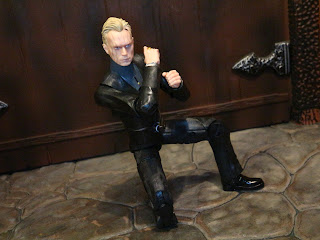 * Dryden Vos is well articulated and can take quite a few poses, particularly if you remove his cape/ jacket. He actually looks pretty decent without the cape, too, unlike many figure with a removable coat or such. He's sturdy and well made. 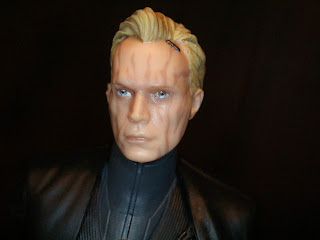 * The faceprinting here goes a long way towards making this figure greatly resemble Paul Bettany. The hair is just right, too, and you can even see the mechanostaple near his hairline. The striation on his face is slightly visible. This was a cool element of the character in the film and seeing it here goes a long way toward giving Vos a menacing presence. But wait...there's more! 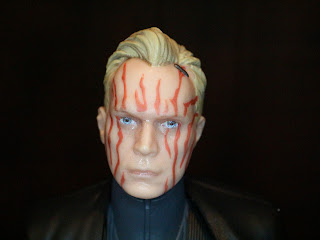 * Maybe I missed it but a user at JediTempleArchives mentioned this morning that Dryden Vos reacts to the cold (thanks Jaken Wraith!). I immediately threw Dryden in the freezer and was amazed at how quickly the marks on his face turned a bright, crimson red! How cool! 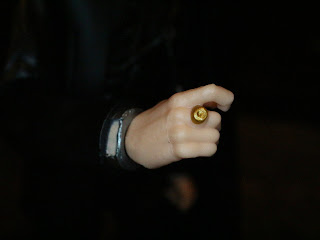 * While he doesn't have the weird thumb claws that the character has in the film, Dryden does have his Crimson Dawn signet ring on his right hand and his wrist communicator. 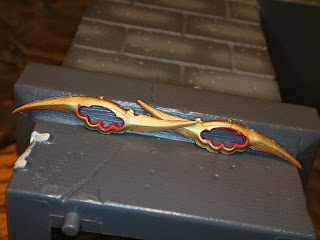 * Dryden Vos includes the dual Kyuzo petars he uses at the end of the film. The look cool and easily fit in his hands. They're sharp looking, huh? 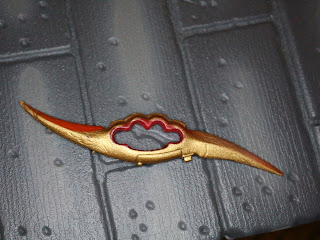 * Guess what else? Pop these babies in the freezer and they'll also begin to "glow" with energy. Yup! The petars turn red, too. On the petar to the right you can see how the left side is red after being in my freezer for a minute or so while the right side, which I rubbed with my fingers to heat up, is just gold. Neat! What other Star Wars figures do I need to be freezing? 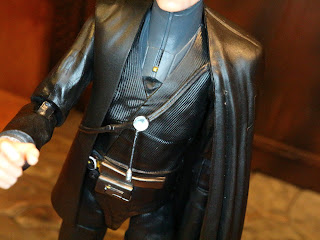 
* Dryden Vos' cape has this cool clasp that keeps it in place but it is kind of finicky and feels a bit fragile. It doesn't stay in place very well. 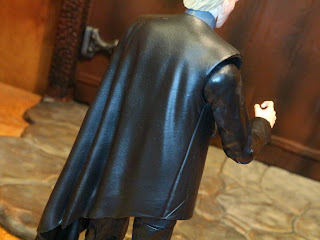 * From everything I've gathered, Dryden Vos is supposed to be wearing a Pantora-silk suit jacket and an off the shoulder cape. It seems that Hasbro combined the two into one piece and while it looks OK from the front, it looks weird from the back. Personally, I would have liked to have seen the jacket as the plastic piece with a soft goods cape off the shoulder. That would have been the way to go here. This looks fine on display but it falls apart when posing the figure. 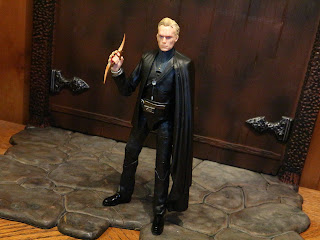 Hasbro continues on a role and Dryden Vos is another solid entry in the Black Series. While he may not be the most exciting figure, the little details and the thermochromic paint go a long ways towards giving Vos some much needed pizazz. While I do wish his cape were handled differently and the presence of a coaxium container or one of his artifacts would have been cool, finally having Dryden Vos in the line is very welcome. Now we just need a new Qi'ra! Come on Hasbro! Make it happen!

This is the first action figure of Dryden Vos I've reviewed. For more Star Wars: The Black Series figures check out the following: