Christmas Haul 2020: Mr. T from Masters of the WWE Universe by Mattel 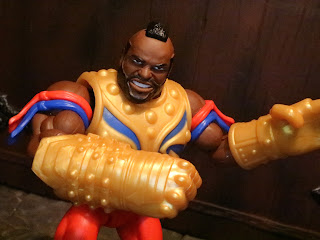 While 2020 is universally regarded as one of the worst years ever, you do have to give it credit for being the year when Mattel introduced Mr. T into the Masters of the Universe line. Well, at least they introduced him into the Masters of the WWE Universe line, but that's close enough for me at this point. Mr. T, y'all. How amazing is that? I received him as a Christmas gift this year and I do think I spend the most time messing around with him on Christmas day. The Heroic Pitier of Fool, Mr. T is one of the heroes of WWEternia! It's truly amazing to have a figure of one of the coolest human beings on the planet to battle the evil forces of Skeletor and make them quit their jibber jabber. Let's check out Mr. T after the break... 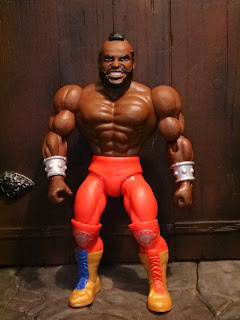 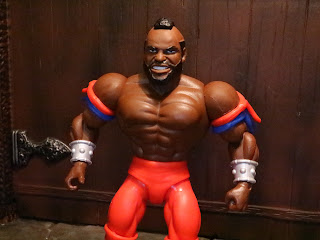 The Positives:
* Who is this? It's Mr. T! First name: Mr. Middle Name: Period. Last Name: T! Yup, this is absolutely Mr. T rendered in the scale and style of a Masters of the Universe figure. While there are parts used to make him fit in with the MOTU concept better I do believe his pants are based on what he wore at Wrestlemania I when he teamed up with Hulk Hogan. 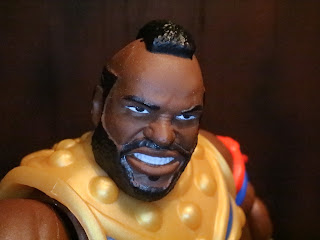 * The head sculpt is fantastic. Mr. T looks ready to hurt some fools! Seriously, I love the portrait here. It's a bit stylized, sure, but it's amazing! Mattel did a really good job. There's no way anyone familiar with Mr. T couldn't pick this up and fail to recognize him! 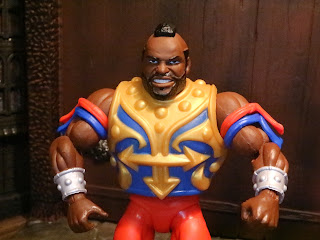 * When he needs to wear a bit more protection Mr. T can pop on something just a bit stronger than gold chains: Some golden armor! Mr. T comes with the armor from the Masters of the Universe Classics Jitsu (who I never reviewed) and it fits him quite well. The blue and gold definitely makes me think of Mr. T's iconic 1980s look and it's very fitting for this line. 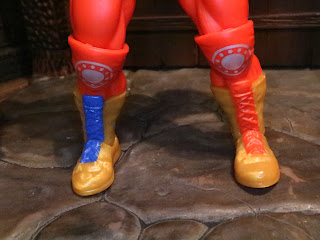 * He's sporting some cool boots, too, with red and blue laces and a pattern on his kneepads. 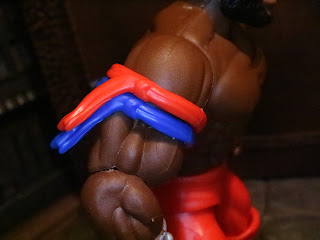 * On each of his biceps Mr. T is wearing a red and a blue ribbon. These are rubbery pieces that can be removed and, since you've got four of them, you can customize his look with them, too. 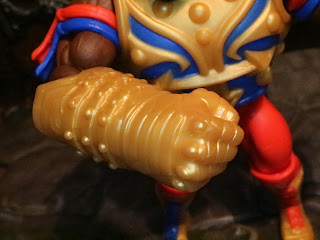 * Mr. T comes armed with two different gauntlets which are named Jibber and Jabber according to his minicomic. The right gauntlet is based on Fisto's fist and is molded in gold plastic. Roman Reigns came with this same accessory, though his was silver. 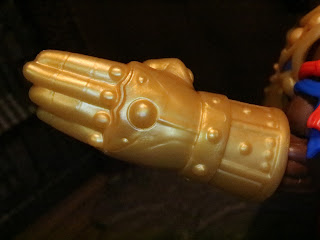 * Mr. T's left hand gauntlet is based on Jitsu's fist and is designed to look like a karate chop" hand. 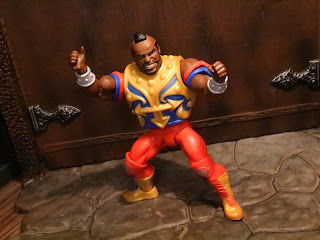 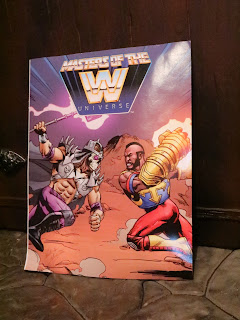 * Behind each standard MOTWWEU release is a minicomic of sorts. It's only 4 pages (cover, bio, comic, and back page with cross sell art) but it looks cool and does offer some information on the role of the characters in WWEternia. There are some cool Easter eggs here including a nod to B.A. Baracus' fear of flying (that was the character Mr. T played in The A-Team) and the cover being an homage to the vintage minicomic "The Secret Liquid of Life" which featured Geldor, a villian who kind of looked like Mr. T. 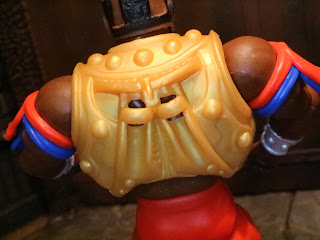 The Negatives:
* Y'all know that giving an action figure a holster, sheathe, or any place to store accessories without including said accessories is one of my pet peeves. Unfortunately, some fool decided to give Mr. T Jitsu's armor without giving him the kama that Jitsu included. 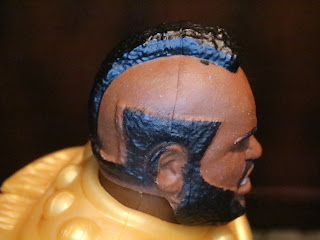 * My prediction is pain for whoever did the sloppy paintwork on Mr. T's distinctive Mandika inspired hairstyle. Seriously, the sculpt is excellent but the paint is all over the place, including on Mr. T's ears! 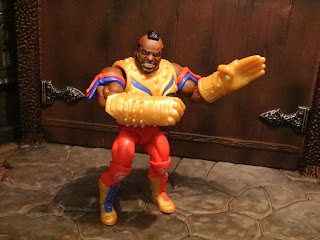 You can hate Masters of the WWE Universe all you want for being a weird blend between WWE and MOTU (I love it) and you can hate the Origins style body but don't you dare give me no jibba jabba about this figure. Despite those small flaws, which I don't hate but do pity, I'm utterly grateful to have a MOTU inspired Mr. T action figure on store shelves. This action figure is truly one of the best parts of the year. Seriously, Mr. T seems like a pretty cool guy and really is a pretty inspiring, positive person and I think he and He-Man would get along really well together. Add him to the Heroic Warriors because that's where he belongs!
Epic!
If you're a fan of Mr. T (and who isn't?) then check out my review of NECA's Clubber Lang (Pre-Fight/ Black Shorts) from Rocky.
For more Masters of the WWE Universe check out the following:
Braun Strowman
Faker John Cena
"The Fiend" Bray Wyatt
Finn Balor
Grayskull Mania
Jake "The Snake" Roberts
"Macho Man" Randy Savage
The New Day
Rattlesnake Mountain Ring
Rey Mysterio
The Rock
Roman Reigns
Seth Rollins
Sting
Triple H
Ultimate Warrior
Undertaker
Posted by Barbecue17 at 1/12/2021