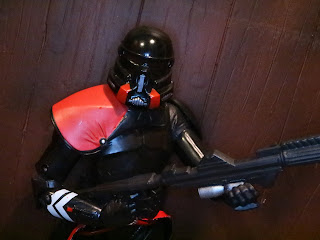 While Hasbro released quite a few figures in Star Wars: The Black Series during the last few months of 2019, they really didn't release that many from The Rise of Skywalker: 8 were from Episode IX, 5 were from The Mandalorian, 6 were from the Original Trilogy, 2 were from Clone Wars, 1 was from the comics, and 3 were from Jedi: Fallen Order (I'm not counting the Carbonized variants, because those are just chase variants). For The Black Series releases from Triple Force Friday, only 32% were from the new film. That's pretty crazy, right? I liked The Rise of Skywalker but it definitely seems that Hasbro didn't have that much faith in it moving merchandise. They've got some cool stuff coming out in the next few months, although definitely not the amount of product you'd expect to show up based on a new film. Anyways, let's talk about today's figure: The Purge Trooper from Jedi: Fallen Order, the new single player Star Wars video game. I preordered to deluxe edition of the game which actually came with this figure, although GameStop did sell some of the figures by themselves (presumably figures from preorders that folks didn't pick up, as the figure wasn't packaged with the game). The Purge Stormtroopers first appeared in the Darth Vader: Dark Lord of the Sith comic in 2018 and are a special group of troopers under the command of Vader and the Inquisitorious. Apparently these troopers are the last batch of Jango Fett based clones and they definitely dress in similar armor to the clones. There are multiple different types of these guys in Jedi: Fallen Order, but this guy is actually a Purge Stormtrooper Commander. Let's check him out after the break and see how this guy turned out after the break... 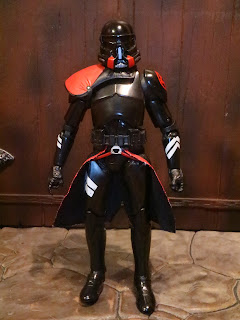 Accessories: DC-15 and DC 15A blasters

Non-Scalper Price: $23 dollars by itself or $83 dollars bundled with the game ($93 for the deluxe game bundle). 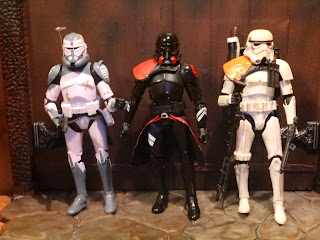 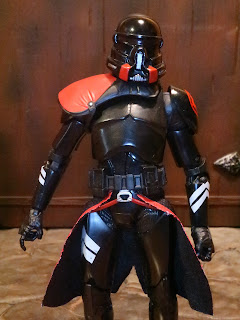 * If you own any of the Phase II clones or commanders, you kind of know what to expect here. That being said, this figure does look really good. The armor is very striking in person with a very glossy black and blood red accents. These guys are quite fearsome. I like the addition of the shoulder pauldron and the white stripes on the armor. It's very ceremonial looking. The colors and pageantry of the uniform definitely seem very reminiscent of the SS, which isn't a good thing on its own (seriously, Nazis suck) but it does visually tie in to the idea of the Empire being space fascists. I mean, these guys are essentially hunting down the Jedi in an effort to purge them from the galaxy. You'll now be even more enthusiastic every time Cal Kestis takes one of these guys down, won't you? 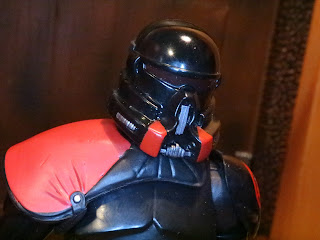 * The helmets on these guys are really cool. They're very different from both Stormtrooper and Clone Trooper helmets, actually very similar to the Clone Paratrooper helmets. The visor is a very deep, dark maroon color. 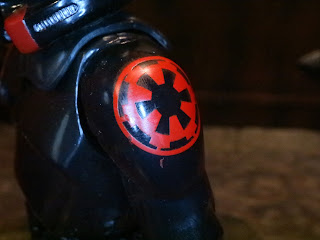 * Another mark identifying this as a Purge Trooper Commander is the blood red Imperial cog on the Trooper's shoulders. It looks great (please ignore the "lens flare" in my photo). 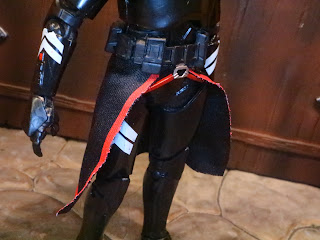 * While the Purge Troopers kamas look a lot like the kamas of some of the clone leaders, like Captain Rex, it's actually a but different. Well, the belt is, anyways. There are no holsters and there also are two red plastic pieces that trail off from beneath the belt buckle and rest under the edges of the kama. The kama can rest under them, too, but I think having them under the kama is correct. 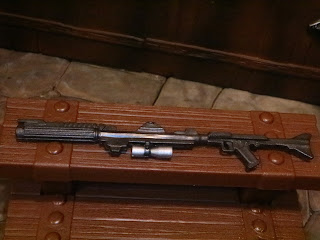 * The Purge Commanders carry many of the standard Clone Trooper weapons, one of which is the DC-15. We've seen this weapon dozens of times in the Black Series, but here it is again. It's not weathered at all but it does have a paint application on it. 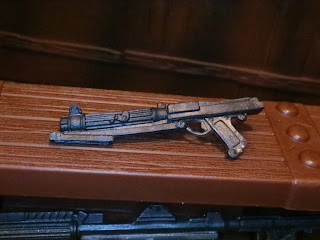 * Next up is the DC-15A, another popular Clone blaster that has been included with most clone trooper releases. 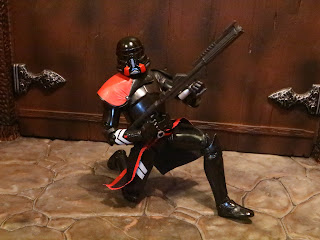 * The Purge Trooper/ Commander utilizes most of the body of a standard Clone Trooper figure, meaning he's durable and nicely articulated. His hips are restricted a bit and, sadly, his shoulders don't have the revised pauldrons that allow for a better range of motion. Still, he's not bad; just not as good as recently crafted figures.

* The lack of the newer shoulders that slide under the armor is missed here, and the joints are starting to show their age. 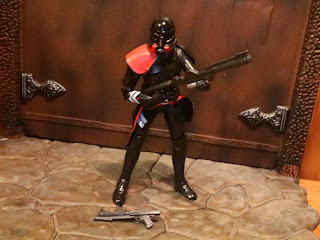 The Purge Commander (this isn't the standard Purge Stormtrooper, despite what the package says) is a Great figure. Yeah, there's a lot of reuse here, but the consistency still works for these troop builder styled figures. The guy will definitely jump out on your shelf, particularly if displayed alongside your clones or standard Stormtroopers. I really wish we'd gotten some of the more unique weapons these guys wield in the game that allow them to fight against the Jedi (like electrostaffs and electrobatons), but maybe we'll get some of the variant troopers wielding those down the line later on. Fallen Order is an excellent game and I really hope Hasbro revisits it from time to time for more figures, as I'd love Greez Dritus, Cere Junda, the Ninth Sister, Jaro Tapal, and Merrin to make appearance in the line.