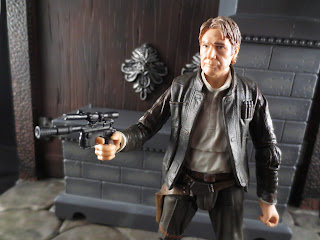 When we first started seeing leaks and teasers for product from The Force Awakens I think everyone was surprised that next to nothing was shown for the big three of the Original Trilogy. In October Han Solo was finally the first of that trio to have an action figure revealed and now he's finally here! Released as part of the first series of 2016 figures, I have to admit that it's incredibly exciting to have a new variation of one of the classic crew. While it was incredible having tons of new action figures based on new characters whom I knew next to nothing prior to the film's release, having a new variation of an old favorite is a surreal experience. Harrison Ford's Solo was brilliantly used in The Force Awakens. While he's certainly one of the stars of the film, he also sets up the three main new heroes (and Kylo Ren) as credible, competent characters who earn Han's respect (or prove to be a credible threat to him). I've heard it said that Han is kind of an audience surrogate character in the original trilogy and here, in the Force Awakens, he's the one who tells us that it's OK that things are going to be a little different around the galaxy and encourages us to enjoy ourselves and get invested in these new stories. Ford's latest outing as Solo was as good or better than any before, no doubt about it. So how's his latest action figure? Find out more after the break... 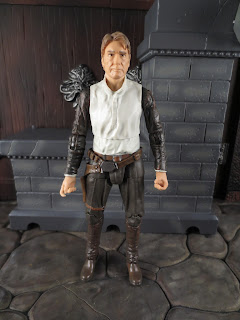 
* For me, just the fact that this is a new Han Solo variant is just a huge plus. I mean, did anyone ever think we'd ever get a Star Wars sequel film with the original cast, specifically Ford as Solo? I didn't! It's amazing to have this figure! I love you, Han! 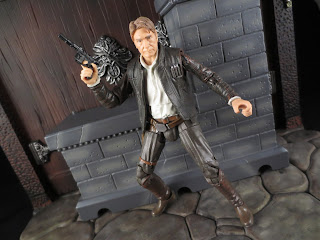 * For a guy in his 70s, Han Solo can still move! Seriously, I think Han Solo is one of the best articulated figures in this line. He doesn't have any extra points of articulation or anything but everything he does have works fantastically and has a great range of motion. Honestly, he's one of my current favorite figures to pose and mess around with as there are just plenty of cool ways to pose Han. 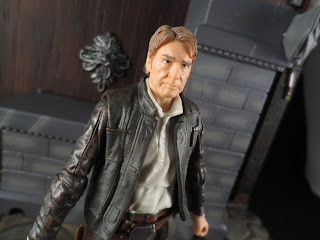 * I'm really impressed by this sculpt. For someone with a likeness that's known to be notoriously difficult to sculpt, I think Hasbro hit the nail right on the head. This is absolutely Ford as Solo. It's definitely one of the better human likenesses in the Black Series so far. 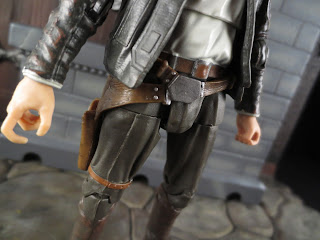 * Han's holster belt isn't removable but it is a separate piece fitted over his waist. The belt has a leather-like texture to it and the appropriate silver paint apps to represent the studs and belt buckles. The holster is permanently attached to the right leg and is always in place for a perfect draw. 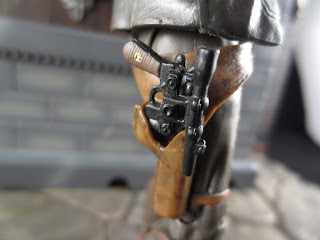 * It just wouldn't be right if Han didn't come armed with his trusty BlasTech DL-44 blaster, would it? Fortunately, he does. It's a nice representation of the pistol and is actually a different sculpt from the version that came with the original Black Series Han Solo. It's a smaller pistol but it has some nice paint application and some fairly sharp sculpted detail. It also fits perfectly in the holster on Han's right hip. 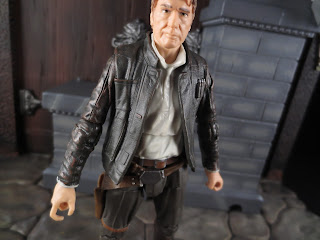 * Han's wearing a new jacket and as you can tell from pictures above, Han's Nerf-leather jacket is not removable. The main body of the jacket is a separate piece that slips over his torso but the sleeves are part of the sculpt. It's an effective technique and works well here to give Han a layered look.The paint work is pretty nice too; Hasbro's used a drybrushing of a lighter paint brown over the darker brown to give it a very accurate leather look. Han also has a pocket full of detonators, just in case. 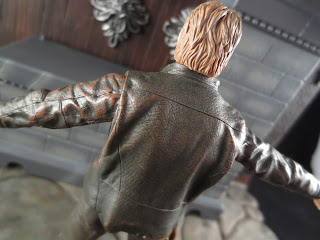 * The body of the jacket and the sleeves don't 100% match up in color. It's pretty close and nothing to get bent out of shape about but, if you look really carefully, you'll notice that the colors are just a bit different. 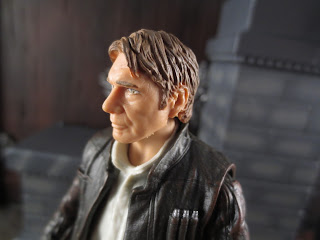 * The sculpting of Han's hair looks fantastic but I think the color might be off a bit. Does it look a bit too dark to anyone else? I think it needs a bit more gray in it. It doesn't look bad, it's just not accurate to the film. 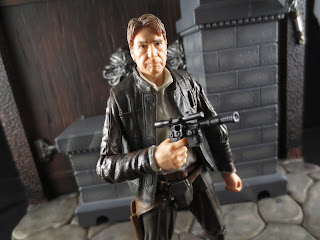 My only complaints about this figure are some fairly minor paint issues. I also wish Han came with another accessory, although I have a tough time of thinking for something for him to come with. He's a great figure, though, and it's really a pleasant surprise to see that Hasbro nailed the likeness on this one. I love action figures of some of my heroes as grizzled old men and it's nice to add Old Man Solo to the collection. Now, bring on General Leia Organa and Jedi Master Luke Skywalker! I want those three on my shelf to fight alongside the new heroes!

One of my first Star Wars figures ever was a secondhand vintage Han Solo in Hoth gear. I've reviewed a few other more recent versions of Han, though including the Black Series A New Hope Han Solo and the Han Solo (Stormtrooper Disguise) and the Hero Mashers Han Solo in his blue jacket from Empire.

I've reviewed plenty of other figures from the Black Series, including: