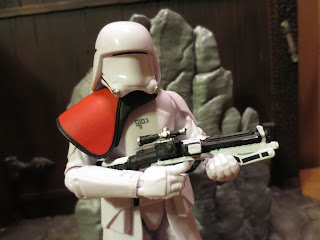 It's day three days of my December 2015 countdown to the release of Star Wars: The Force Awakens and I'm looking at another new Star Wars action figure release: The First Order Snowtrooper Officer from Phase III of Star Wars: The Black Series. The First Order Snowtrooper Officer is a Toys 'R Us exclusive and started appearing in stores in late October. It's interesting that we're getting this officer version of the Snowtrooper before the standard First Order Snowtrooper (he's scheduled to show up in a later series) and the Original Trilogy Snowtrooper. In fact, the Snowtrooper is the only one of the Stromtrooper variants from the Original Trilogy Hasbro hasn't released yet in the Black Series (technically they still need to release a Spacetrooper, too, but they're a bit more obscure). Anyways, how crazy is it that we're already getting so many First Order Stormtrooper variants in The Force Awakens? Let's take a closer look at this guy and enjoy the new Star Wars goodness we're getting! 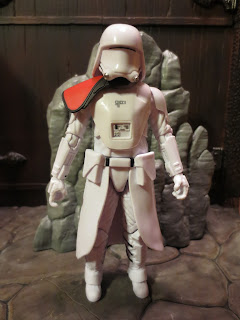 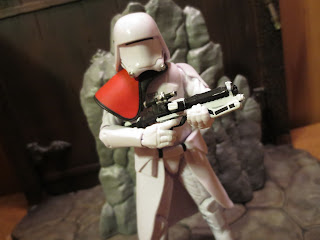 *The Snowtrooper Officer has the same great articulation scheme that most Star Wars Black series figures have. Considering that he's in thicker armor his articulation doesn't have as much of a range of motion as other figures, but he's still durable and quite fun to play with. 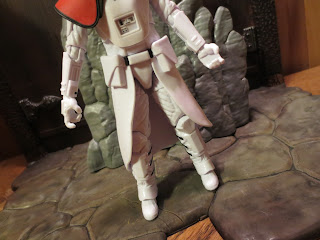 * While the articulation on the lower body is a bit limited by the kama, it's definitely worth noting that the kama is removable. It's made from a softer, more pliable plastic that can actually be slid down over his legs. Unless you were trying to put the figure into a vehicle I'm not sure why you'd want to remove the kama, but it's a nice feature. 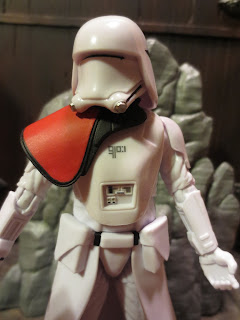 *The Snowtrooper Officer is an incredibly cool looking figure. Like the Firs Order Stromtrooper, the design takes everything that made the original troop design impressive and just augments it a bit. The First Order Snowtrooper armor really reminds me of the Ralph McQuarrie concept art for the original Snowtrooper. It's a great, clean looking design! As of this writing (Nov 16th) I'm reading through Star Wars Battlefront: Twilight Company and there's a character in the book who upon seeing Snowtroopers for the first time observes that while Stromtroopers look like skeletons, Snowtroopers look like ghosts. While they're referring to the OT versions, I think the comparison is still suitable with the new First Order versions. 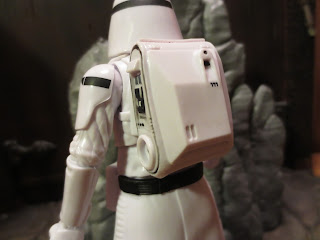 * The survival pack easily plugs into the Snowtrooper Officer's back via a peg. This really reminds me of the way the backpack functioned on the Power of the Force II Snowtrooper! The sculpt is really nice and features a number of small paint details  There are a few minor rough paint spots but overall it's a cool looking piece. 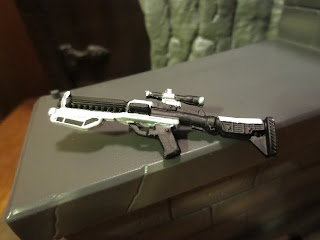 *The Snowtrooper Officer comes with a modified version of the standard F-11D blaster rifle. This version has the rear stock pulled out to improve accuracy (think these guys will be better shots than their predecessors?). The paint job is pretty nice on this accessory with white, silver, and black details. 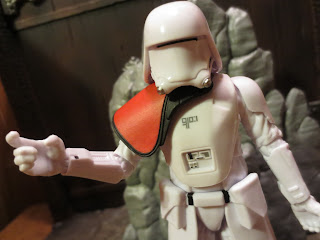 * The armored elements of the Snowtrooper Officer look really cool. The chest armor has a great shine to it and lettering on the chest is clean and sharp. There's also the crimson pauldron which is really what separates this figure from the basic Snowtrooper. It's a great looking piece and adds some cool flare to the costume. 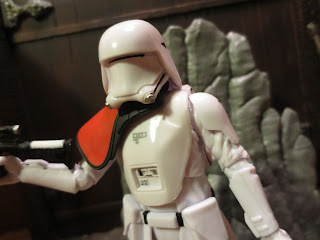 * My only real criticism of this figure (and most of the other Phase III figures) is that the heads aren't easily removable. I've tugged and tugged and I really don't think this head is coming off without risking some damage to the figure or without using some boiling water to loosen things up. The previous figures had easily removable heads, so I'm not sure why Hasbro made the decision to change things up. 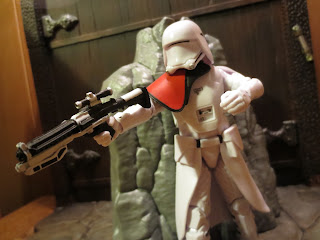 This is a great exclusive! While he's essentially a "pre-paint") of an upcoming standard release figure, I imagine that most collectors of this line won't mind having another Snowtrooper hanging around. For the time being this is a completely new figure with a cool rifle, great sculpting, and neat, clean paintwork. While many collectors seem to be having a tough time finding this guy in stores, keep checking out Toys 'R Us' website as he can be found on there from time to time with free shipping. He's definitely worth picking up, too, as he's a Great and a 1/2 addition to The Force Awakens collection.