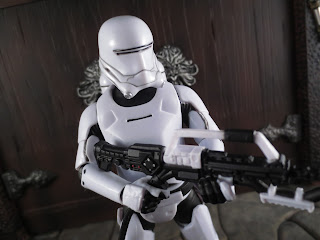 I really enjoyed the diversity of First Order troopers depicted in The Force Awakens. It's not only fun to see an array of different Stormtrooper specialties but it also gives Hasbro a reason to release a ton of different troopers. So far, by my account at least, they've released every combat trooper we've seen in the film in the 6 inch scale except the very cool Heavy Artillery Stormtrooper, so hopefully we'll see that figure released sometime this year. Today I'm looking at a trooper that doesn't have an Original Trilogy counterpart, although he does have a Clone Wars era counterpart: The First Order Flametrooper. Also known as roasters, hotheads, and burnouts, the Flametrooper is shipping as part of the first series of 2016 figures, packed two to a case alongside FN-2187, Han Solo, and Jango Fett. Ready for a closer look at the hottest Stormtrooper around? Then join me after the break... 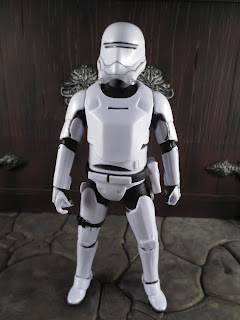 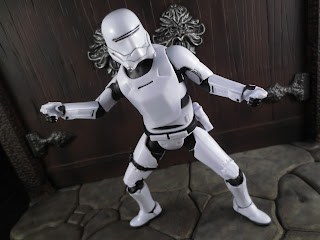 
* While he's adorned in some pretty heavy armor, the Flametrooper can still move really well for the most part. There's one problem (the elbows, which I'll get to in a moment) but for the most part this is another sturdy, quality, well articulated figure. 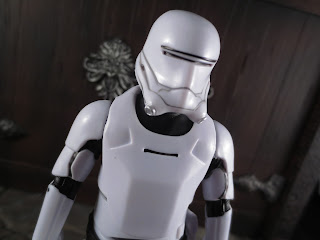 * As seems to almost always be the case, Hasbro has done an excellent job rendering an armored character like the Flametrooper as a 6 inch action figure again. The Flametrooper has an even sleeker armor design than the regular First Order Stormtrooper and that's all nice captured here. I like that the Flametrooper is a bit bulkier than the other troops; it seems fitting that he'd be wearing some armor with extra layers of protection against excessive heat. 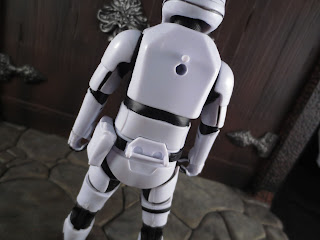 * It's tough to see it in these pictures but this figure has amazingly white, shiny armor. It looks really crisp and shiny, as you can imagine perfectly cared for First Order armor would. The black paint work is pretty neat and crisp for the most part, too. 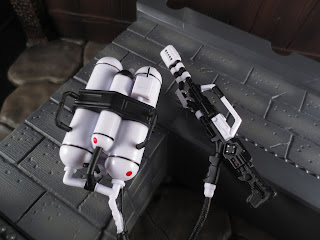 * Hasbro did an awesome job with the D-93 Incinerator Flamethrower! Looking at the backpack accessory next to a reference photo of it from the Visual Dictionary, I'm really impressed by how nearly every small detail, even the painted ones, is present here. 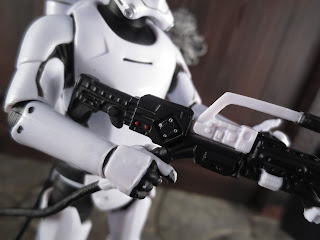 * Take a closer look at the flame projector. They're really been working to ensure that the weapons are as accurate as possible. Small paint apps like those on this weapon really deliver the quality and accuracy I expect from a Star Wars product. 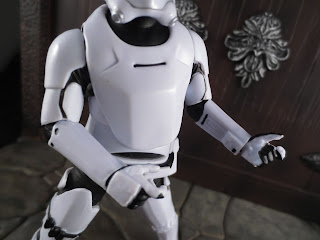 * The biggest problem I have with this figure is that he has some severely limited articulation on his elbows. I absolutely wish that Hasbro would go back to the double-hinged elbows they used for the Imperial and Republic era troopers. Giving this guy the opportunity to hold his weapon in a wider variety of poses would definitely have been ideal. 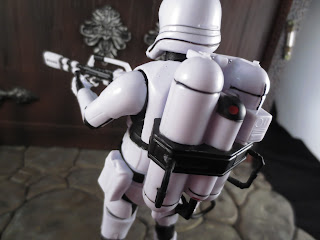 * The fuel tank pack is pretty large but it doesn't stay on the Flametrooper's back very securely. It's just a bit loose. Not in danger of just falling off or anything but if you're messing around with the figure it could easily fall off.

* Also, the two handles on the back of the tank do seem a bit brittle. Be careful with them as I could see them cracking fairly easily. 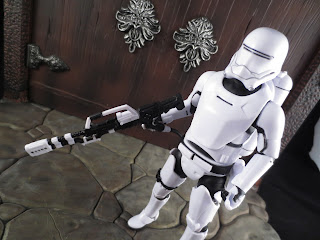 * I really wish that this guy came with some sort of flame attachment. The Flametrooper figure from the Clone Wars era came with some really cool fire effects and it looked amazing. I'd love to see Hasbro include some effect pieces with the Black Series figures and this would have been an amazing place to start. 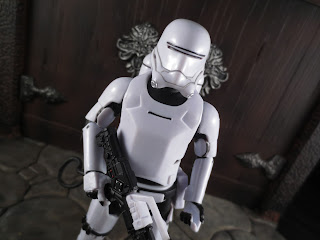 I love collecting the armored troopers of the Star Wars universe and the Flametrooper adds some nice some variety but he's not one of the best figures released. The flamethrower pack looks awesome but it's just not able to be fully utilized due to the limited articulation the elbows. Overall, I'm giving this guy a Good and a 1/2. He's fun and since he's packed two to a case he should be easier to find than some other figures in the line.


I haven't reviewed any other incarnation of the Flametroopers, but I have reviewed plenty of other figures from the Black Series, including: