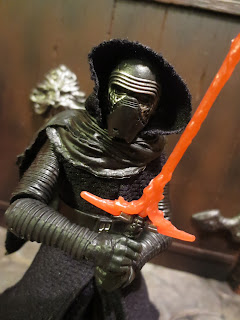 I've documented my Force Friday experience on the last episode of The Collection Agency podcast but I'm just now getting around to showing off my Force Friday haul (I've been really busy getting stuff ready for 31 Days of Toy Terror Returns beginning October 1st!). The first figure I snagged from the Toys 'R Us where I spent my Force Friday countdown was Kylo Ren. I imagine that this was the first figure everyone wanted as Kylo Ren just hits all of the design points that Star Wars fans love in their bad guys. Ever since seeing Kylo Ren ignite his fiery red lightsaber with a cross-guard last November when the first The Force Awakens trailer was released, nearly everyone has been enamored by this mysterious member of the Knights of Ren. While I won't spend much time with rumors and theories here, I am just itching to review this figure from Hasbro's newest incarnation of Star Wars: The Black Series (while the packaging is red and black, it doesn't explicitly say The Force Awakens on it; perhaps they'll use the same packaging for the next year or so for figures from all over the Star Wars universe. Ready for a closer look at Kylo Ren? Then join me after the break... 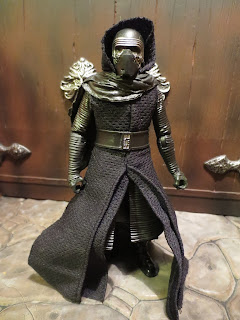 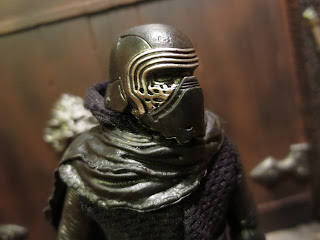 *If you're like me, the first thing you wanted to do was pull back Kylo Ren's hood to see what the back of his helmet looks like. And yes, it is flared like Darth Vader's. This definitely adds more fuel to the fire that Kylo Ren is a Darth Vader fanatic (perhaps because Vader is his grandfather?)  and gives him an appearance that seems to be a mixture of Vader and Darth Revan. 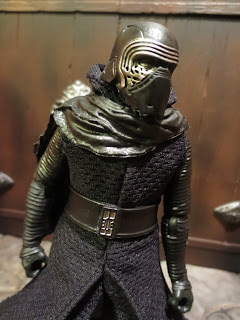 * One thing I do like about the look of the figure is how it manages to handle so many layers. I do like the look of cloth goods on action figures in smaller scales when done right and I think that, overall, Kylo Ren's does look quite nice. It really helps to sell him as a warrior wearing various layers of armor, a cloak, and a belt. It seems to match the character's film appearance pretty well, so that's always a plus. 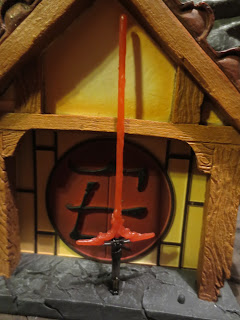 * For the most part, Kylo Ren's lightsaber looks amazing. It has a more uneven, rougher looking blade than we are accustomed to seeing, but it seems to match the film stills and trailer. The blade is nice and stiff and looks great in Kylo Ren's hands. 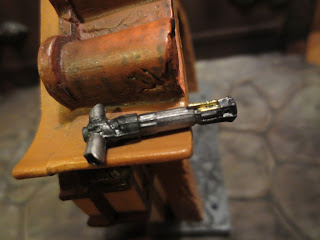 * The hilt looks great. It has some nice detail, quite a few paint applications, and some wear and tear. There's no way to attach it to Kylo Ren, but maybe he doesn't wear a lightsaber hanigng in his belt or anything like that in the film. We'll have to wait and see! 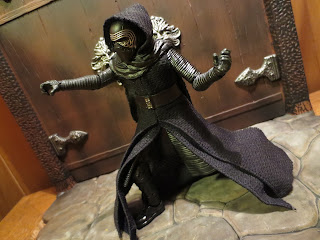 * Thanks to more actual fabric in his robe than plastic, Kylo Ren is quite well articulated. He's quite sturdy and feels like he could work just as well as a toy for kids as he does as a collectible for older collectors. Play around with him a bit and you'll get some fun poses. 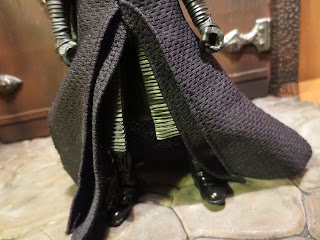 *As I'm looking at the figure, I kind of wish the inner robe was cloth and the outer robe was plastic. It seems like a better choice and one that would give more functionality. 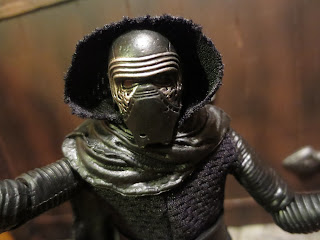 * While the previous The Black Series heads have all been removable, these new figures don't seem to have that same feature. One night while recording an episode of our previous podcast, The Confirmed Epic Podcast, Brad and I sad around goofing off and swapping up the Black Series heads on his figures. It was a fun feature and I hate to see it disappear here. 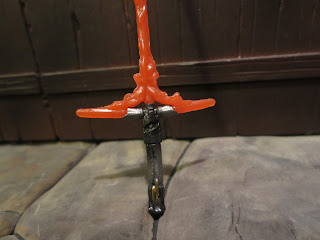 * One thing I don't like about the lightsaber blade is that you have to bend the blade to remove it. Since the main blade and the two cross-guard blades are connected for some reason, you have to bend the connecting blades to remove the saver blade. I don't know if Hasbro did this because Kylo Ren's blade looks like this in the film at some point or to prevent the figure from having two tiny removable blades. 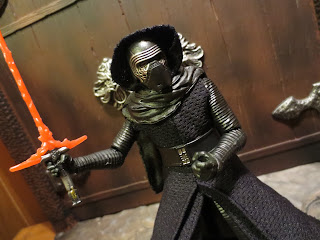 How crazy to be reviewing a Star Wars figure of a character I know very, very little about! I'm literally getting antsy as I'm so, so excited for the film and playing around with this figure just makes me more anxious for The Force Awakens! Based only on film stills, the trailer, and a few written sources, this seems like a pretty nice figure of one of the antagonists from the upcoming film. He's definitely the current most recognizable villain (although Captain Phasma is giving him a run for his money) and he's a Good and a 1/2 toy on his own. There's a K-Mart exclusive Kylo Ren coming out soon with a seemingly more accurate lightsaber so, if you can wait a bit, that one might be the one to pickup.

I've reviewed plenty of the 6 inch Black Series figures, including: