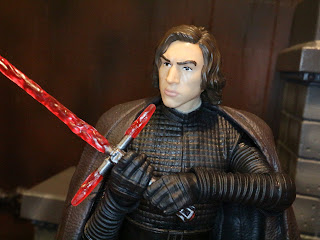 Today it's time for my first review of an action figure from Star Wars Episode VIII: The Last Jedi and it's Kylo Ren! From early pictures of this figure, I really though Kylo Ren was going to be the dud of the first series of figures since he didn't initially appear to look much different than the TFA version of the character except with the unhelmeted head. It turns out, though, that this figure offers up plenty of new sculpting and is actually rather impressive. Kylo Ren has become an incredibly popular character and I'm excited to see where his character arc goes in The Last Jedi. We're less than 3 1/2 months away, you know! Let's take a closer look at another of my Force Friday II finds after the break... 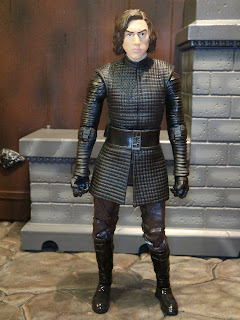 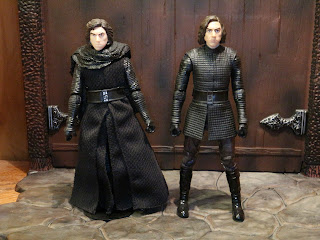 Here's a side by side comparison of the 2016 SDCC Kylo Ren (Unmasked) (on the left) and the new figure (on the right). The new figure has a shorter robe, no soft goods robe, and a completely new headsculpt. While the limbs are very similar, I believe they are all completely new sculpts as well. 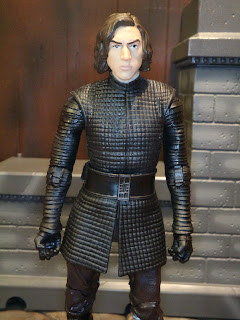 * I really like Kylo Ren's new costume. While I'm sure he still wears the helmet from time to time, this reminds me much more of Count Dooku's costume or perhaps even the concept costume for Anakin Skywalker in Episode III. It's still very Sith inspired, but less straight-up Darth Vaderish. Is Ben Solo just on the path to becoming his own man or is this intentionally a turn away from Vader's style? We'll have to wait and see. What is clearly visible now, though, is that this costume is really well sculpted. The textured details are all very visible and look impressive. The belt is now a sculpted part of the costume rather than the extra piece of the Episode VII figure, but it still looks pretty cool. 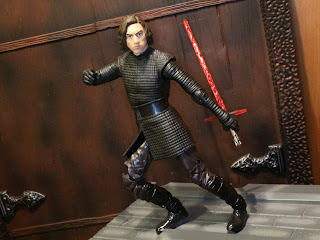 * Kylo Ren definitely has some improved articulation over the Episode VII based releases. Not only do the joints feel better designed with an increased range of motion but he also has an impressive mid-torso joint that allows for some impressive dueling poses. This guy is pure hand candy, no doubt about it. 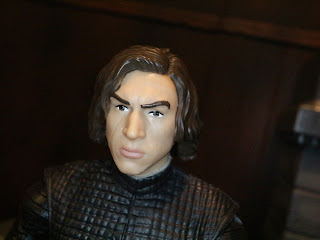 * The headsculpt on this guy is much better than on the previous releases. The paint work is cleaner and the head looks less waxy and toyish. Hasbro really seems to have stepped up their game here. Maybe they had more time to prepare for this film than they did for TFA? 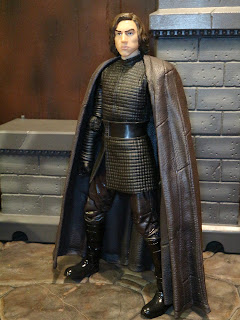 * Rather than a soft goods cloak, Kylo Ren is wearing a flexible plastic cloak that slips over his shoulders. I had suspicions about this piece, particularly after learning that the figure didn't use any soft goods pieces, but having it in hand I like it. It looks rather impressive, stays and place nicely, and gives the figure a unique addition of color; the cloak actually appears more brownish or maroon. It's slight, but it's there. 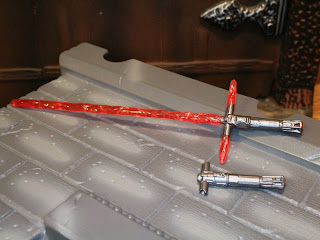 * As you probably expected, Kylo comes with both a lit version of his lightsaber and an unlit version. The blades on the lit version are not removable. The paintwork on the hilts of both sabers feature some minor detail work while the color of the blade itself is much richer than the TFA releases. 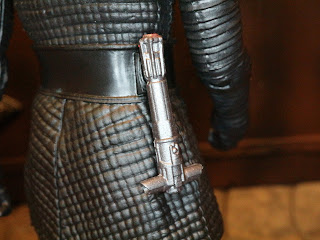 * The unlit saber hilt can plug into a small notch on Kylo Ren's belt. It's a cool little feature that I think is well worth pointing out. 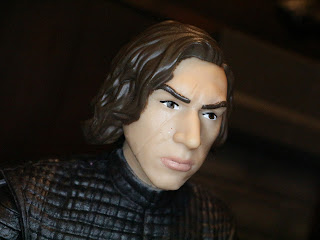 * Yes, Kylo Ren's scar was moved a bit for The Last Jedi for purely aesthetic reasons. That being said, I do think Hasbro downplayed the scar a bit too much on this figure. It's there but it is extremely faint. I would have liked a bit more of a noticeable scar to differentiate this headsculpt from previous releases. 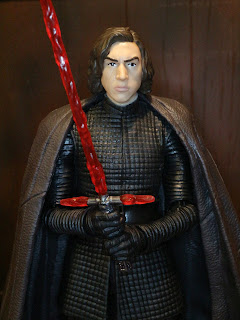 For a figure I expected to be rather ho-hum, Kylo Ren impressed me. He's not the most exciting release in the new The Last Jedi Black Series releases but he's certainly not unimpressive. The sculpting and paintwork is all on point, he's moderately well accessorized, and his articulation is much improved. While he doesn't have his famous helmet, who knows how often he will actually wear it in the new film? Maybe this is his default look? Kylo Ren is an impressive figure and one I feel confident giving a Great rating. There's quite a bit of new The Black Series stuff out on shelves right now, but don't skip over Han and Leia's son just because you already own the first one. You'd be missing out on a great figure!

If you're looking for more Kylo-Ren inspired products, check out my reviews of the standard Kylo Ren and the K-Mart exclusive Kylo Ren (Starkiller Base) set, as well as the SDCC 2016 Kylo Ren Unmasked. Of course, a miniature Kylo Ren also came with the Micro Machines First Order Star Destroyer playset. Oh, and there is the Micro Machines Kylo Ren Playcase, too!

If you're looking for more figures from The Black Series Phase III, check these out: