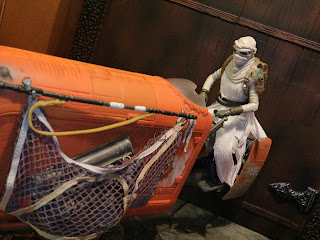 Force Friday II was kind of weird; while I am absolutely pumped for The Last Jedi, it feels like so many of the Black Series action figures released were for Episode VII and other films. Maz Kanata, General Leia Organa, Luke Skywalker, and Rey on her Speeder? All figures that Hasbro should have released alongside (or shortly) after The Force Awakens. I'm not sure if it's due to the fact that Hasbro is having to deal with Disney's bizarre overly zealous attitude towards secrecy or just because Hasbro is having to work around a film a year schedule, but it just seems really odd. Fortunately, when we're getting "delayed" product it seems to turn out pretty good, as is the case with Rey and her speeder. Rey's speeder was released alongside of Luke and his Landspeeder and while they're not the first vehicles in the Black Series, they're the first in around 2 years. Let's take a look at this incredible 2-pack after the break... 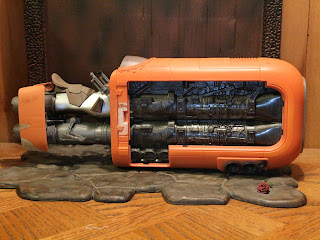 Accessories: Right side panel, cargo net, and a scrap heap 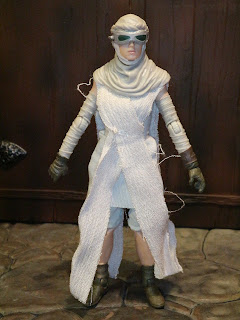 Non-Scalper Price: $60 dollars for the set. 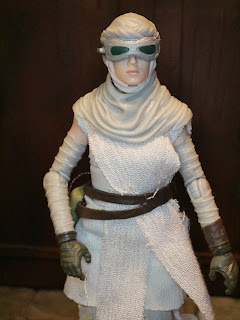 
* First up, let's talk about Rey. Not only does this Rey figure show off her look when she's scavenging through the desert but it's also a completely new figure from the figure released in 2015. Rather than all sculpted robes, this version of Rey has actual fabric swaths of cloth held in place by her belt. She also just has an overall better sculpt with cleaner paintwork. 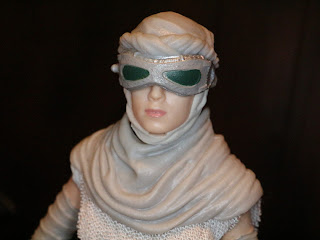 * I love Rey's headsculpt. While most of her head is covered by her hood and goggles, what is shown of her face looks to be one of the most accurate Daisy Ridley likenesses we've seen. Those goggles are also really slick. I love them! 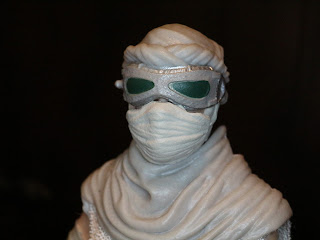 * To give her the full effect Rey includes a plastic mouth covering that fits over her lower face. It plugs in to a small gap between her chin and her headwrap and stays on pretty well. 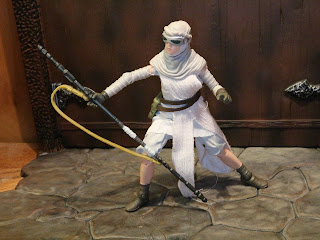 * Since Rey is completely a new figure, Hasbro had the chance to refine her articulation, too. The articulation scheme isn't any different than most other releases but it does seem like the joints all have a better range of motion. Rey looks great in battle with her staff or riding atop her speeder. 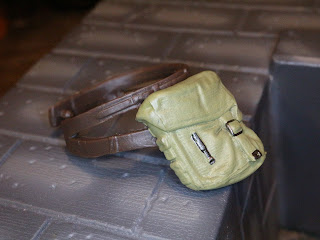 * Rey's belt with satchel is removable. The sculpt and paintwork look pretty impressive and help add to the overall realism of the figure. 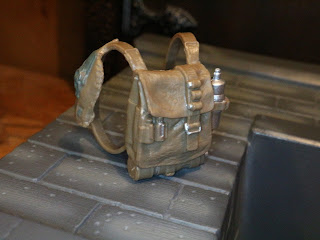 * Rey also includes her backpack. I had been hoping that some variant of Rey would include this piece and it's nice to finally have it. It's much better than the backpack that came with the Disney Elite Series Rey. The straps are much easier to use and the various bits and bobs on the backpack are far more detailed. 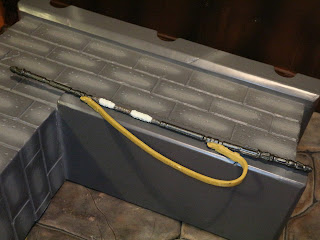 * Rey also includes her staff which is an improved sculpt over the version from the original figure. It's the same sculpt as the version that comes with the new Rey (Jedi Training) figure but has a slightly different paint scheme. 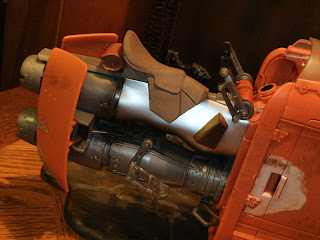 * Now it's finally time to get to the speeder itself. Hasbro did an excellent job capturing this vehicle in plastic there's enough detail and accuracy to make it a desirable collector's item while still retaining some cool features that also add a bit of playability to it, too. The cockpit features swiveling handlebars and foot pedals, hinged rear flaps, and quite a few detailed paint applications to help bring it to life. 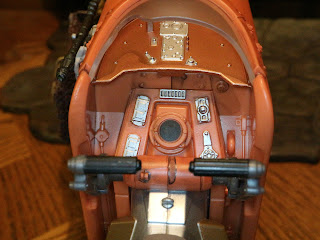 * Here's a look at the cockpit's control panel. Again, you can see lots of solid paint applications to show off all of the gadgets and such on the dashboard. 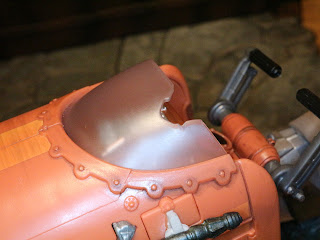 * I love the cracked windshield. Well, cracked isn't the right word; this thing is straight up missing a chunk out if it. 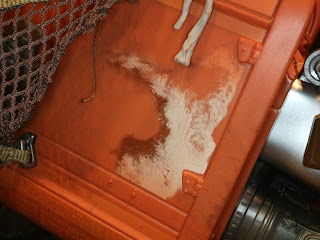 * There's a lot of paint weathering on the vehicle to add some character. The speeder was custom built by Rey from a variety of different parts, plus it's always used in the harsh climate and sandstorms of Jakku, so it makes sense that it wouldn't be the most pristine vehicle around. 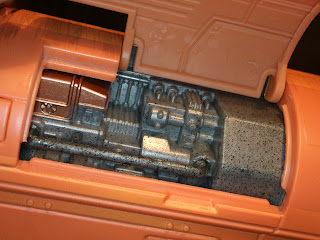 * At the top on the left side of the speeder is an opening hatch. Pull it open and you can actually see inside of the vehicle. While this isn't a "film accurate" feature, it goes a long way towards making this a much more fun item to have on display or mess around with. Stuff like this was always memorable on older vehicles so it's cool to allow any kids who might grow up playing with these toys a chance to act out some really cool scenarios. 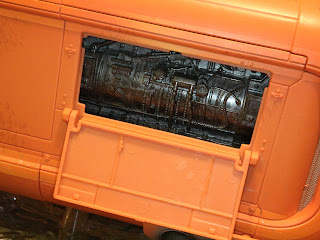 * Here's another panel on the right side, allowing you to peek into the inner workings of Rey's speeder. 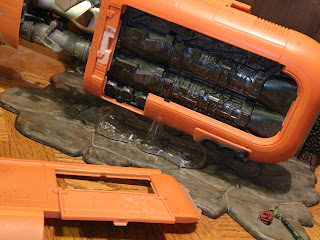 * Heck, even the entire right side of the speeder pops off as one solid piece. Now you can prepare some crazy level maintenance work. Groovy, indeed! 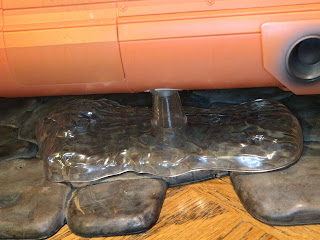 * Like Luke's Landspeeder, Rey's speeder also has a translucent plastic base that can plug into it to allow it to stand "hovering" off the ground. It's a balljoint so you can also pose the speeder as if it's in flight or in motion. 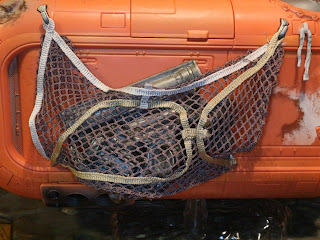 * On the left side is an actual net for storing junk. The net is an awesome piece and you can really hang it from the four clips on the side of the speefer. 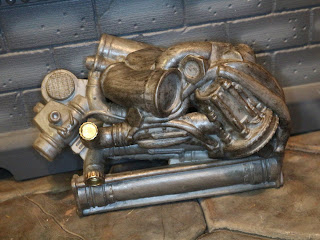 * The pile of junk inside the net is a separate piece. It is plugged into the side of the speeder but you can pull it out for use as an accessory or as a diorama element for one of Rey's scavenging missions. 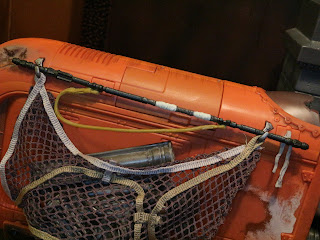 * Just like in the film, Rey's staff fits in the top clip on the left side. 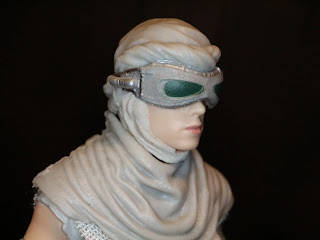 * I love Rey's headsculpt here but I am a bit disappointed that the goggles are not removable. It would have been great to have even more variety with this figure. 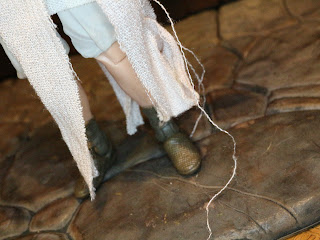 * I like the usage of soft goods for the swaths of cloth on Rey's costume but there are definitely some strands of material that are unraveling a bit. Maybe Hasbro needs to use a higher quality material? 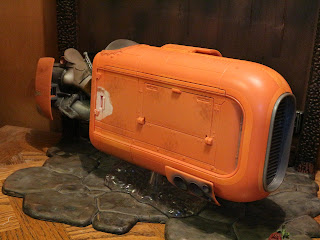 * Rey's speeder looks great overall but I do wish the plastic was a bit darker. It seems too light, almost too orange and not brown enough. The weathered paint apps look great but the overall body could stand to have a but more realistic look to it. 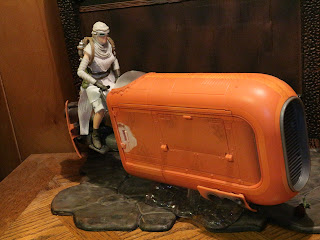 Rey's Speeder is another excellent vehicle in the Black Series. Considering you're paying $60 for the set (let's break that down to $20 for the figure and $40 for the vehicle), it seems like a pretty good buy). The Rey figure is a huge improvement over the previously released version and speeder is an impressive vehicle. It certainly could use a few more paint applications but, overall, I'm very happy with it. I love the added features that make it just a more fun and interactive vehicle. This is an Epic set and one of my favorite The Black Series pieces ever. While it feels like it should have been released n 2015, it's still a worthy addition to the collection in 2017.


I've only reviewed a couple of Rey figures, including Hasbro's Black Series Rey (Jakku) & BB-8, the K-Mart exclusive Rey (Starkiller Base) and Rey (Jedi Training).  I've also checked out the Micro Machines Speeder Chase set that includes a micro Rey on her Speeder.

If you're looking for other Star Wars: The Black Series figures from Phase III, check out the following: