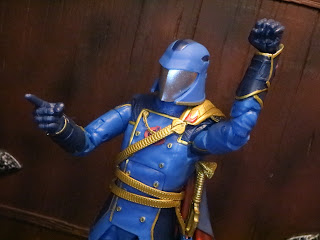 Since this is the last week of January I'm on a mad dash to wrap up my reviews of 2020 action figure releases and today I'm looking at the last G.I. Joe Classified Series figure I have for 2020: The Regal Variant of Cobra Commander. There's one other G.I. Joe Classified Series figure I haven't reviewed from 2020 yet, the Snake Supreme Cobra Commander HasCon exclusive, but my order for that is still coming. I got my order on the regular day of sale for the figure and thus I'm getting one of the second batch figures. This version of Cobra Commander is a straight up repaint of the standard series 2 Cobra Commander which I reviewed back in October. The Regal variant was sold as a Hasbro Pulse exclusive though a timed preorder and he started shipping out in December. Some folks are very tied to the more brightly colored blue outfit of the vintage Cobra Commander v1 figure so this was a chance to offer up a repaint that definitely has its fans. It's still a pretty fantastic looking figure, too, and while I really hope the Classified Series doesn't become flooded by repaints, this one struck my fancy. Let's check out the Regal variant of Cobra Commander after the break... 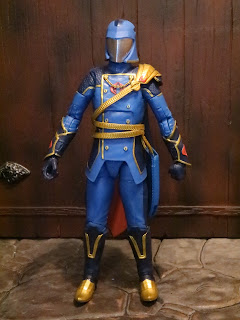 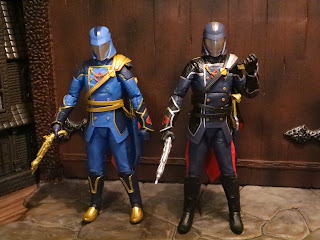 Comparison:
* The Regal variant is on the left while the standard Cobra Commander is on the right. Since they're the same figure with different paint schemes, I get to reuse most of my original review. Pretty cool, right? 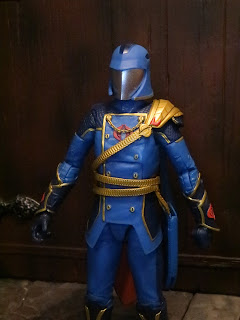 The Positives:
* Cobra Commander looks fantastic. The light blue is really does look pretty nice with the gold and dark blue highlights. I'm not that I think this version is more regal than the standard figure but I see what they mean with the gold highlights. It seems a bit more ceremonial and Cobra Commander definitely seems all about pageantry. The sculpt is excellent and there are so many cool little details you might miss at a first glance. His cape, belt, and the bandolier across his chest are separate pieces but they're not removable. They stay in place perfectly, though, and really give Cobra Commander a very classic, ornamental military look to him. The paintwork is excellent, too, with hardly any slop. Everything looks seriously crisp and perfect. 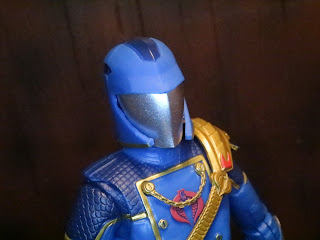 * Cobra Commander is wearing his traditional chrome visor and battle helmet combo. It looks about how you'd expect though there are some nice design elements here such as the shape of the edges of the helmet around the visor. It really gives a snake-like appearance. The details on this one are dark blue. Cobra Commander had a lot of tech built into his helmet in the Marvel Comics series, and I imagine he has even more now. He's probably streaming WandaVision in there while we're talking about him. 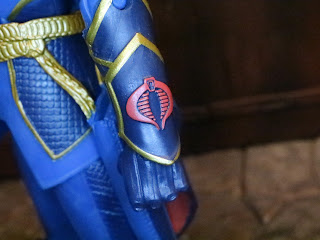 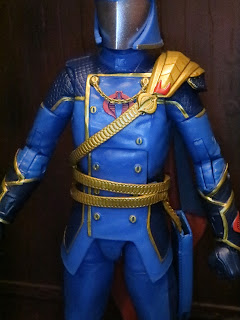 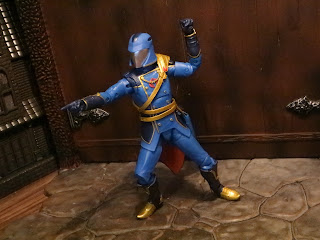 * Cobra Commander is a figure I certainly liked when I got him but it wasn't until I really started photographing him and posing him for the camera that I realized how exceptional he really is. I feel the same about this variant. His articulation is so smooth and every pose felt so natural. He's a wonderfully expressive figure and is as durable and well articulated as every other figure in the line. 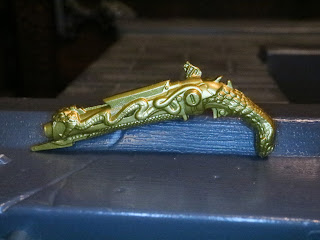 * Cobra Commander's primary weapon appears to be a very ornate laser pistol, now molded in gold. It's very different from his classic "hairdryer" styled laser gun (which comes with the Snake Supreme Cobra Commander) but it's still a fantastic looking accessory. The detail on this great! I love the serpent designs down the sides of the pistol. In the videogame G.I. Joe: Operation Blackout this is a laser pistol (like nearly everything else in the line) so the resemblance to an antique flintlock pistol is just a design choice. 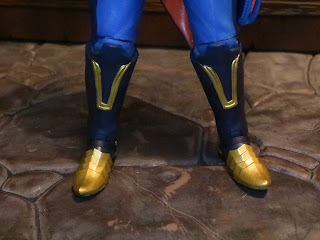 * I mentioned Cobra Commander's boots in my review of the original figure but I didn't specifically point out how cool they were. They kind of have a medieval armored look to them and the Regal variant actually gives the armor a gold paint app to really draw attention to them. Nice! 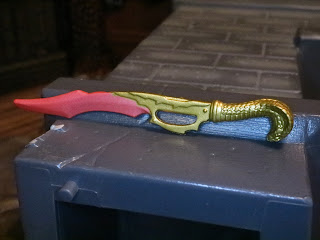 * Cobra Commander's second weapon is a dagger with a king cobra for the head. Well, maybe it's more of a short sword than a dagger as it's pretty long. I like the hand guard in the middle, as I imagine it allows Cobra Commander to use this two handed in close quarters. This version has a wicked red blade! 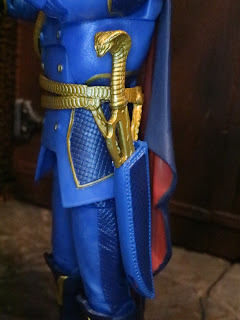 * Cobra Commander is sporting a sheathe for his sword that hangs down over his left hip. The sword fits inside quite nicely and having it hang there really completes the look of the figure. 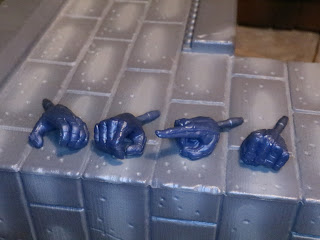 * Cobra Commander comes with 2 alternate hands, allowing you to give him some unique gestures when posing him. For his right hand you get a pointing finger and a pistol grip while for his left hand you get a fist and a wide, gesturing grip.

The Negatives:
* While you can use the gesturing grip to hold the handguard of Cobra Commander's sword, a standard left grip would have been very welcome. He really needs a way to hold his sword better. 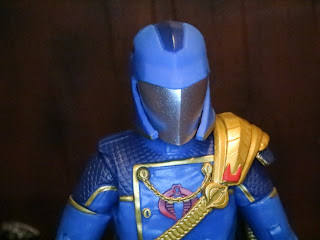 * Look closely at the tips of the helmet over Cobra Commander's visor and you can see that they're uneven. Mine are kind of bent out of shape and they came like that. I think over time I can get them set right but it's a minor annoyance still. 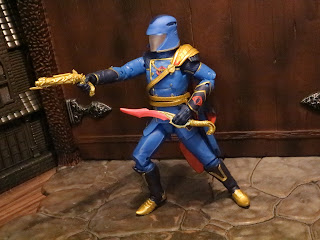 I didn't anticipate liking this variant as much as I do. In fact, I might even like the Regal variant Cobra Commander a bit better than the standard figure. I don't know, it's a tough call. He's an Epic figure, just like the original figure, but little details like the lighter blue outfit, the gold armor on the boots, and the red blade for his sword really impress me. Too many versions of the main characters have marred many previous G.I. Joe lines so I don't want to see that happen again but I still do really like this figure. He was only a Pulse exclusive so if you want one you'll have to start scouring the aftermarket or find someone who ordered a few more to arrange a trade.