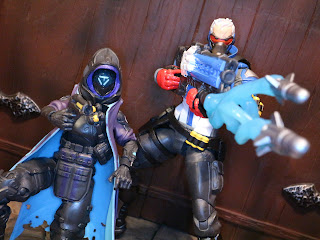 Sorry that it's been a few days since I posted a new review! Something pretty cool arrived in the mail this weekend and it's been keeping me busy. I'll be showing it off shortly but today I'm going to be checking out one of the 2-packs from Hasbro's Overwatch Ultimates line: Ana (Shrike) and Soldier: 76. As I said in my review of Sombra, I really don't know that much about Overwatch. I'm familiar with it but I've never played it nor have I read any of the tie-in comics. I really just dig the character designs and I like the product Hasbro has put out. This set includes two completely unique action figures. The Overwatch characters have multiple different "skins" they can wear which usually seem to be just new color schemes but some, like Ana's, feature different elements such as the Tron-like helmet seen here. Let's check out Ana and Soldier: 76 after the break... 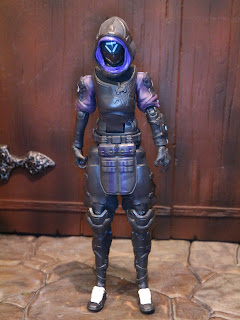 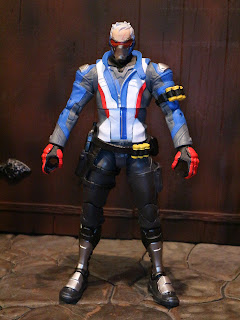 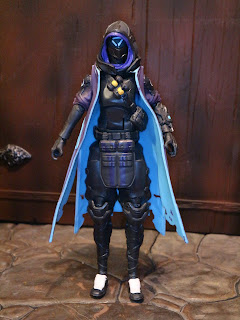 * This version of Ana Amari, a 60-year old Egyptian sharpshooter, is clad in her "Shrike" skin. While her regular costume doesn't have her face covered, the Shrike costume features an armored helmet. The costume is really cool with lots of complex details such as multiple belts, armored knee pads, and a brilliant black, purple, and teal color scheme. The bandolier holding her Biotic Grenades is also pretty cool. The bandolier is removable, though the grenades are not. 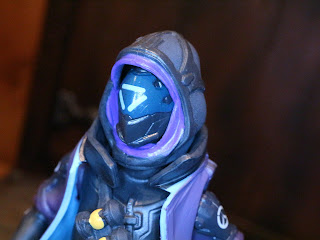 * The armored helmet makes Ana seem quite mysterious and somewhat robotic. The hood cannot be removed easily but it does fairly realistically cover the helmet. It's a cool look that reminds me of a Star Wars bounty hunter's costume for some reason. 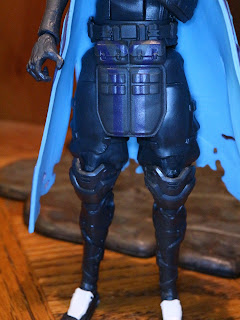 * So far there doesn't seem to be any reuse in this line, meaning that each figure has lots of unique detail. being a sharpshooter/ sniper, Ana has armored knee pads and a large belt that may have armored panels, or it may just have lots of pockets for carrying her various darts and such. 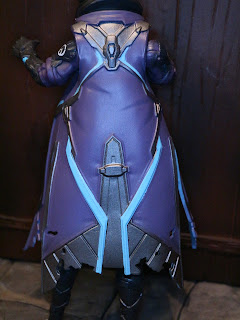 * Ana's coat is really cool. It is removable (although the sleeves are part of the arm sculpt) and it has some cool coloring as well as sculpted damage. There is some messy paintwork on some of the details but, overall, it's quite slick. 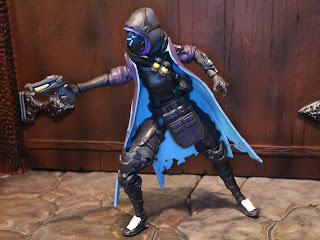 * For the most part the articulation is excellent. It might not be as good as Star Wars: The Black Series or some Marvel Legends figures yet but it's definitely in the same league. These are high quality, well articulated figures that feel sturdy and made for play and display. The range of motion could be improved in a few places but these are streets ahead of what most other mass market companies are putting out. 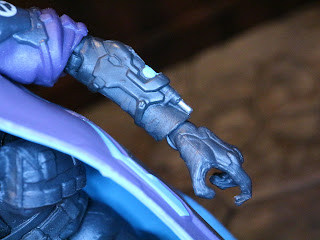 * What's this cool device on Ana's arm? This might be her Nano Boost device, a dart launcher that boosts the stats of her teammates. I'd rather it just be a backup weapon that Ana can pull out at a moment's notice but I imagine fans of the series will readily identify it. 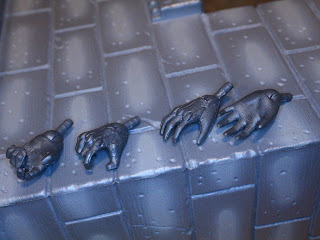 * Hasbro has given most of the figures in this series extra hands that swap out easily. Ana comes with two pistol grip hands and two open palms. 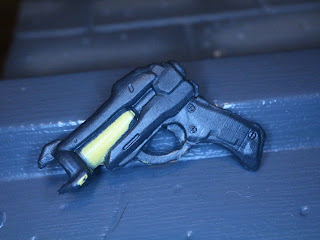 * I believe this is intended to be a pistol for Ana. There isn't anything that specifically identifies this as her weapon, but I think it's a sidearm she carries that can fire a sleep dart. It's got a cool look to it and even has a couple of paint hits. 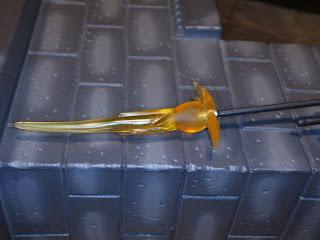 * Ana's primary weapon is a dart firing rifle. It's... well, it's disappointing. What is pretty cool is the blast effect that fits on the end of the rifle. It's molded in translucent plastic and adds a very dynamic feel when displaying the figure. 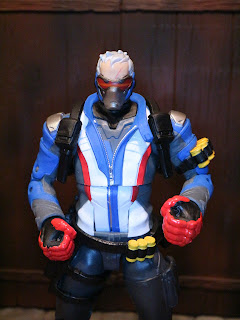 * Soldier: 76 is really John Francis "Jack" Morrison, a 50-something American soldier and vigilante. Soldier: 76 looks like a pretty large, tough guy. He's sporting red, white, and blue but he's wearing a mixture of tactical gar and outdoor athletic wear. His jacket is really quite colorful, giving him an unusual appearance for a character of this sort. Soldier: 76 has multiple different "skins" but this is his standard look. 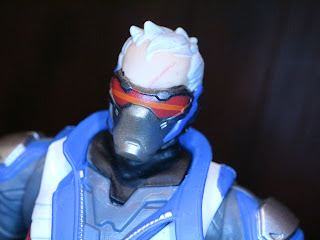 * The headsculpt is great. While his face is hidden behind his Tactical Visor (which looks pretty cool), his white hair is clearly visible. So is a pretty long and nasty scar on his face. 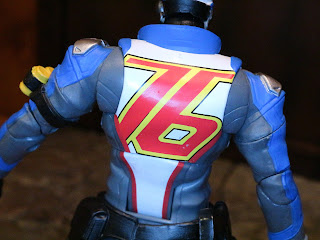 * On the back of his jacket is a bright "76" showing off his pride loud and proud. Honestly, I'm not really sure what the 76 refers to. Jack's an enhances super soldier or something, so maybe this is his designation from that project? The printing on this is quite sharp and colorful. 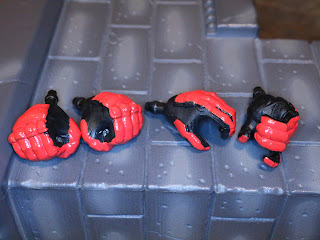 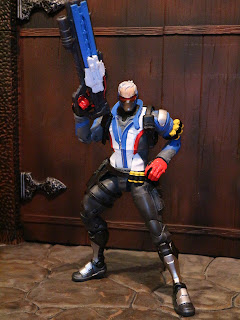 * Throwing in double hinged elbows, Soldier:76 has some of the best articulation in the line. He looks cool, feel sturdy, and can easily hold his weapon with both hands. 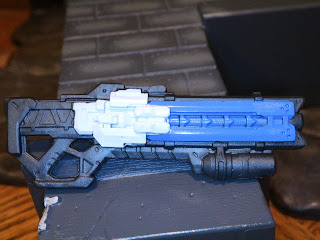 * Soldier: 76's main weapon is the Heavy Pulse Rifle. This is a cool, boxy, futuristic energy rifle that looks like a Nerf blaster of sorts. The paint applications on it really help to tie it in with Jack's colorful look and to help it stand out from the pack. 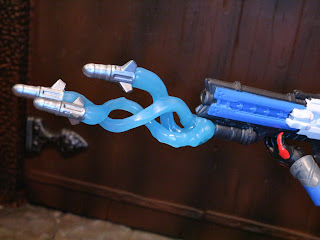 * The coolest part of the figure might be these Helix Rockets that "launch" from the bottom of Soldier: 76's rifle. The painted rockets are actually attached to two blue "swirly" plastic trails. They plug into the bottom of the Heavy Pulse Rifle and again offer a really dynamic way of displaying the figure. They look really cool "flying" through the air. 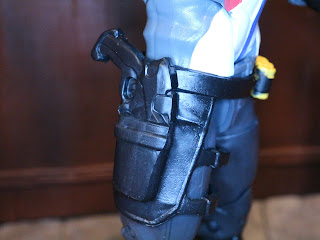 * Soldier: 76 has a pistol on his right hip but guess what? It's not removable. Not. Removable. What the heck? Seriously, what is this? 1999? There is no excuse for Hasbro to make a permanently attached sidearm in this day and age. This has been one of my biggest action figure pet peeves for years! 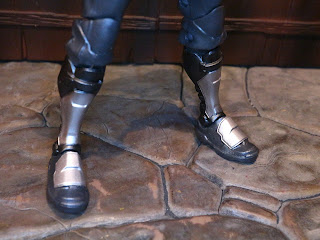 * Notice anything funny? It turns out that my Soldier: 76 has two right feet. Yup. He can't dance/ emote now, although that might be more of a Fortnite thing. I'm not sure. 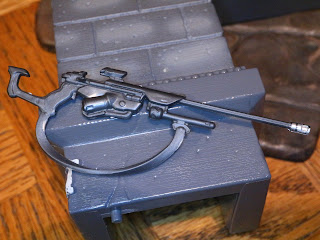 * Ana's Biotic Rifle is really disappointing. The plastic quality feels very cheap and the handle is so large that the figure can't really hold it in her hands. 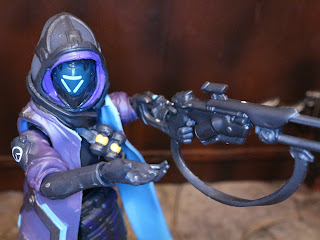 * Even worse, there really isn't any good way to pose Ana in a passable looking firing pose. Her elbow joints have a disappointing range of motion and she can't really do anything decent looking with the weapon. 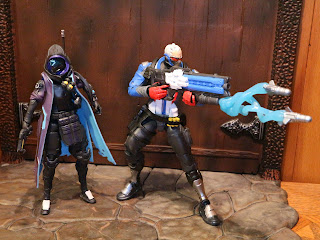 While both of these figures have a couple of flaws, they also have a lot of really, really cool stuff, too. Hasbro has done a nice job with these and has done a great job of making accurate figures with fun accessories. These are fun, durable, and well worth checking out even if you're not at all familiar with the game. You may want to shop around for this set, though, as the price tends to vary. I've seen this for close to $40 at places like Hasbro Pule, Amazon, and Wal-Mart while other stores, such as GameStop, have been selling these for around $50 dollars. GameStop has been holding some decent salesm though, so check around. This is still a Great set and worth checking out if you find it for retail.

These are the first figures of Ana Amari and Soldier: 76 that I've reviewed. For more figures from Overwatch Ultimates, check out the following:
Sombra
Posted by Barbecue17 at 6/03/2019