Wrapping Up 2020: Rey (Dark Side Vision) from Star Wars: The Black Series Phase IV by Hasbro 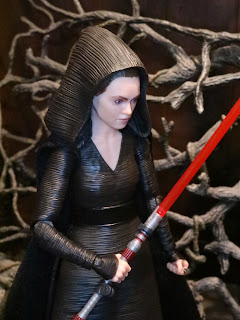 Hasbro launched Phase IV of Star Wars: The Black Series in mid-2020 and, so far out of over 30 releases, only one figure is based on one of the Disney Era films: Dark Side Vision Rey. There are some figures I really want to see from some of those films but this seems to be a sign about how Hasbro (and perhaps even Disney) will treat those films going forward. Despite the Dark Side Vision of Rey being fairly prominent in the trailers for The Rise of Skywalker she didn't factor into the movie much at all, getting only about as much screen time as Darth Vader with Luke's face under the helmet got on Dagobah. Still, this seemed like it had the potential to be a really cool figure. While I didn't ultimately love Rey's story arc, I do still like Rey and I absolutely think Daisy Ridley's portrayal of her is one of the high points of the Sequel Trilogy. Having a Sith version of Rey, even if it was just a "what if?" kind of thing seemed like it would make for a cool figure. How did she turn out? Let's find out after the break... 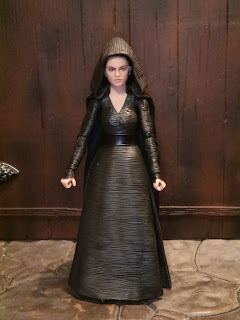 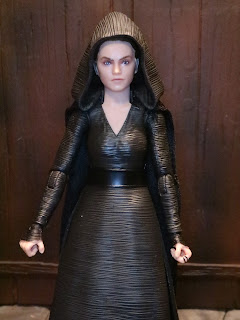 The Positives:
* When it comes just down to looks, Rey (Dark Side Vision) is a pretty fantastic looking figure. Rey's Sith robes are very nicely detailed with a unique texture that adds a needed touch to what is otherwise a rather simple, classic look. As far as I can recall, this is the first female Dark Sider in the Black Series so she definitely adds some welcome variety to that subset of figures. Rey's lower robe and her hood are solid plastic piece (we'll get to those in a minute) and, visually, they give her a very nice silhouette that captures the look you'd expect from a Sith warrior. 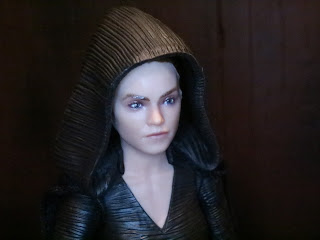 * In person Rey's headsculpt looks quite good. It's tough to photograph just right due to the way it mostly sits under the hood but it's definitely a paler, sterner expression than we've seen on previous Rey figures. She does have her hair pulled back, but it's all hidden underneath the hood. I really expected Hasbro to go with a headsculpt that showed off Rey's sharpened teeth or include an alternate portrait, but they went with the more standard portrait you see here. 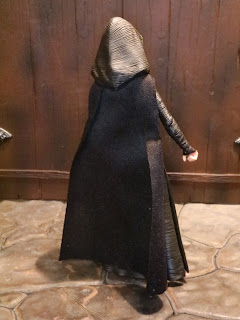 * When dealing with 1/12th scale figures, the best mixture for robes and capes and such seems to be a mixture of soft goods and sculpted pieces. While Rey's hood and skirt are sculpted, her cape is made from fabric. It hangs nicely and keeps the cape from making her too much of a "salt  shaker" figure. 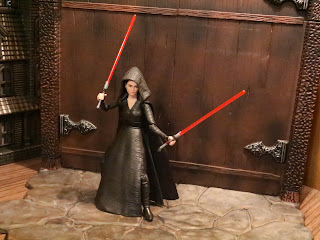 Rey actually has all of the articulation you'd expect from a current Black Series figure including the "butterfly" joints in her shoulders and swivel/hinge elbows with an incredible range of motion. Her legs are fully articulated as well and they can be used a bit due to the cuts in the sides of her robes. 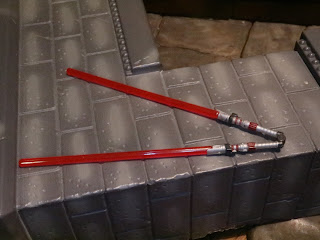 * Rey's Dark Side lightsaber is a double bladed saber that has a hinge in the middle, allowing for easier storage. Hasbro did a great job of recreating this lightsaber, giving it a functioning hinge that can separate into two separate blades as well. I'm not sure if that's intentional or not but it's a cool feature. The detail is really nice on the hilts with quite a few paint applications. 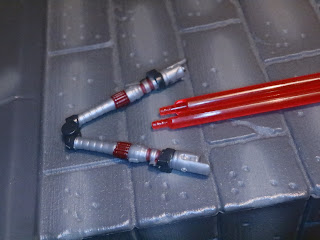 * The pegs for the removable blades seem much sturdier than those of most other lightsabers in the line and they stay in the hilts securely. 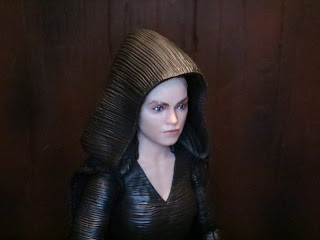 The Negatives:
* I think the decision to give Rey a plastic hood was a good one. It should definitely have been removable, though, as it severely limits the figure. With the ability to freely remove the hood I think this would be a much more desirable figure. 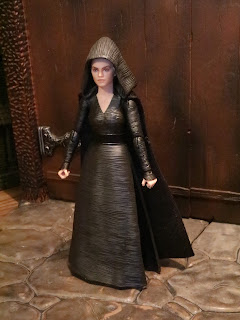 * The same goes for Rey's robes. The upper part of Rey's body has fantastic articulation but the lower body is very restricted by the plastic robes. Yes, there is a cut on each side of the robe, but it still isn't quite enough to give her the range of motion you'd hope for. A softer lower robe, maybe even soft goods, would really have improved Rey. If you're just keeping Rey on the shelf you'll be fine but if you pose your figures or mess around with them you'll wish she was a bit more dynamic. 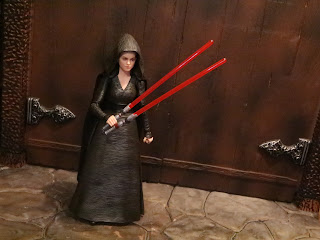 While she's a very scene specific figure, I really think Rey (Dark Side Vision) could have been one of the best Black Series figures of 2020 with a bit ore thought put into her functionality. Maybe if Hasbro had tossed in an alternate head with Rey showing off her sharp teeth as well. With what we've got she's still quite nice but not as fun or functional as she could have been. I really wish we'd gotten a soft goods lower robe (or maybe a blended robe) and a removable hood to allow her excellent articulation to shine. She's a Good and a 1/2 figure who deserved to be a bit better, though.

Where's Rey? Here she is! I've reviewed a bunch of Rey figures including Hasbro's Black Series Rey (Jakku) & BB-8, the K-Mart exclusive Rey (Starkiller Base), Rey with her Speeder, Rey (Jedi Training), Rey (Island Journey), the Toys R Us exclusive Rey (Jedi Training) on Crait, Rey & D-O, and the Vintage Collection Rey (Jakku). I've also checked out the Micro Machines Speeder Chase set that includes a micro Rey on her Speeder and the Micro Force Rey from the Advent Calendar.