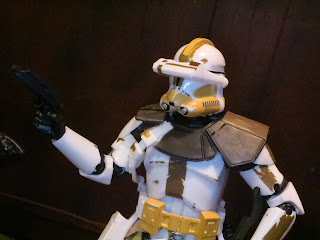 I recently found Commander Bly who was the only figure from the most Black Series set I was looking for (I'm skipping the Sith Jet Trooper), so let's take a few minutes to review him. Clone Commander Bly, officially known as CC-0252, appears in a few Clone Wars episodes, some Legends comic books, and in the film Revenge of the Sith where he receives Order 66 on Felucia and assassinates Aayla Secura at the Emperor's command. The clones have been extremely popular among Star Wars collectors and Hasbro has done a pretty admirable job of mixing them into the Black Series. They haven't flooded the line with them but they do keep them coming at a steady pace to keep interest. Let's check out Clone Commander Bly after the break and see if he is another worthy addition to the ranks... 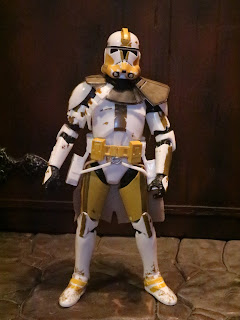 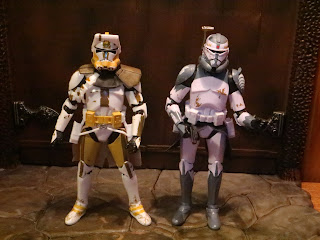 * The clones overall share a lot basic parts and Clone Commander Bly, on the left, is no different. On the right is Clone Commander Wolff, another recent Clone Commander with a mixture of new and used parts. For Bly, his new parts seem to be his helmet, pauldrons, bandolier, and his belt/ holsters. 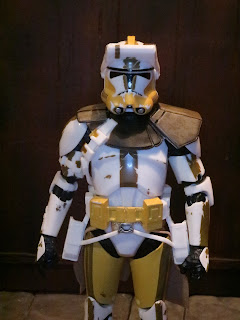 * Commander Bly is an awesome looking figure. Yeah, he's another clone decked out in white armor but he has so many personalized touches and a unique brown and yellow paint job to help differentiate him from his brothers. The paint work is excellent on this guy and his leathery looking pauldrons are fantastic. He also has a bandolier, too. 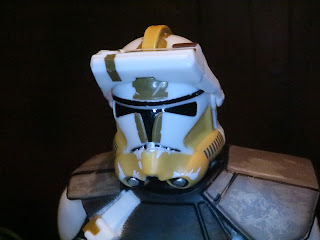 * Commander Bly's helmet is awesome looking although it is the subject of a running change: The first release helmet (seen here) doesn't have the brown stripe running all the way down the helmet. Apparently a newer version has the brown stripe all the way down. Regardless, I think the helmet looks pretty good and the missing stripe doesn't bother me too much. I don't know that I'd re-buy this guy just for the corrected stripe, y'know? 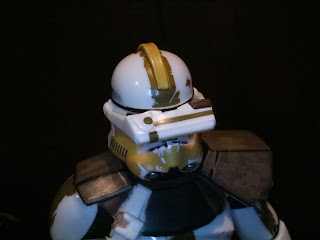 * The hinged visor is excellent and really makes Bly a lot of fun to mess around with. It's quite cool how it simply swings down over the visor of his helmet to offer up more viewing options for him. It comes packed attached to the figure and there really isn't any need to remove it, though it comes off if you want to for any reason. 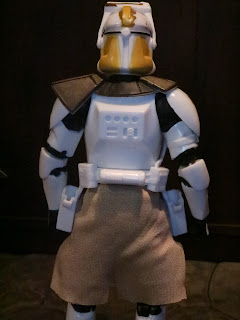 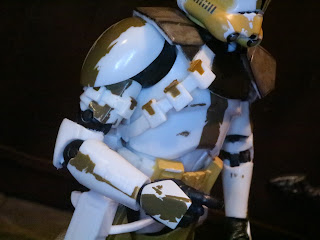 * The brown painted stripes on Bly's armor just look really, really cool. I love how they actually look weathered and worn! This guy has some really nice paintwork. 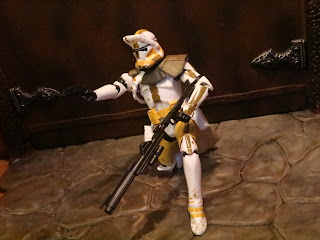 *  Commander Bly utilizes most of the body of a standard Clone Trooper figure, meaning he's durable and nicely articulated. His hips are restricted a bit by his holsters but it's not terribly limiting. He's a lot of fun to pose and display alongside the other clones we've received so far. 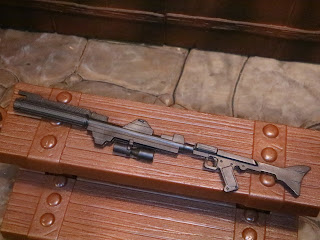 * Like nearly every clone released Commander Bly comes with a DC-15A blaster rifle. It's a great sculpt with a lot of detail but, sadly, it's missing the paint applications that so many of the blasters included with other clones have featured. 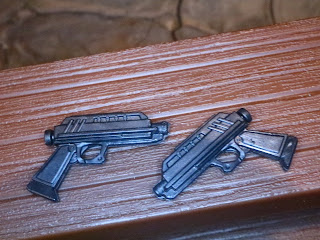 * Bly also includes his two DC-17 blaster pistols. They look great, feature crisp sculpting, and fit easily in the holsters on his belt. 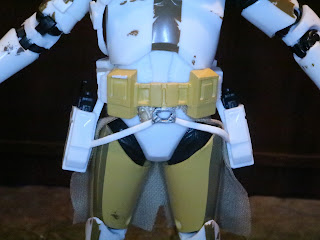 * Here's a shot of the new holsters and his belt. I believe this is a completely new piece and it looks great. The paint highlights really add a bit more to the belt while the holsters hold his pistols perfectly. 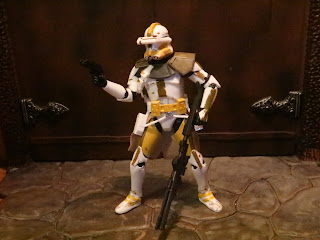 Commander Bly is another Epic clone trooper. The clones have been consistently excellent in the Black Series and Bly goes above and beyond in taking the great base body and building on it. He's got new pauldrons, new holsters, three firearms, a new helmet with a working visor, and an excellent paint job. Clone Commander Bly seems like the most difficult figure to find in the most recent series and he might be the best of the series too (I really like Count Dook too, though). What do you think? Commander Bly, Count Dooku, Zorii Bliss, the Sith Jet Trooper, or the Knight of Ren? Who is your favorite from this series?