Wrapping Up 2020: Heavy Infantry Mandalorian from Star Wars: The Credit Collection by Hasbro 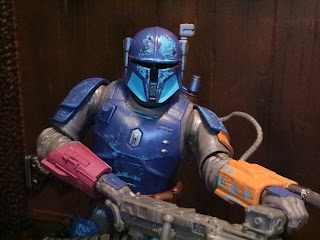 The Heavy Infantry Mandalorian, real name Paz Vizsla (voiced by John Favreau), is the fifth and final figure of Hasbro's 2020 Star Wars: The Credit Collection. He's a Best Buy exclusive and he just arrived in my mailbox less than a week ago even though I ordered him in early December. Interestingly, the standard Paz Vizsla was part of my wrap-up of 2019 who I reviewed in early 2020 as well. He was also a Best Buy exclusive. Hasbro has treated Paz Vizsla as a deluxe figure (which seems like they're really stretching the concept of a deluxe figure) and so this one comes on a vintage Kenner styled card, like the other figures in the set, but it's quite a bit wider. Paz Vizsla is really just a repaint of the previous figure and, oddly, he's not all that different from the first release. Still, I was up for another Mandalorian and I got a good deal on this guy from Best Buy.com since his package was damaged. Want to check him out? Then join me after the break... 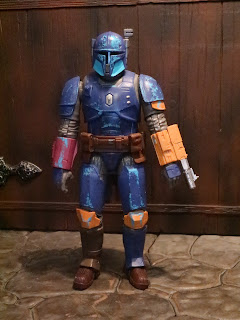 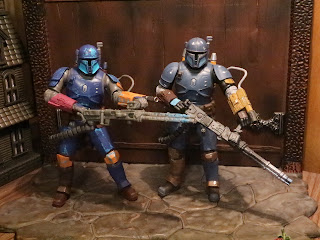 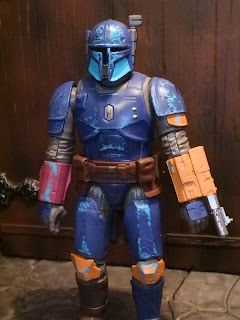 * This guy is as awesome as he was last year sculpt-wise, although the paint details are different. There are fewer "fine" details but more colors that put me in the mind of the Kenner Boba Fett. He's quite cool, though, and I like the light blue splashes of color on him. 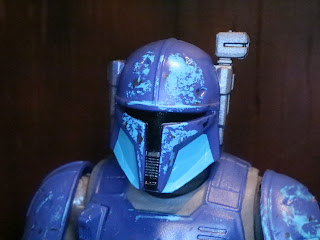 * The helmet's really quite similar to the previous figure but with more of the blue splash effect. He's got a great helmet with lots of cool gadgets on it for sure. 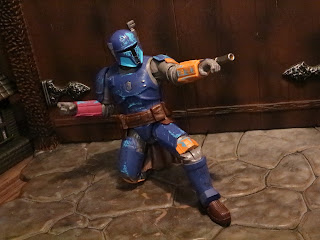 * Despite being tall, bulky, and covered in armor, the Heavy Infantry Mandalorian is incredibly well articulated. Not only do his joints have a great range of motion but he also has the lateral pectoral hinges, which allow for better two handed weapon holding poses and soft shoulders pads so that none of the shoulder articulation is sacrificed. 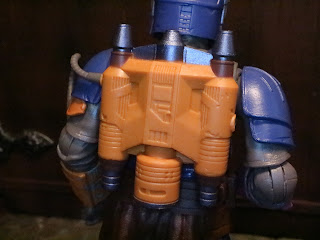 * Paz Vizla still includes his standard three accessories which all connect together. His jetpack is really awesome looking though it has fewer paint applications than the standard figure had. It fits very securely on his back and the grey fuel line connects to it (the fuel line runs to the flamethrower on his left forearm). 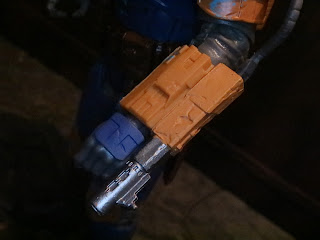 * He's also still packing his pretty large forearm mounted flamethrower. There are fewer paint details here, too, in order to capture the look of the concept art. I kind of wish he still had those details, to be honest, but it's still pretty gnarly. 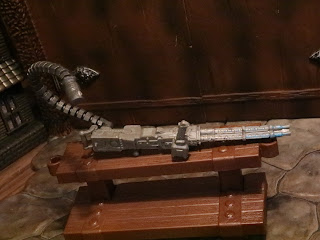 * Paz Vizla probably gets the designation of Heavy Infantry Mandalorian since he's toting around this massive heavy blaster cannon (which reminds me of Baze Malbus' cannon from Rogue One). The sculpt is excellent, the barrel of the gun has some interesting paint applications, the magazine that attaches to the jetpack is nice and flexible, and there is an articulated handle on the side that allows for the figure to hold it in different ways. 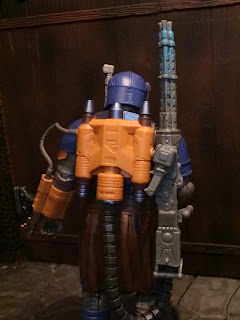 * Not only does Paz hold the cannon well but it can also store on the side of his jetpack, too. It looks pretty cool like this, don't you think? 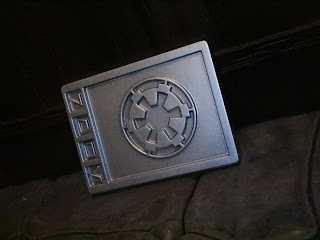 *  Since this is The Credit Collection each figure comes with an Imperial Credit. You can see them stacked on a table in this picture from the show. It looks like they're pretty accurately sized. The Credit is a simple plastic piece that meant to be sort of a prop replica rather than an accessory intended for use with the figure. Across the side of the credit you can see the Aurebesh characters that spell out ROWE. What's that mean? I can't find an answer anywhere! 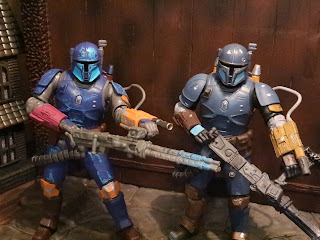 * While there are certainly differences in the colors, I really am not sure there was enough difference here to make the Heavy Infantry Mandalorian the best figure for inclusion in The Credit Collection. Then again, he's one of the few Mandalorian figures released so far so it was probably a matter of necessity. 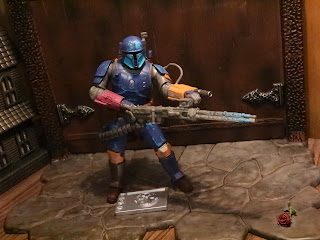 While I still like this figure I definitely don't think the Credit Collection version of Paz Vizsla is as good as last year's release. This is still a Great figure but you're paying an additional $5 bucks for less detailed paint applications and the Credit piece. Fortunately he's so cool and I love Mandalorians so much that I'm willing to do it just to have him hanging around on the shelf, adding a another member to the Tribe (you can pretend he's a rando Mando if you want). The Credit Collection was a cool idea and it definitely had some real gems in it but I hope going forward Hasbro gives the Mandalorian the action figure treatment it deserves.

So far the only other figure of Paz Vizsla I've reviewed is the Black Series Phase III Heavy Infantry Mandalorian.