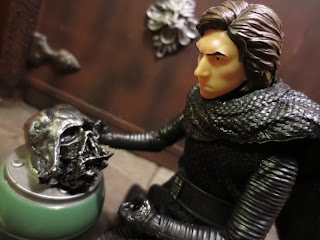 Today I'm looking at a figure I've been really excited for and that I'm thrilled to finally own: The unmasked Kylo Ren/ Ben Solo figure from Star Wars: The Black Series. I haven't written a Kylo Ren review since before The Force Awakens was released so let me take a second and say that I absolutely love Kylo Ren. Between him and Rey, I think we have two of the most interesting Star Wars characters to date. There's a ton going on with these two! My little one loves Kylo Ren as well (maybe I should be worried) and wants us both to dress up as Kylo Ren for Halloween. She wants to be little Kylo Ren and I'll be big Kylo Ren. I was Kylo Ren last year for Halloween (along with my wife as Rey and the little one as BB-8. Yes, before The Force Awakens even came out) and I'll happily dress like him again. I really went back and forth on picking this figure up as Hasbro exclusives are notoriously difficult to obtain. Furthermore, this figure is being released in September albeit without most of the extra accessories that make this set so appealing. I finally found one for a price I was comfortable paying and jumped in to capture Kylo Ren/ Ben Solo/ Matt the Radar Technician for my collection. How does he fair? Join me after the break... 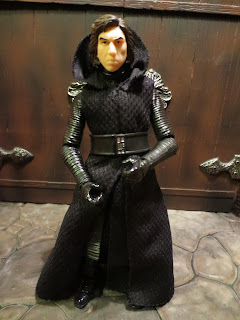 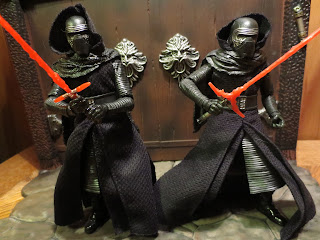 I've reviewed two previous Kylo Ren figures, both of which are quite similar to this one. If you're interested in the general body of this figure, the articulation, or the execution of the robe, check out those reviews here:

In this review I'll be focusing on what is new and different with this release. 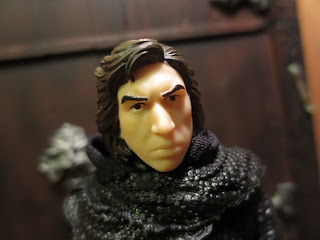 * I'm totally digging this unmasked Ben Solo portrait. While the paint is Hasbro level paintwork (not groundbreaking or anything) the sculpt is killer: This is absolutely Adam Driver as Ben Solo/ Kylo Ren. I love the intense look on his face! 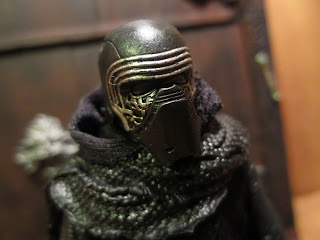 * The Kylo Ren helmet is not actually a helmet that fits over the Adam Driver headsculpt; it's actually a separate portrait. It swaps rather easily and looks really good. I actually think it's a retool of the previous releases as it looks a bit more detailed and accurate. The paintwork is much better, too. 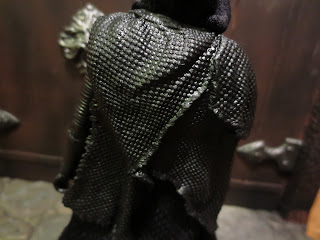 * Another upgrade to this figure is that Kylo Ren's outer plastic cloak has a much more textured sculpt that captures the difference in material between this piece of his wardrobe and his robe. Both version of Kylo Ren I've previously owned didn't have this more detailed cloak so I'm assuming it's either new to this release or one of the running changes Hasbro has introduced to this figure (similar to how the Jakku version of Rey now includes a lightsaber). 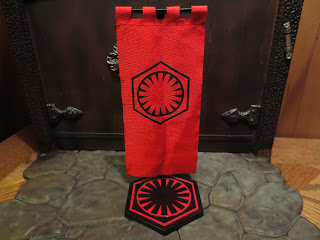 * The flashiest accessory that this figure comes from is a First Order banner with a First Order display stand. The bright red really stands out against the First Order troops and the fact that it's an actual cloth banner adds to the realism. I think General Hux would look particularly impressive standing here, wouldn't you agree? 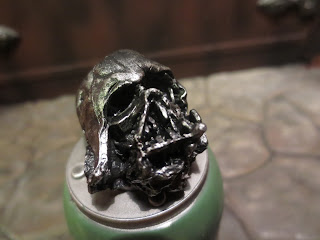 * I think this is the accessory selling this set to most fans and, let me tell you, it's every bit as cool as you've imagined. I love the charred look of this piece. The paintwork is quite good and does an excellent job of capturing the aging and damage this helmet has underwent. It's an incredible piece that I cannot believe has not made it into any figures yet up to this point. 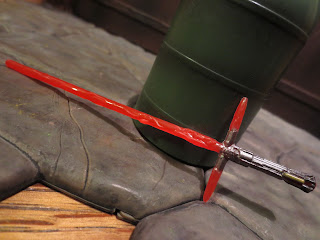 * Kylo Ren comes with his now infamous Lightsaber. The first version's saber featured a removable blade as well as a weird energy arc effect to it. Here, Hasbro gives us the standard Kylo Ren lightsaber without any removable parts. This saber is just for fighting and looking menacing. It also has an upgraded sculpt and paintjob. 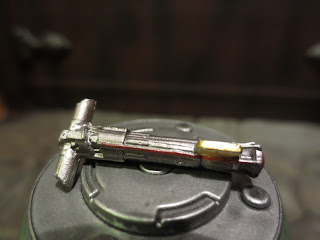 * Kylo Ren comes with an unlit lightsaber hilt. The K-Mart exclusive came with one too but this one has better paint applications and a larger tab on the side to help secure the lightsaber onto a belt. 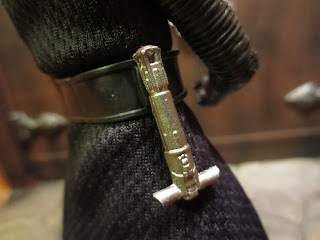 * Yes, yet another upgrade over both previously released Kylo Ren figures is that the new lightsaber hilt can plug into the side of the figure's belt. It stays quite well and gives you a place to store the hilt when displaying the figure. I'm digging this little extra for sure. 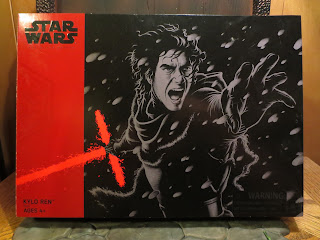 * This box is really nice looking. As you're probably away, I really have to like the packaging before I talk about it. I love this upper body drawing of Kylo Ren and how it meshes so well with the red and black color scheme of Phase III. The box is a 5 panel box with the front flap opening to reveal Kylo Ren and his accessories in a plastic, vacuformed tray. Inside the front panel is a picture of Vader's helmet, ominously lending it's presence to Kylo Ren's journey. 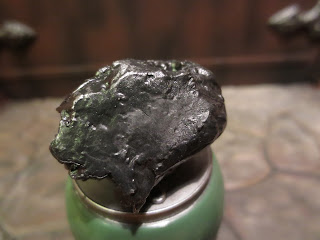 * The bottom of the charred Vader helmet looks really cool and probably authentic, but I kind of wish Hasbro had included some way for Ben Solo to hold the helmet. Both of Ben's hands are standard grips for the lightsaber and don't really allow him to hold the helmet in any way except if you tuck it into his arms like a football. 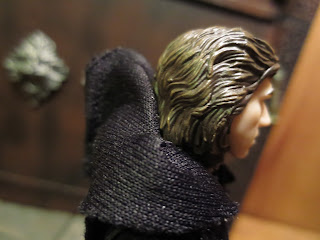 *  Kylo Ren's hood looks awesome when it's on him. It's cut and formed quite well and looks way better than most hoods in the 6 inch scale. Unfortunately, it's tough to find anything to do with the hood when you don't want to use it. It just doesn't fold down well. You can tuck it into the robe or place the plastic cloak over it but having the ability to fold it down using an internal wire or something in the stitching would have been a welcome addition. 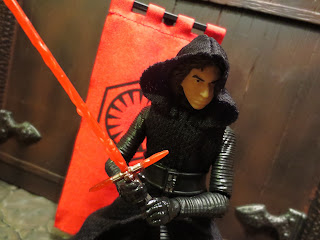 This is the Kylo Ren figure I've wanted since seeing the film and, despite Hasbro best efforts at making this guy nearly impossible to obtain, I now have him as part of my collection. He's an excellent figure with some truly impressive and inspired accessories. If you're picking up one Kylo Ren figure this one is probably the way to go. I don't feel any regret in paying a bit more to secure him and I feel completely justified in giving him an Epic rating. I'd love to see Hasbro begin offering a deluxe range of Black Series figures that need more portraits, accessories, and larger display pieces, and Kylo Ren would be a perfect template for how to execute that idea. 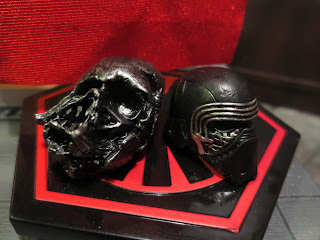 If you're interested in more reviews from Star Wars: The Black Series, check them out here: