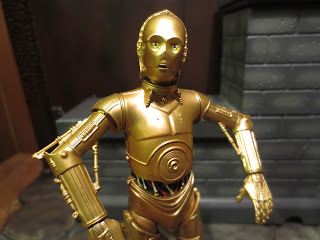 Today I'm doing another one of those reviews where I'm reviewing a figure that's extremely similar to another one, so I'm just showing you some new pictures, pointing out the new details, and directing you back to the original review. Over the past month or two Hasbro has released two different C-3PO figures: A Resistance Base version from The Force Awakens, available in the eighth series of Black Series Phase III figures, and a Walgreens exclusive classic C-3PO. My guess is that many collectors will opt for this classic one, which means it seems strange for an exclusive, right? Maybe Walgreen's decided they wanted the more recognizable version of the character? Anyways, let's take a look at this guy. I love him and I think you might, too. 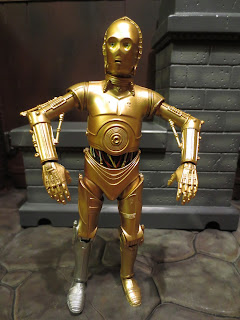 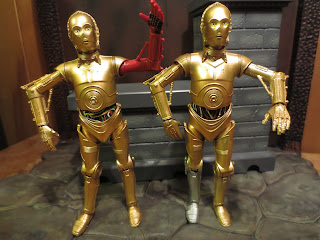 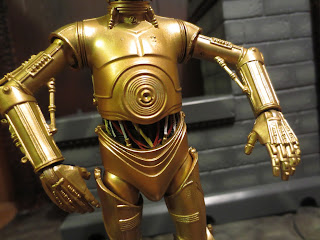 * Besides this version of C-3PO obviously having two gold arms, the second difference is that the wires on the midsection are completely different. This C-3PO actually has fewer wires than the Resistance Base version from The Force Awakens. Not really sure why this is (or how accurate it is; looking at a few pictures really didn't help) but it's still nice that there's something physically different between the two figures. 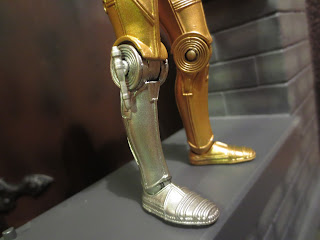 * The third difference between the two figures is that this C-3PO has the silver lower right leg and foot that many people seem to not remember. This definitely marks this C-3PO as an Original Trilogy version and not a Revenge of the Sith version. Hey, there's another repaint down the line! 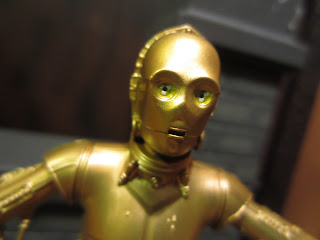 I'm giving this C-3PO the same Great and a 1/2 rating I gave the Resistance Base version, as he's still a terrific action figure. Yes, I wish he came apart, or included an Ewok throne or a bag for Chewbacca to carry him in, but he's still a nice figure. I like the attention to detail on this guy, as even if he isn't 100% movie accurate, he certainly feels very true to the character. Walgreen's has done a swell job so far with stocking their exclusives so hopefully this guy is hitting most stores in sizable numbers now. Hasbro really should have put out a new R2-D2 t go along with him, though.


For more Black Series figures from Phase III, check out the following: