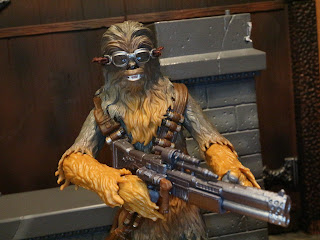 The Solo: A Star Wars Story product has rolled out a lot more haphazardly than the previous product launches for the new Disney films. Street dates were unclear, distribution is even spottier than usual, and it is very unclear as to which exclusives are available at which retails. Perhaps the most easily found exclusive is this very cool Chewbacca that you can purchase at Target. I found mine fairly easily last week and, from what other collectors are saying, you shouldn't have much trouble either. I was really excited for this one because it actually offers a slightly different look for Chewbacca. In the past we've had Chewbacca with snow on his fur, C-3PO on his back, or various chains (both in disguise as Boushh's prisoner and in disguise in manacles on the Death Star) but rarely do we get something feels like a new uniform. Having Chewbacca with a completely new bandolier and goggles almost gives me the same feeling as the 1996 Chewbacca in Snoova disguise figure from the POTF2 Shadows of the Empire line. I really like this figure and I'm excited to talk more about him after the break... 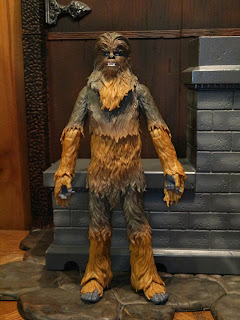 Accessories: Blaster rifle with removable fore-end and side handle, goggles, and bandolier. 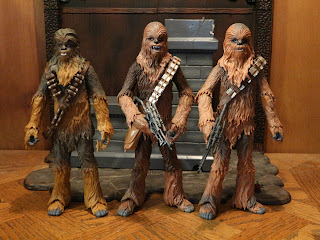 * On the left is the new Solo Chewbacca followed by the Phase II Original Trilogy release and the Episode VII Chewie from Phase III. While the limbs are the same as previous releases, the new Chewie has a new torso, new headsculpt, and is shorter. In this case, being shorter is more accurate as the other figures were too tall. 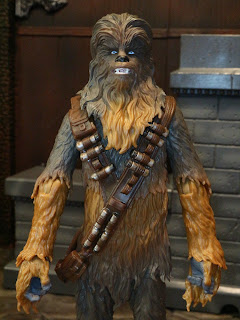 * This is a great looking Chewbacca. The colors are more accurate, the sculpt is better, and the new bandolier looks awesome. I love this figure and I'm pretty convinced he is my favorite Chewbacca released in the Black Series yet. 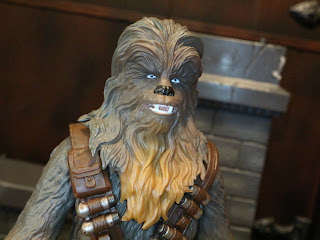 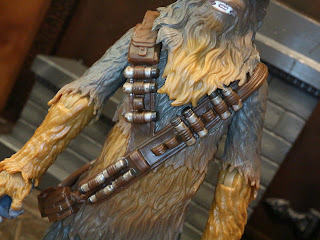 * Chewbacca is sporting a new bandolier for Solo. Well, an old bandolier, I guess, since Solo is a prequel to the Original Trilogy. But it's not a "Prequel" prequel. It's a....inter-trilogy tale. Anyways, it looks awesome and stays on extremely well. I love the shell like projectiles or cartridges Chewie's carrying here. He has his familiar pouch on the back, too. I've hear rumors of a variant that has shells on both the front and back (mine only has shells on the front straps of the bandolier). 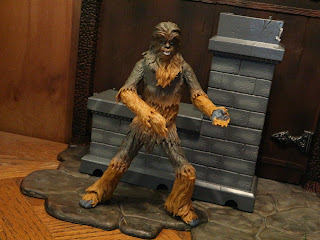 * I do have a few problems with Chewie's articulation, but I'll address them in a minute. For now, I want to appreciate the quality and durability of the figure and the better range of motion for Chewie's mid-torso joint and head. It's nice to see Hasbro offer improvements in the line over time. 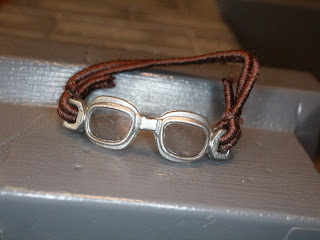 * Chewbacca has some very cool accessories and one of those is a pair of goggles that can easily slip over his head. They actually use an elastic band so he can comfortably wear them up on his forehead or over his eyes. They look excellent on him and add a cool, new look to the character. 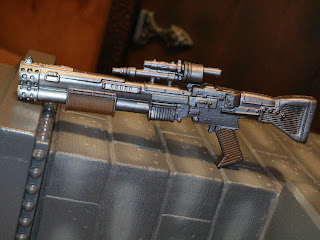 * Another cool accessory is this incredible rifle that Chewbacca comes with. It resembles some sort of tactical shotgun and, in-universe, it presumably is some sort of slug thrower. The sculpt is excellent as are the colors. It's molded in a great gunmetal silver with brown paint applications on the fore-head slide and the grip. 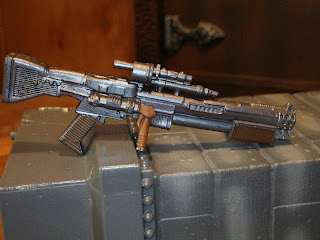 * On the other side you can actually see that this gun has some cool features: There is a side handle that can pivot out (it is removable if you slide it out the front) and the fore-end slide can "pump" back and forth, as if Chewbacca is racking another cartridge. I love how interactive the rifle is and I cannot wait to see it in action in the film. 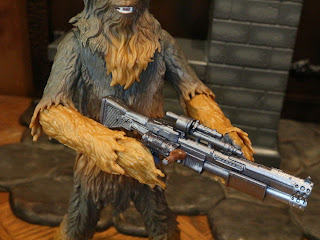 * Since the limbs are reused from the previous Chewbacca figures, Chewbacca still has a tough time getting a good two-handed grip on his weapons. The left hand isn't designed to cradle the blaster well and the elbows don't offer a huge range of motion. These really need to be fixed at some point for future Chewies. 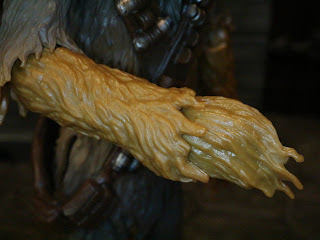 * I like the colors better on this figure than on previous ones but I still wish Hasbro would use a wash or drybrush effect on more of the figure to better replicate the complex patterns of Wookie fur. 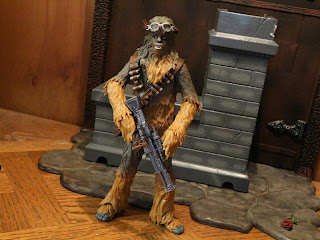 I really like this Great figure and, due to the improvements to the figure and the cool accessories, this guy is easily my favorite Black Series Chewbacca. That being said, there is still room for improvement. Hasbro addressed many of the previous problems with the character's earlier releases (too tall, limited head articulation) but they still need to address the problematic elbows and the still "not quite there" paint scheme. That doesn't mean this one isn't a fun figure, though: A massive Wookie wielding a rifle and goggles is always a recipe for fun!

For more figures from Star Wars: The Black Series Phase III, check out the following: