Welcome back to another installment of Barbecue's Bonfire, a chance for me to lazily chat about some of the stuff I've been up to this week without having to make a full post about each item. On February 1st I'm going to be starting back the monthly Masters of the Universe review spotlights. Remember Moss May? How about June Adventures? Trap Jaw-ly? A new one starts February 1st so check back to find out what it is! Also, I'm working on finishing up my annual Best of the Year awards where I'm looking back at some of my favorite action figures and toys of 2020. This week's installment of Barbecue's Bonfire seems a little busier than usual. Why's that? Well, first, there was a really cool Funko POP! reveal this week I wanted to show off... 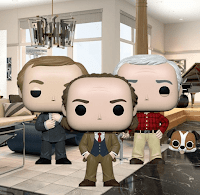 Frasier POP! vinyls from Funko. Yes, Frasier. My wife and I love Frasier. When it was on streaming we'd generally always be watching through it and whenever we'd watch the last episode we would go ahead and start the first episode immediately afterwards to begin the cycle again, kind of like Roland's quest for the Dark Tower, I guess. They look fantastic, especially Martin Crane with Eddie, but I'm a bit perplexed that they didn't make Daphne Moon. How could they pass her up? I can't think of any sitcom I own POP! vinyls from offhand but Frasier definitely encouraged us to preorder right away. I think they're scheduled for release in May.

More interesting (and uninteresting) stuff from this week after the break... 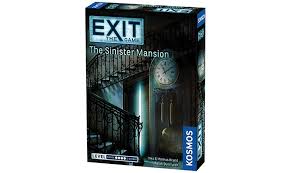 * We got together with my parents over the weekend to play another Exit: The Game: The Sinister Mansion. Of the three we've played so far this one was definitely my favorite. The puzzles were quite logical and anytime we were wrong it felt like it was because we simply missed something. The flow of this one is much more like a traditional room escape game as you're trapped in the titular mansion and move between a couple different rooms. 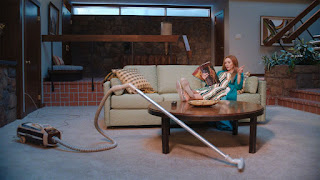 For TV this week I of course watched episode 3 of WandaVision. Now set in a 1970s sitcom, this week's episode definitely jumped the story forward. We watched this one with my 7 year old who thought it was hilarious, especially the stork (she didn't see the first two episodes). It's interesting how much many Easter eggs and plot points my Marvel reading friends are picking up on as I'm a bit in the weeds. I'm not in the camp that speculates Mephisto is behind this, he brought back Vision at Wanda's asking, and SWORD has the whole area where this pocket dimension is located blocked off, hoping that Geraldine will be able to pull Wanda out before something terrible happens (presumably whatever Mephisto wants in return. Maybe the kids?). I'm all geared up for tonight's episode. 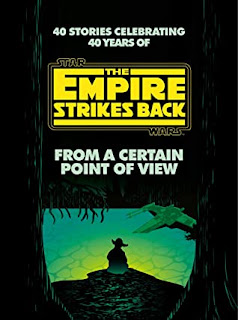 From A Certain Point of View: The Empire Strikes Back came out in November but I just got around to reading it. Featuring 40 different stories from 40 different authors from the perspectives of 40 different non-main characters, it's an interesting way to look at the greatest Star Wars film of them all. Not every story is a hit but I like the concept and, for the most part, I enjoyed the stories, especially seeing how they intersected with key points in the film. Some of the stories are just solid tales that feel like they fit in perfectly with what we know while others find ways to weave in known non-film characters (Rae Sloane, L3-37Jaxxon) into the story. There are a few groan inducing ones, too, though, but none I recall flat out disliking. They remind me of the old "Tales From" series released in the mid-90s. Tales from Jabba's Palace was the first Expanded Universe book I ever read and I still vividly remember walking out of Target with it back in 1995 after my mom bought it for me. 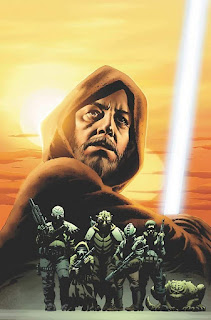 I also read the November release Star wars: From the Journals of Obi-Wan Kenobi. Well, read it again I should say. I didn't realize this was a reprint of the B stories from earlier Marvel Star Wars issues. Fortunately, these tales from Obi-Wan Kenobi's journal (there's a really good Yoda story, too) by Jason Aaron are excellent with some fantastic art. Salvador Larroca and Edgard Delgado are amazing! Anyways, the bulk of the stories capture various tales taking place during Obi-Wan's time on Tatooine as he wrestles with  how to "not be" a Jedi in the face of the tyranny of Jabba the Hutt and other gangsters who threaten the people of the desert planet while also focusing on how to best protect a young Luke Skywalker. Yoda's tale is also one of my favorites from the previous era of the main Marvel Star Wars title as it really gives the Jedi Master a chance to show multiple sides of his personality. Aaron has an excellent grasp of believably writing these characters and these are pure joy for fans of the films. If you don't already own these stories in single issues or trade paperbacks, this one is worth picking up. Had I know I already owned these I probably would have skipped it but it does make reading these tales much easier. 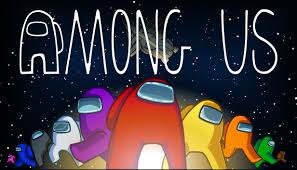 From the various YouTube shows my daughter watches it seems that everyone is playing Among Us. Released in 2018 by Innersloth, Among Us was just released for Nintendo Switch in December, which is how we're playing it. My daughter was super interested in this game and, so far, she's enjoying it. It's a multiplayer game where a group of crewmates on a spaceship are trying to complete their tasks while a randomly selected impostor tries to sabotage the ship and kill of players. It's kind of like The Thing or Alien, but much "cuter" and kid friendly. The game reminds me of the popular parlor game Mafia (or Werewolf) where an unknown player tries to "kill off" other players and convince other players that they're not the culprit. It's fun and pretty quick to learn. There's no combat, really. It's about watching other players, using the limited text system to communicate, and planning how to do tasks and when. I'm not sure that I find it as great as any others (it's kind of a one note game) but it is short and you can easily play multiple games in a brief gaming session.

As always, let's take a look at the most popular reviews of the week on Action Figure Barbecue:
Lords of Power from Masters of the Universe Origins was the 2020 PowerCon exclusive set based on the prototypes for the vintage MOTU line when the line was still going to be called Lords of Power. The set is on its third week on the list and while it was way, way too expensive, it's also pretty cool for fans who take interest in the development of MOTU. MOTU Origins looks like it's going to have a big year in 2021 and that very well may drive up demand for this set.
Darth Nihilus from Star Wars: The Black Series was one of the 2020 GameStop exclusive Gaming Greats releases and he turned out to be a pretty cool figure, now on the list for his third week. Knights of the Old Republic has stayed very popular (I'd love a remastered release of the series on the Switch or X-Box One) and perhaps the interest in the High Republic era or the fan-edits of the cutscenes into films has driven interest in this Sith Lord.
Phase I Clone Trooper from Star Wars: The Black Series is a completely new sculpt of the standard Clone Trooper for Phase IV of The Black Series. Hasbro has recently released complete resculpts of both the Clone Trooper and the Stormtrooper, which is quite welcome. Both of those troops originally came out in Phase I in 2014, so they were getting a bit dated. Fans must appreciate the effort as this is the Clone Trooper's second week on the list.
Mr. T from Masters of the WWE Universe is a Masters of the Universe themed Mr. T action figure. Do I really need to say anything else? Seriously, he's amazing. I love Mr. T! Me and my wife's anniversary is on Mr. T's birthday? Coincidence? She thinks so! I pity the fool who don't acknowledge that this is Mr. T's second week on the list!
Sith Trooper (Holiday Edition) from Star Wars: The Black Series is apparently giving some folks a reason to still celebrate. The Holiday Edition subset really seemed to be quite popular (more than I thought it would be) and all of these figures have been fairly difficult to acquire.

Clone Trooper (Holiday Edition) from Star Wars: The Black Series is a festive repaint of the standard Clone Trooper packed with a Porg in a scarf and a giant candy cane of death. He's actually my least favorite of the Holiday Edition figures I've found so far but he's still fun to have around. This is his second week on the list though he dropped a bit.

Have an awesome week! Thanks for stopping by! Please let me know what cool stuff you've been checking out this week as well. It's always fun to discuss!
Have a great weekend everyone! Stay safe, enjoy WandaVision, read something cool, and enjoy life!