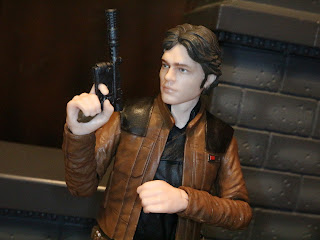 We're just a few weeks away from the impending release of Solo: A Star Wars Story and it's time to check out one of the big guns: Han Solo himself! I think one of the things many Star Wars fans never really prepared themselves for was to see one of the Original Trilogy's big three recast. Other than technically seeing Luke and Leia as babies in Revenge of the Sith, Alden Ehrenreich is the first of the main three to truly be portrayed by a different actor. While Solo seems to have had a troubled production history, everything we've seen over the past 4 months has me very, very optimistic about the film. I'm hoping for a slick, fast-paced caper film set in a galaxy far, far away and, hopefully, Ehrenreich is able to pull off leading it up. Only one figure of this younger version of Han has been announced for the Black Series and this is it. Let's check out this new version of Han Solo after the break... 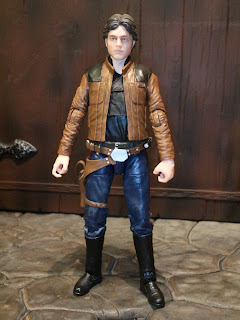 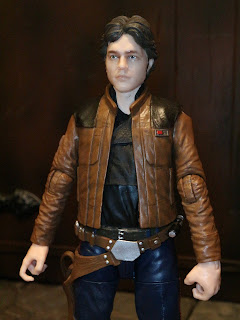 * I really like the costuming for Solo from everything we've seen so far and Han's outfit offers up something new while still feeling like a Han Solo outfit. The brown jacket is pretty cool and has a timeless fashion to it, which seems to be a quality we see in Han's wardrobe. The jacket isn't really intended to be removable as the sleeves are sculpted, but the design of using a jacket "shell" does allow for a more three-dimensional, layered look so you can see Han's black shirt underneath. If you feel compelled and just can't handle someone else playing Han Solo, you could definitely throw a standard Harrison Ford Han head on this and have your own Han Solo Adventures version of the character, I imagine. 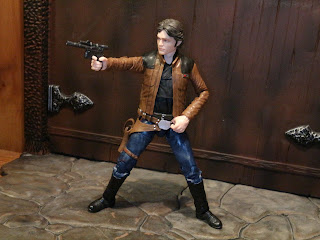 * The articulation is pretty darn near perfect on this one. Hasbro has a great articulation model for the Black Series and it feels like just the right mixture of form and function to make these figures fun to pose while looking great on display. The double balljointed heads Hasbro has been using lately are just fantastic, too. 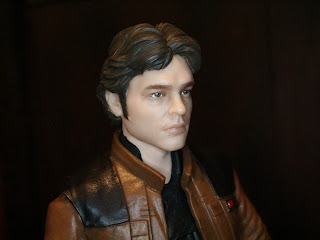 * Does this figure look like Alden Ehrenreich? Yes! Does this figure kind of look like Han Solo, only a few years younger? Definitely. While Ehrenreich isn't the spitting image of Han, I think the figure's portrait does a great job of looking like Ehrenreich and a younger Han Solo. The face printing is excellent here, as is the hair. Great detail work on the hair. 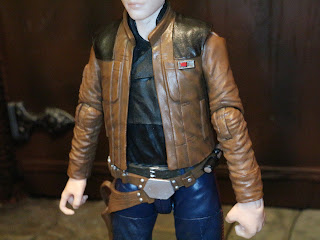 * The jacket itself has a cool little doodad or something on the front, some nicely sculpted wrinkles and such, and a nice light wash to add some depth to it. 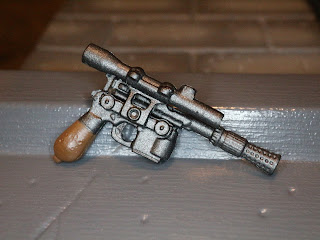 * Han comes with his signature DL-44 heavy blaster pistol. It has some great detail (notice the little holes in the muzzle of the barrel) and nice coloring and paintwork. 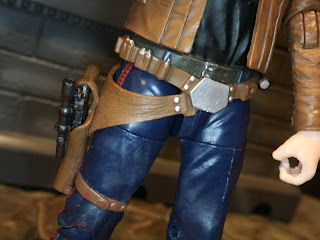 * Han is also sporting his signature holster complete with all of the little extra items on it and a working holster that fits the DL-44 perfectly. 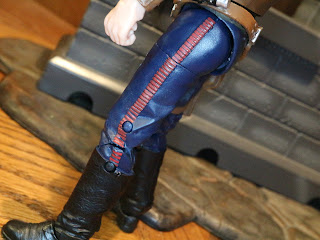 * Han has an affinity for these pants with stripes on the sides, doesn't he? Here Han is wearing the blue pants with red strips up the legs that look mighty similar to the ones he wore in Episode IV. 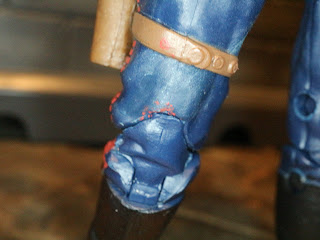 * My only complaint here is that there are some odd, errant paint marks on my Han's right knee. Did he kneel down in blood? Was he eating some spicy space Cheetos and he rubbed his hands on his pants? 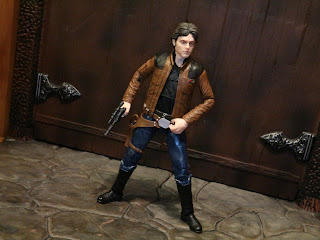 Han Solo is a quality figure and another incredible release in the Black Series. Hasbro is doing an excellent job with this line and, at this point, my only problems with the line are distribution and character selection (Hasbro needs to be cranking out way more figures than they are; Marvel Legends shows what they're capable of). Yeah, Han could have used another accessory or two (you can always, always give a figure another blaster) but in the end he's still a Great and a 1/2 figure and another fine addition to Phase III of this ever growing line.