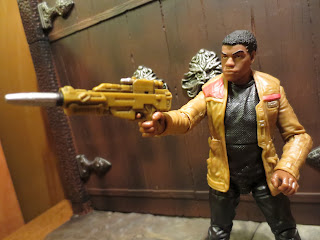 Who is Finn? That's a question that most of us have been pondering since last year when he was first revealed in the teaser trailer. We know he's a former First Order Stormtrooper (designation FN-2187) who meets Rey on Jakku, joins the resistance, and at some point wields Anakin Skywalker's lightsaber (the one Luke lost on Bespin) against Kylo Ren. That's it. While a number of characters from the Force Awakens have had their full names revealed (Poe Dameron, Maz Kanata, Sarco Plank), Finn's has been kept secret. Like Rey, it seems heavily implied that Finn might have some relationship to a character or characters we already know. Regardless of his background, Finn's future seems to be set as being of the main cast in the new Star Wars adventures set 30 years after the Battle of Endor. Finn was released as part of the first series of The Black Series Phase III and has been on shelves for a few months. Honestly, he's been a bit of a peg-warmer to some degree, but I'm sure that will change once we learn more about him. Let's take a closer look at Finn, shall we? 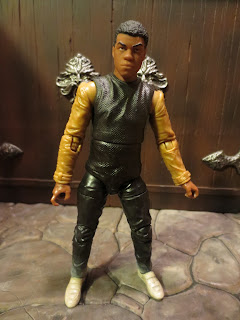 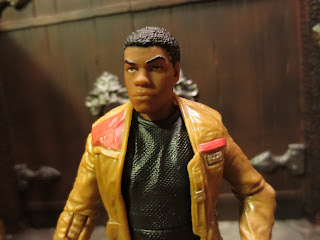 * I absolutely love Finn's headsculpt. This is a really good likeness of actor John Boyega and it seems to capture the intensity that he gives to Finn in the trailers we have seen so far. Hasbro doesn't always do a great job with human portraits in this line but I think they've done a pretty nice job with Finn. 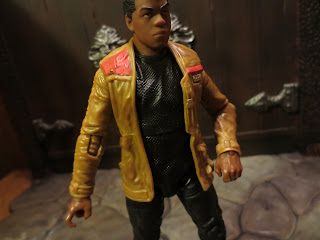 * I absolutely love this outfit. It seems to pretty similar to what other members of the Resistance are wearing but there's some added personalization with the all black shirt under the jacket. Is this the body suit from Finn's Stormtrooper outfit? When I look at this outfit, I absolutely see shades of Luke's ceremonial outfit from the end of A New Hope. That's probably my favorite Luke Skywalker outfit (the Bespin fatigues are definitely a close second) and I'm thrilled that Finn is wearing something similar, but different, here. 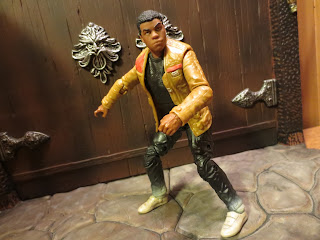 * I'm going to mention a problem with Finn's shoulders in a minute but, for the most part, I like the articulation on this figure. Hasbro has consistently put out some very nicely articulated figures in this line that feel quite durable. These could absolutely played with like kids with little fear of breakage. Something about the quality of the plastic on these reminds me of the Power of the Force 2 figures. 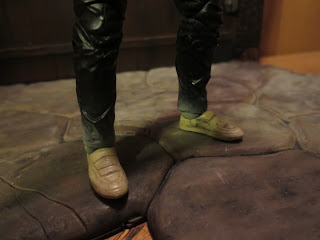 * Since this figure is intended to represent Finn during his time on Jakku (the desert planet seen in all of the trailers) his boots and pant legs have a nice scattering of sand on them. It's an effective little paint app and adds some character to the figure. 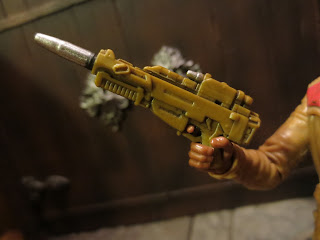 * This is a really flippin' cool blaster pistol. It looks like a shorter version of the blaster rifle that the Target exclusive two-pack Poe Dameron comes with. It has a nice sculpt, some great paint highlights, and a wash to bring out all of the details. Finn looks awesome wielding this weapon! I just can't wait to find out what it's officially called. 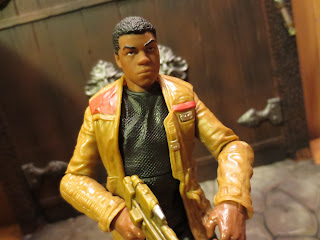 * Making Finn's jacket a separate vest-like piece over his torso definitely gives the figure a nicer look but it does limit the swivel/hinge shoudler joints. Unlike most other figures in the Black Series, Finn cannot easily put his hands close together to hold a weapon with both hands. If this guy ever gets used for a version of Finn with a Lightsaber, let's hope Hasbro does a little retooling. Speaking of a Lightsaber... 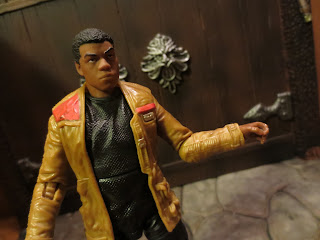 * I really wish Hasbro had included a Lightsaber with Finn. We've seen it not only in the trailers but also on the official movie poster. Maybe he doesn't wield it at this point in the film (we've been told that the toy product released so far comes from the first 1/3 of the film) but I think it still would have been a smart idea. It'd add more value and definitely help the figure connect with buyers. 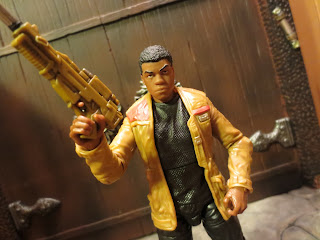 Finn is a really good figure. While we don't know much about the character yet, Hasbro has offered up an extremely solid and fun figure of the character to whet our appetites for the film. While the shoulder articulation is somewhat limited and he feels a bit light on accessories (especially considering that Rey comes with BB-8), Finn is still quite good. It's pretty fun reviewing these figures while knowing little to nothing about the characters. It's also helping to make the wait for The Force Awakens more fun! I'm giving Finn a Good and a 1/2 rating.


This is the first Finn figure I've reviewed. I have reviewed plenty of other figures from Star Wars: The Black Series, though, including: