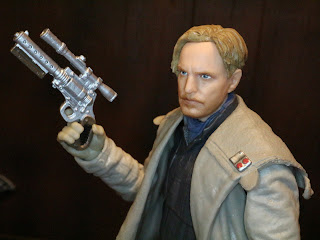 While we're almost two years out from the release of Rogue One we still don't have an action figure of Bodhi Rook yet, leaving our Rogue One crew incomplete. Fortunately, Hasbro doesn't seem like they're going to let the crew of the film Solo suffer the same fate as Tobias Beckett has arrived with Val and Rio Durant are the works (yeah, Korso is probably a long shot but I really can't even remember him from the film so I doubt most others do, too). While it is a bit odd that Hasbro is spacing the Solo figures out so much it is tough to argue that they're not putting tremendous effort into them. Tobias Beckett is another figure that uses the new faceprinting technology that Hasbro has introduced to the Black Series this year with great results. It makes for a really cool figure which is, I believe, the first official Woody Harrelson action figure (barring the Funko POP! Becketts and some unlicensed renditions of Harrelson's character Tallahassee from Zombieland). Sadly, Solo is one of the best Star Wars offerings we've had and yet folks largely seemed to ignore it even though it is filled with cool, underworld fringe characters, bounty hunters, and scoundrels. Let's take a look at this great action figure of Han's mentor after the break... 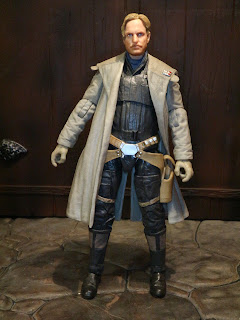 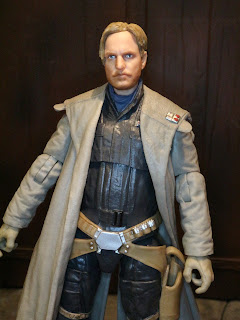 * Beckett is wearing a pretty cool outfit that manages to look like a typical Star Wars underworld-dwelling scoundrel while also having a bit of an Old West vibe to it thanks to the presence of the duster styled trench coat. Hasbro has done a nice job on characters with more complex or layered outfits and Tobias Beckett is another winner. You can see the shirt (or maybe it's a handkerchief) popping up from the collar of his jumpsuit while the duster covers everything nicely. Wile there aren't a ton of bright colors, the outfit manages to jump out and look pretty interesting visually. I definitely have liked the costuming of the side stories more than the costuming of the Sequels Trilogy, other than Rey, who just looks fantastic. 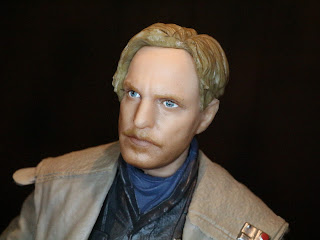 * The headsculpt and faceprinting is pretty good and looks quite a bit like Woody Harrelson. It's not the best in the line but it's still incredibly solid work. I think Woody Harrelson may just be one of those folks whose likeness is a bit more difficult to capture. Still, the work on the eyes, hair, and facial features is really well done. 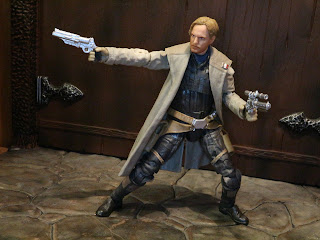 * Tobias is another solid entry and features the same great articulation scheme that most of the line does. He's solid, sturdy, and looks incredibly slick when dual wielding his two blaster pistols. 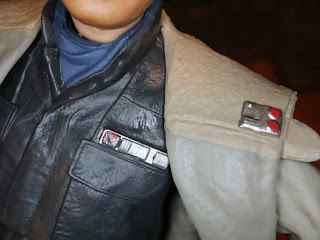 * I love the detail on the two smaller panels/ communicators on Tobias' jacket and jumpsuit. I don't know specifically what they are for but I love the work on them. Little stuff like this just makes Star Wars feel incredibly cool, you know? 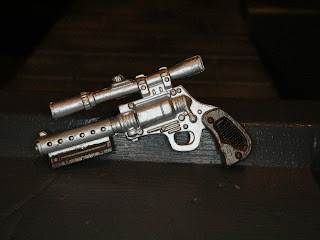 * Tobias has two of the coolest blaster pistols I've ever seen in Star Wars this side of Cad Bane's awesome western inspired kit (dang, we really need a Black Series Cad Bane, don't we?). First up is Beckett's Blastech Sideloader DG-29 Heavy Blaster. I love the look of this 'revolver' styled blaster pistol. Not only is the sculpt dead on accurate but the paint details also help this one to stand out from the back. Incredible stuff! 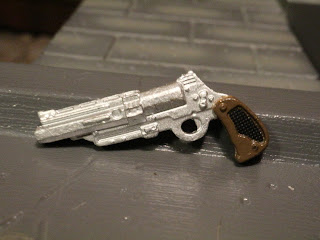 * Secondly, Beckett comes with a Blastech RSKF-44 Heavy Blaster. The paintwork and sculpt are also solid on this one, which looks like a small sawed-ed off shotgun due to its side by side barrels. Apparently Beckett is ambidextrous and can wield two weapons at once quite easily. 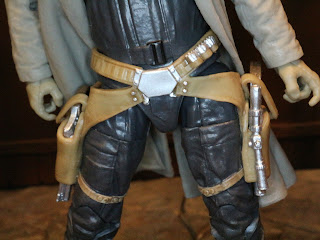 * Beckett's belt is kind of similar to Han's which is a neat feature. Beckett has two holsters, though, which can hold both of the pistols securely in place. 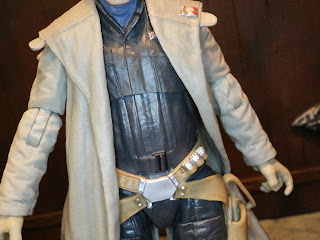 * The only think that I would count as a flaw on this figure is that the mid-torso joint is right in the middle of Beckett's chest rather than being a bit lower. I prefer the lower joints, maybe closer to the waist, as they look better. 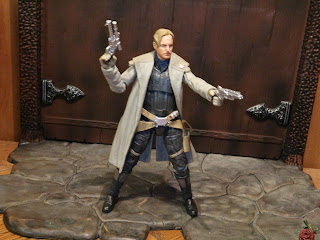 Tobias Beckett is another solid figure in the Black Series which has pretty much racked up hit after hit this year. Hasbro has done a great job with all of the Solo releases for this line and I'm hoping they keep offering characters from the film despite its initial lackluster reception (hopefully it will gain some more fans on home video and streaming) Beckett is a Great and a 1/2 figure with a cool outfit, solid articulation, and two of the best accessories in the line. He's definitely worth tracking down. You'll want to shoot first on getting this one, if you know what I mean.


This is the first Tobias Beckett toy I have checked out. For more Star Wars Black Series toys, check out the following: