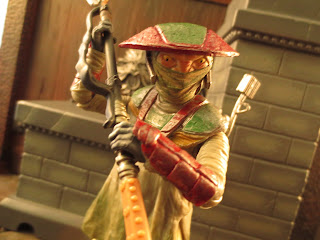 Today I'm reviewing one of the stars of last year's hit film Star Wars: The Force Awakens: Constable Zuvio! Wait, you don't remember Constable Zuvio? That's OK. It turns out, he's not actually in the movie. Because of whatever weird setup Disney and license holders had, Hasbro ended up cranking out a character in the second series of the Black Series Phase III that didn't even appear in the film. I don't mean that Zuvio is a background character. I mean that he literally was completely cut from the film. Originally Zuvio was supposed to have some sort of a role as a law enforcement official at Niima Outpost who helped Rey escape from Unkar, but somewhere along the way he got cut. So, where does Zuvio appear? Well, he was featured in Entertainment Weekly a month or two before the film was released, and then there is a short story about him called "High Noon on Jakku."He also appears in a number of side books such as the various coloring books and the visual dictionary. While a lot of folks are down on Constable Zuvio, he looks like he would have been a great character in the film. It seems like Hasbro kind of got shafted by producing him, though, as they probably thought he would be somewhat of a memorable character but now there have been a number of reports of him peg-warming (not something I've witnessed at all). Is Zuvio going to be a pegwarmer no one ever wants or is he going to end up being a rare, mysterious figure everyone talks about someday in the future? That's to be determined later! For now, let's look closer at the figure... 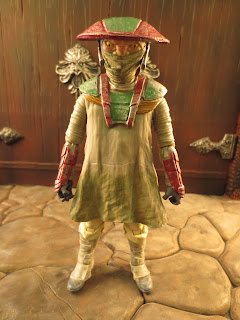 Accessories: Vibro-halberd and a sensor pack. 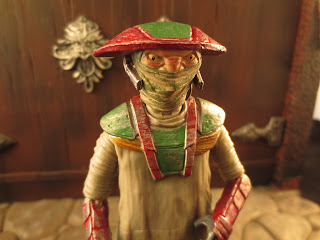 * One of the things that does stand out about this figure is that he looks really impressive. Constable Zuvio is a Kyuzo, like Embo from Clone Wars, and thus has a similar rounded helmet. He also has some bright yellow eyes and looks pissed off as all get out.  What'cha mad about Zuvio? Getting left on the cutting room, floor? 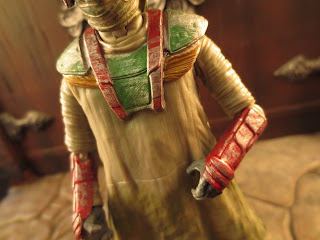 * The paint work on Constable Zuvio is really nice. His armor has some excellent weathering on top of the metallic paint it's been gven. Furthermore, Zuvio's robes look really worn and dirty. He's definitely one of the better looking figures in the Black Series. 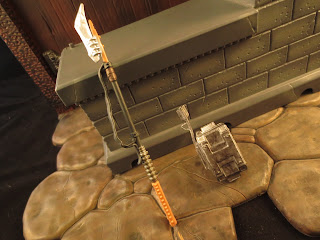 * Constable Zuvio comes with two accessories: His sensor pack and a vibro-halberd. The vibro-halberd is an awesome battle staff weapon. It's nearly as tall as Zuvio himself and looks like a cool, cobbled together weapon. There's a strap that can be used to sling it over Zuvio's shoulder, although it doesn't incredibly well. Still, the paint apps and sculpting on the halberd are top notch. Really good looking stuff here! 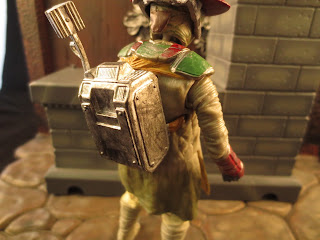 * I love how Zuvio's sensor pack attaches to his back. There's a traditional plug but there are also two "belts" that slip into the back of his cloak, making it look like his pack actually has straps. The backpack has some excellent weathering effects and looks very original trilogyish. 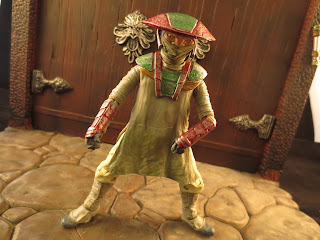 * Zuvio's articulation feels very limited. Not just in his legs (which are really stiff and hampered by his cloak) but his shoulders also feel like they're tucked a bit too far into the sockets. He's not poorly articulated, but he feels limited in some ways that should have been easy to avoid. 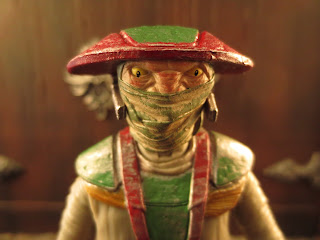 * Is it just me or does Zuvio's face look a bit smooshed? Not majorly smooshed, but definitely a bit flat compared to the few shots of the character from the film. It still looks good, but it definitely could look better. 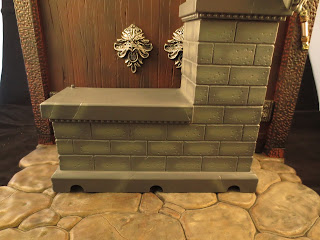 * Here's a picture recreating Constable Zuvio's most memorable scene from the film. Yup. Nothing.

I'm not going to dock the figure for this but Hasbro really needs to work something out with Disney if they're going to keep releasing Star Wars figures every year for new films. I like this figure, but Hasbro should have had a better idea about other characters. I mean, we've had Toy Fair 2016 pass now with no announcement of a Black Series Maz Kanata, Rey w/ a lightsaber, Luke, Leia, Supreme Leader Snoke, Unkar Plutt, Nien Numb, Sidon Ithano, or anyone else who actually did anything in the film, but we have a figure of Constable Zuvio? There's a major problem here, don't you think? 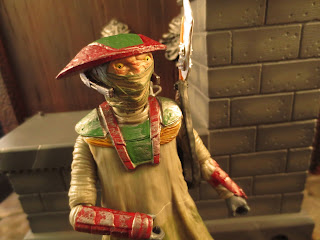 I'll admit that after spending a good deal of time coloring with my little one in her The Force Awaken coloring book before the film's release, I was really excited to see Constable Zuvio on the screen. Well, we know how that turned out. Still, despite this being a really odd choice for a figure in the Black Series, it's still a nice figure. He's a sold Good and a 1/2 figure, although I doubt many fans will consider him necessary. He still has a very Star Wars-ish look to him and should help round out a Black Series display nicely, but unless we get some deleted scenes or a special edition Blu-Ray of The Force Awakens, Zuvio will remain an enigma. He'll always be that guy who was supposed to be in The Force Awakens. This will either make this figure go down in history as a joke or he'll become a rarity among collectors. We'll just have to wait and see which way the pendulum swings for Constable Zuvio!