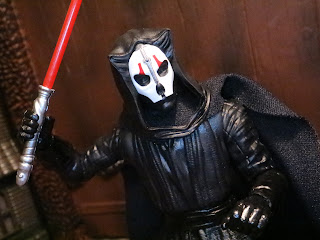 It's the last day of the year and while I'm not nearly through with reviewing all of the stuff I picked up in the last month yet I'm going to wrap things up for the year with a look at Darth Nihilus from Star Wars: The Black Series Phase III. While Hasbro transitioned the Black Series into Phase IV during the second half of 2020 some exclusives were still released in the Phase III packaging. GameStop's Gaming Greats releases in 2020 turned out to be well worth checking out in 2020 and while they were mostly repaints/ retools, they did offer up some new characters. One of the most exciting releases is Darth Nihilus from 2004's Star Wars: Knights of the Old Republic II: The Sith Lords. I have very fond memories of receiving the game for Christmas of 2004 and starting it the day that my friends and I went to get fitted for tuxedos for my wedding in 2005! The KOTOR games were quite impressive and I'd love the chance to play them again on a more modern console. Darth Nihilus's creepy mask was a key element of the game's packaging and advertising and Hasbro nailed it here. Let's check out another Sith Lord for the Black Series after the break... 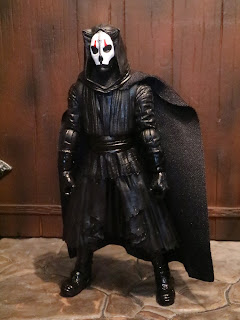 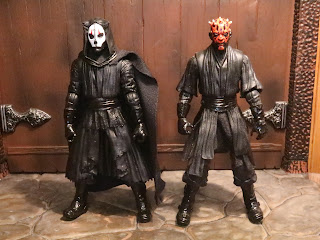 * Why do I have a comparison between Darth Nihilus (left) and Darth Maul (right)? Because Darth Nihilus shares most of the body and limbs with Darth Maul, the first Black Series figure I ever bought back in 2013. The reuse works well, though, and if you didn't know about it you'd probably never notice. There are new parts, too, though: The lower robe, upper arms, cape, and head, of course. 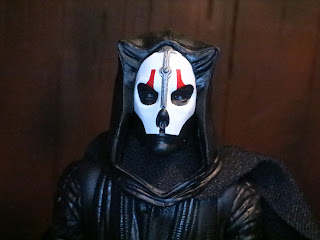 * Darth Nihilus' mask is really cool and really creepy! Apparently it was based on the character No-Face from the Hayao Miyazaki film Spirited Away (which I've never seen). It's a very creepy, almost theatrical look. It reminds me of something from a kabuki performance. The mask is really nicely detailed with fantastic paint apps. 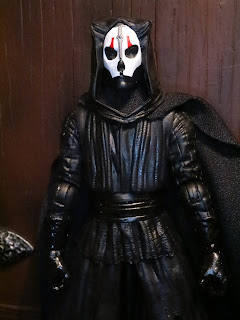 * The rest of Darth Nihilus' outfit is pretty simple but effective. He's wearing black robes, just like Darth Maul. The upper arms are different and new, as is his lower robe. It's a bit longer and more tattered on the bottom. 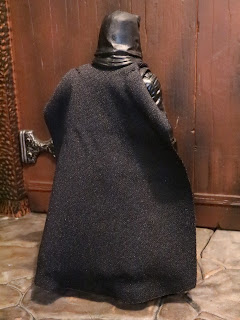 * Darth Nihilus' cape is soft goods and it looks really fantastic. It's a quality piece and really helps to ensure that he can hold more extreme poses. 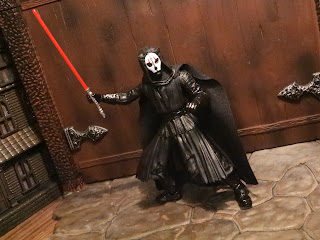 * I liked Darth Maul's articulation back in 2013 and while most of the figure is now a little over 7 years old, it's actually still pretty solid. Darth Maul has held up quite well and while there are newer updates to the articulation model missing here, I don't feel that it really detracts from the articulation. This guy is still quite durable and fun to pose in various menacing ways. 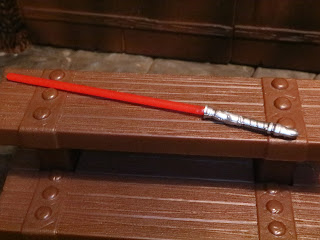 * Darth Nihilus comes with his lightsaber. It has a very ornate hilt and a translucent blade. It's a red lightsaber, alright. 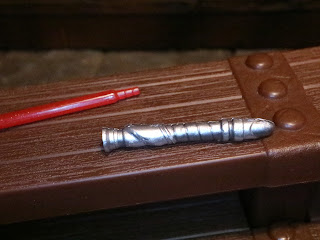 * Not only is the blade removable (like every other lightsaber in the line) but it also has a plug that fits into the hilt and can be removed much more easily. How about that! 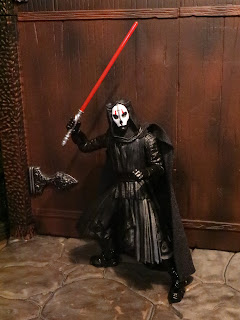 For being a "Franken-figure" Darth Nihilus turned out really well. He's a Great figure and should be pretty desirable. Star Wars Legends still has a lot of fans and Knights of the Old Republic is definitely one of the most popular non-film Star Wars products ever. It's nice to see Hasbro mining various sources, both canon and non-canon, for great Star Wars characters. Darth Nihilus was a solid choice and another hit for the Gaming Greats subset. I do hope the Gaming Greats subset continues into Phase IV of the Black Series as the Knights of the Old Republic series alone could keep the line going. Which characters from KOTOR or other Star Wars games do you most want to see in the GameStop exclusive Gaming Greats collection? I really want Kyle Katarn and Jan Ors from Dark Forces. Those would be dream figures for me!